This is part 2 of a 3-part series taking an in-depth look at how 5G pioneers have evolved their approaches to commercialisation since launch, navigating a maze of factors such as handset availability, technology immaturity and more. What should others take from their experience to date?

Verizon: Payback for the 5G pioneer?

SK Telecom (SKT), Verizon and Telstra were among the first in the world to commence the commercialisation of 5G networks. SK Telecom and Verizon launched broadband-based propositions in 2018, but it was only in 2019, when 5G smartphones became available, that consumer, business and enterprise customers were really able to experience the networks.
Part 2 of our 3-part series looks at Verizon’s 5G experience and how its propositions have developed from when 5G was launched to the current time. It includes an analysis of both consumer and business offerings promoted on Verizon’s website to identify the revenue streams that 5G is supporting now – as opposed to revenues that new 5G use cases might deliver in future. (We have covered this extensively for a number of verticals, including healthcare, manufacturing, energy, and transport and logistics.)

Initially, Verizon had hoped to charge a $10 monthly fee for existing 4G subscribers to access its millimetre Wave (mmWave) 5G Ultra Wideband (UWB) service, however it waived this fee due to a lack of devices and limited coverage at launch in April 2019. 5G access was offered as a benefit for customers on its top two Unlimited data plans, which promised unlimited 5G UWB data, unlimited 4K HD streaming and unlimited 5G UWB hotspot. It emphasized capacity advantages of 5G as well as its ability to offer an improved video experience.

Verizon’s choice of 5G spectrum (mmWave) was guided by its intention to offer customers a differentiating 5G experience, but it has added complexity to its 5G propositions and initial limited coverage has impacted its competitive position in the market.

This report examines the market factors that have enabled and constrained Verizon’s 5G monetisation efforts, as it moves to extend 5G access beyond early device adopters to a wider audience. It identifies lessons in the commercialisation of 5G for those operators that are on their own 5G journeys and those that have yet to start.

This analysis is based on the latest data available as we went to press in May 2021.

An early benefit of moving to 5G for Verizon was to reduce costs and increase efficiency. On this score, Verizon reports that it is on track to achieving its $10 billion cost reduction target, ahead of the scheduled end-2021 timeframe (as set out in September 2017).

On the fourth quarter 2020 earnings call, CEO Hans Vestberg claimed there had been a “great migration of our customers [consumer] to Unlimited and to the premium Unlimited” plans, resulting in over 60% (57 million subscribers) of Verizon’s base being on an Unlimited plan and over 20% (19 million) being on premium plans (5G Ultra Wideband – UWB – inclusive). The appeal of 5G is not thought to be the primary driver of this trend (only 9% of the postpay base had a 5G device in December 2020 ):

Quarter one 2021 results indicate that the migration to premium plans has continued. Matt Ellis, Verizon EVP and CFO announced that “At quarter end, over 65% of our base was on an Unlimited plan with more than 23% of our base taking a premium plan” . The “5G adoption rate” was reported to be 14% of the consumer postpay subscriber base (12.6 million subscribers). 5G access (5G UWB in particular) may become a more important driver of upgrades to higher value plans in future, particularly as it becomes more widely available (mid-band inclusive) and there are more obvious benefits to consumers (services).

Upgrades have succeeded in driving average revenue per account (ARPA), which reportedly grew by 1.7% for the first quarter year-on-year (despite COVID impacts) – Verizon attributed this to its tiered approach to Unlimited plans.

There were negative net postpay additions in the March quarter, partly ascribed to seasonality, however this followed fourth quarter criticism of Verizon by investors for failing to attract expected numbers of new customers, particularly in comparison to competitors.

In his fourth quarter address, Mr Vestberg also expressed satisfaction that Verizon was adding new enterprise customers, which it continued to do in quarter one 2021. With regard to 5G mobile edge compute, Mr Vestberg reported that Verizon was building a “funnel of customers” but held that significant revenues were only expected in 2022.

The risk of being an early mover (which had worked for Verizon with 4G LTE), may not be paying off in the 5G era. While Verizon has retained its 4G market leadership status, Verizon’s 5G market position is being challenged following the merger of Sprint and T-Mobile, which was approved in April 2020.

Prior to the merger, T-Mobile had been rolling out a low-band 5G network – which performed well on coverage, but less so on performance – where Verizon had a competitive advantage. The Sprint merger has since provided T-Mobile with a mid-band 5G network that delivers faster speeds than its previous low-band 5G network and provides better coverage than Verizon’s premium mmWave offering. T-Mobile’s 5G proposition has become more compelling from a performance perspective, and it has better 5G coverage than Verizon’s 5G UWB and NW.T-Mobile reported that it had greater than 10 million 5G subscribers in March 2021 , compared to Verizon’s 12.6 million, based on the 5G adoption rate announced for the same quarter. On this basis, and the fact that T-Mobile net additions have exceeded those of Verizon, while Verizon currently retains 5G leadership, its lead could be narrowing. 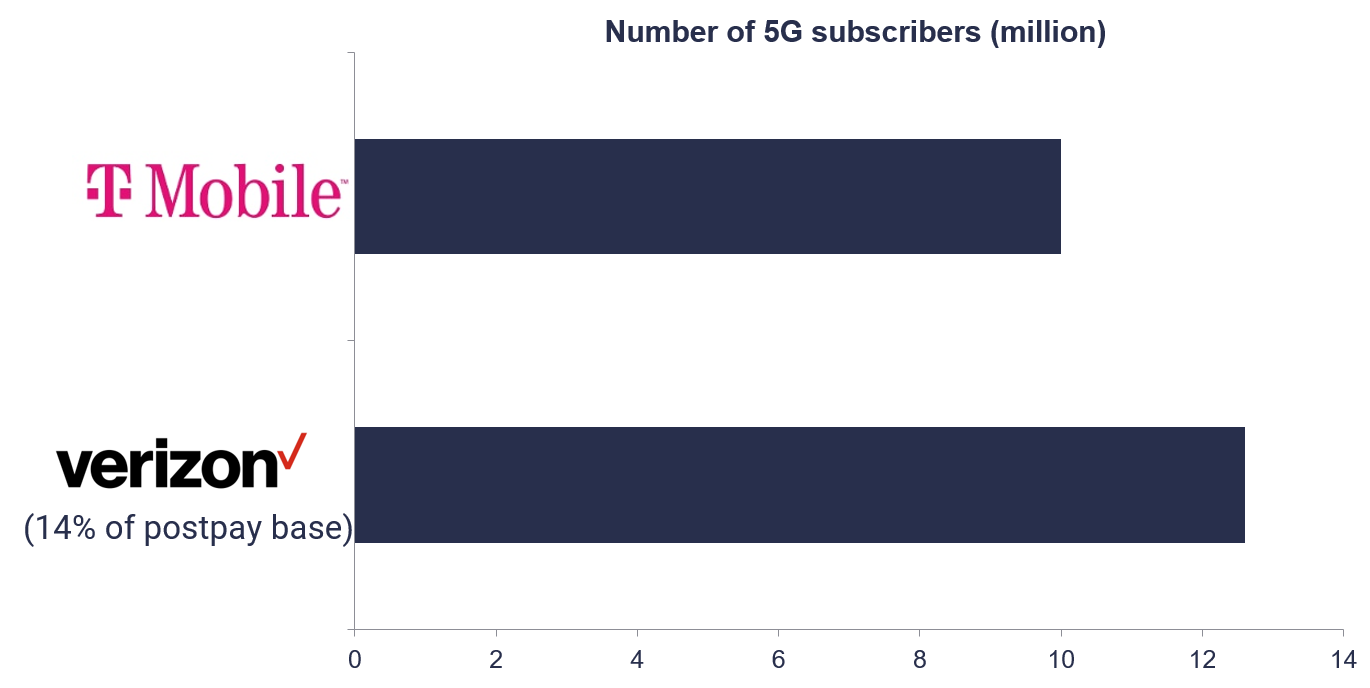 Source: STL Partners, based on T-Mobile and Verizon reported data

T-Mobile, Verizon and AT&T continue to compete aggressively on network coverage. In March 2021 , it was reported that: