The US operator is an enthusiastic proponent and strong early backer of 5G. Why, what does it know that is different from the norm and what should other telcos do about it?

Verizon is deploying 5G as quickly as it practically can, already planning to have over 1,000 base stations by the end of 2018. CEO Lowell McAdam told investors he wants to quickly reach 30 million homes, while Goldman Sachs estimated Verizon planned to spend US$20 billion for this initial phase to 2021/22 – although there is no publicised schedule. Verizon’s investments include the acquisition of XO Communications for US$1.8 billion, which has fibre in 45 of the 50 largest cities, which Verizon sees as vital infrastructure for its 5G build.

The base stations will support mobile 5G as soon as the handsets are ready. Leading mobile chip vendor Qualcomm expects a limited number of mobile phone chips to be available by the end of 2018. Sufficient chips for phones in volume are expected by mid-year 2019.[1] Taiwan’s MediaTek, the number two 4G chipmaker, says it will “hit the 5G chip market with a bang in 2019”.[2]

Verizon is building a state-of-the-art network in 800MHz of spectrum at 28GHz using existing towers and new small cells, delivering a peak speed of 10 gigabits per second or lower. A consumer in a good location should get a true gigabit in both directions, with mobile network latency of between 5 ms and 20 ms.[3]

This will probably be the largest fast 5G network built before the next decade. The Chinese operators will mostly be using frequencies below 6GHz, which will be 65% to 85% slower.

In two-thirds of the US, Verizon sells wireless but is not the incumbent wireline carrier. With limited unbundling at present, it cannot offer a landline (or equivalent) service to over 70 million of its wireless customers. It therefore cannot offer quadruple play for higher revenue, lower churn and better margins.

Yet in half the US, there is only one choice for decent broadband: the cable company. Over half of US cable has been upgraded to gigabit download speeds, and over three-quarters of the country will be offered gigabit cable by the end of 2019.[4] Faster speeds contributed to the 2.7 million broadband subscriptions cable added in 2017.

Figure 1: Cable is dominating US broadband 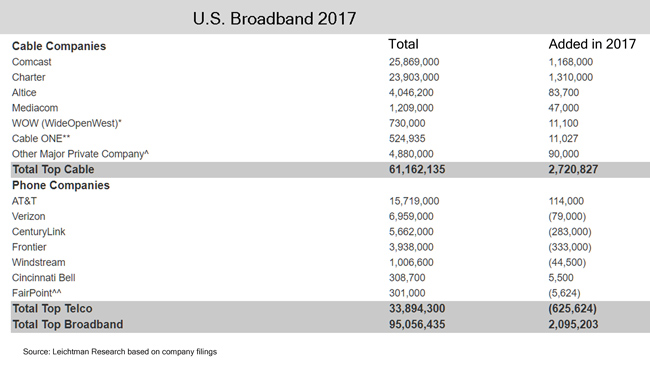 McAdam expects to quickly win 10– 20% of the new market Verizon can address. Dean Bubley notes it is very difficult to persuade reasonably happy customers to switch, but cable service in the US is notoriously bad. Verizon’s long-term goal is 40– 50%, consistent with its results where it has FIOS fibre to the home. CFO Matt Ellis believes, “When you look at other cities outside of the ILEC footprint, offering consumer services using 5G is, we think, going to have a lot of upside for the company.”[5]

[3] End-to-end latency for a user will depend on how far their data request needs to go into the network and the Internet. If the signal has to go from one side of the US to the other it will take longer than a locally or edge hosted service.