Facing lockout from a growing chunk of the Internet and mounting competition from the Facebook-Microsoft alliance and Amazon, Google’s core business is under intense pressure. The search giant’s response is to innovate, offering consumers proactive recommendations, as well as reactive search results. Once an interesting sideline, Google Now has become fundamental to the Mountain View company’s future. Is the suggestion service good enough to maintain Google’s position as the world’s leading big data company?

The challenges to Google’s core business

Although Google is the world’s leading search engine by some distance, its pre-eminence is more fragile than its first appears. As Google likes to remind anti-trust authorities, its competitors are just a click away. And its primary competitors are some of the most powerful and well-financed companies in the world – Apple, Amazon, Facebook and Microsoft. As these companies, as well as specialist service providers, accumulate more and more data on consumers, Google’s position as the leading broker of online advertising is under threat in several, inter-related, ways:

Google, the company that facilitated massive deflation across advertising, content, e-commerce, and mobile operating systems, is itself suffering from the deflationary environment of the Internet. Although revenue and net income are still growing, margins are shrinking (see Figure 2). Google is still growing because it is adding volume. However, there is strong evidence that its pricing power is being eroded. 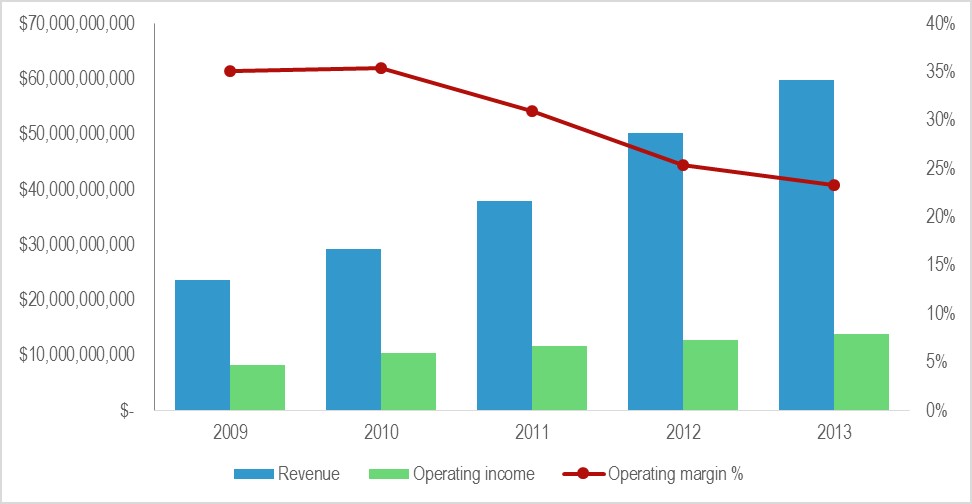 To put this in the context of its Silicon Valley peers, Figure 3 shows the same data for Google, Facebook, and Apple using a trend line covering the 2009 to 2013 period for each company. Note, that we have used a log scale to compare three companies of very different size. Apple saw growth in both revenue and operating margins until 2013, when it hit a difficult patch, although a big product launch might fix that at any time. Facebook has grown revenues enormously, but went through a traumatic 2012 as the shift to mobile hit it. While all this drama went on, Google has grown steadily, while seeing its margins eroded.

Figure 3: Google’s operating margins are now below those of Apple and Facebook

What are the factors behind Google’s declining operating margin? We believe the main drivers are:

As Figure 4 shows, Google continues to drive ad volume (paid clicks), but ad rates (cost per click) are falling steadily. The average cost-per-click on Google websites and Google Network Members’ websites decreased approximately 8% from 2012 to 2013.  We think this is primarily due to intensifying competition, particularly from Facebook. However, Google attributes the decline to “various factors, such as the introduction of new products as well as changes in property mix, platform mix and geographical mix, and the general strengthening of the U.S. dollar compared to certain foreign currencies.” The second quarter of 2014 saw paid clicks rise 2% quarter-on-quarter, while the cost per click was flat.

Figure 4: The cost per click is declining in lockstep with rising volume 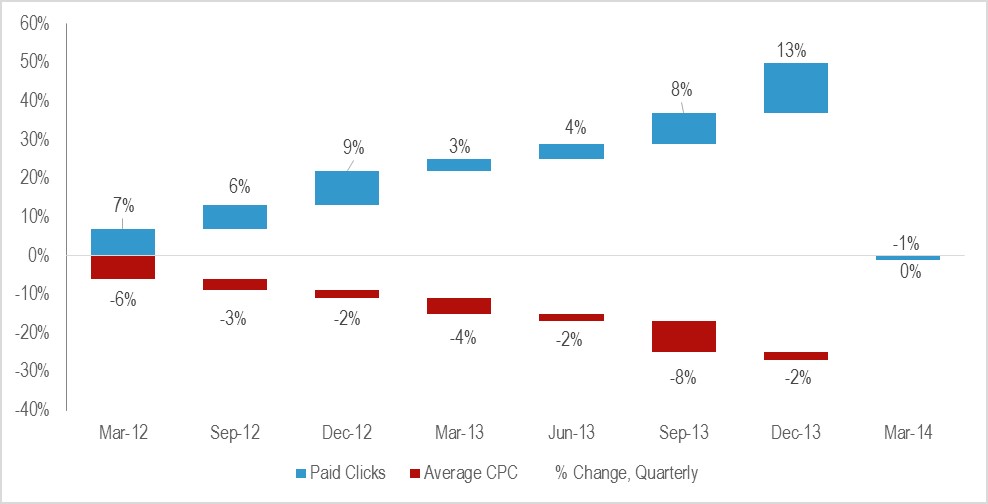