Telcos and the major Internet platforms increasingly rely on each other. What kinds of agreements should operators enter into with Amazon, Apple, Facebook and Google and what should they avoid? And what are the strategic implications of supporting players who habitually use their powerful brands and software expertise to disrupt entire industries?

Across much of the world, the competing Internet ecosystems led by Amazon, Apple, Facebook and Google have come to dominate the consumer market for digital services. Even though most telcos continue to compete with these players in the service layer, it is now almost a necessity for operators to partner with one or more of these ecosystems in some shape or form.

This report begins by pinpointing the areas where telcos are most likely to partner with these players, drawing on examples as appropriate. In each case, it considers the nature of the partnership and the resulting value to the telco and to the Internet ecosystem. It also considers the longer-term, strategic implications of these partnerships and makes recommendations on how telcos can try to strengthen their negotiating position.

This research builds on the findings of the Digital Partnerships Benchmarking Study conducted between 26th September and 4th November 2016 by STL Partners and sponsored by AsiaInfo. That study involved a survey of 34 operators in Europe and Asia Pacific. It revealed that whereas almost all operators expected to grow their partnerships business in the future, they differed on how they expected to pursue this growth.

Approximately half (46%) of the operator respondents wanted to scale up and partner with a large number of digital players, while the other half (49%) wanted to focus in on a few strategic partnerships.  Those looking to partner with a large number of companies were primarily interested in generating new revenue streams or increasing customer relevance, while many of those who wanted to focus on a small number of partnerships also regarded increasing revenues from the core business as a main objective (see Figure 1). 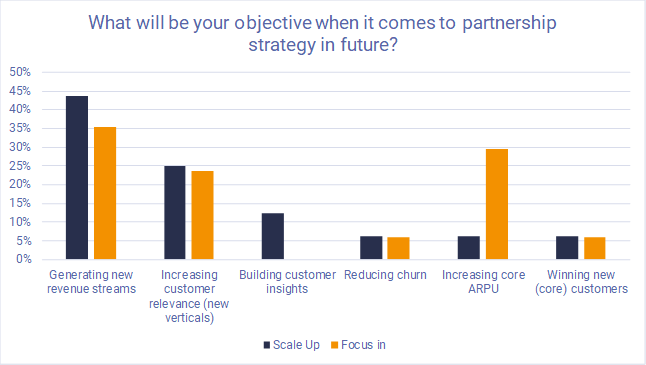 Respondents were also asked to rank the assets that an operator can bring to a partnership, both today and in the future. These ranks were converted into a normalized score (see Figure 2): A score of 100% in Figure 2 would indicate that all respondents placed that option in the top rank.

Figure 2: Operators regard their customer base as their biggest asset

Clearly, operators are aware that the size of their customer base is a significant asset, and they are optimistic that it is likely to remain so: it is overall the highest scoring asset both today and in the future.

In the future, the options around customer data (customer profiling, analytics and insights) are given higher scores (they move up the ranks). This suggests that operators believe that they will become better at exploiting their data-centric assets and – most significantly – that they will be able to monetize this in partnerships, and that these data-centric assets will have significant value.

The findings of the study confirm that most telcos believe they can bring significant and valuable assets to partnerships. This report considers how those assets can be used to strike mutually beneficial deals with the major Internet ecosystems. The next chapter explains why telcos and the leading Internet players need to co-operate with each other, despite their competition for consumers’ attention.