We see five major trends leading towards the overall picture of the ‘software defined operator’ – an operator whose boundaries and structure can be set and controlled through software. This presents threats as well as opportunities for industry players selling and wanting to sell to telcos.

At this year’s Mobile World Congress, the GSMA’s eccentric decision to split the event between the Fira Gran Via (the “new Fira”, as everyone refers to it) and the Fira Montjuic (the “old Fira”, as everyone refers to it) was a better one than it looked. If you took the special MWC shuttle bus from the main event over to the developer track at the old Fira, you crossed a culture gap that is widening, not closing. The very fact that the developers were accommodated separately hints at this, but it was the content of the sessions that brought it home. At the main site, it was impressive and forward-thinking to say you had an app, and a big deal to launch a new Web site; at the developer track, presenters would start up a Web service during their own talk to demonstrate their point.

There has always been a cultural rift between the “netheads” and the “bellheads”, of which this is just the latest manifestation. But the content of the main event tended to suggest that this is an increasingly serious problem. Everywhere, we saw evidence that core telecoms infrastructure is becoming software. Major operators are moving towards this now. For example, AT&T used the event to announce that it had signed up Software Defined Networks (SDN) specialists Tail-F and Metaswitch Networks for its next round of upgrades, while Deutsche Telekom’s Terastream architecture is built on it.

This is not just about the overused three letter acronyms like “SDN and NFV” (Network Function Virtualisation – see our whitepaper on the subject here), nor about the duelling standards groups like OpenFlow, OpenDaylight etc., with their tendency to use the word “open” all the more the less open they actually are. It is a deeper transformation that will affect the device, the core network, the radio access network (RAN), the Operations Support Systems (OSS), the data centres, and the ownership structure of the industry. It will change the products we sell, the processes by which we deliver them, and the skills we require.

In the future, operators will be divided into providers of the platform for software-defined network services and consumers of the platform. Platform consumers, which will include MVNOs, operators, enterprises, SMBs, and perhaps even individual power users, will expect a degree of fine-grained control over network resources that amounts to specifying your own mobile network. Rather than trying to make a unitary public network provide all the potential options as network services, we should look at how we can provide the impression of one network per customer, just as virtualisation gives the impression of one computer per user.

To summarise, it is no longer enough to boast that your network can give the customer an API. Future operators should be able to provision a virtual network through the API. AT&T, for example, aims to provide a “user-defined network cloud”.

Elements of the Software-Defined Future

We see five major trends leading towards the overall picture of the ‘software defined operator’ – an operator whose boundaries and structure can be set and controlled through software.

Because core network functions like the Mobile Switching Centre (MSC) and Home Subscriber Server (HSS) can now be implemented in software on commodity hardware, they no longer have to be tied to major vendors’ equipment deployed in centralised facilities. This frees them to migrate towards the edge of the network, providing for more efficient use of transmission links, lower latency, and putting more features under the control of the customer.

Network architecture diagrams often show a boundary between “the Internet” and an “other network”. This is called the ‘Gi interface’ in 3G and 4G networks. Today, the “other network” is usually itself an IP-based network, making this distinction simply that between a carrier’s private network and the Internet core. Moving network functions forwards towards the edge also moves this boundary forwards, making it possible for Internet services like content-delivery networking or applications acceleration to advance closer to the user.

Increasingly, the network edge is a node supporting multiple software applications, some of which will be operated by the carrier, some by third-party services like – say – Akamai, and some by the carrier’s customers.

2: Access network functions get deployed further and further back

A parallel development to the emergence of integrated small cells/servers is the virtualisation and centralisation of functions traditionally found at the edge of the network. One example is so-called Cloud RAN or C-RAN technology in the mobile context, where the radio basebands are implemented as software and deployed as virtual machines running on a server somewhere convenient. This requires high capacity, low latency connectivity from this site to the antennas – typically fibre – and this is now being termed “fronthaul” by analogy to backhaul.

Another example is the virtualised Optical Line Terminal (OLT) some vendors offer in the context of fixed Fibre to the home (FTTH) deployments. In these, the network element that terminates the line from the user’s premises has been converted into software and centralised as a group of virtual machines. Still another would be the increasingly common “virtual Set Top Box (STB)” in cable networks, where the TV functions (electronic programming guide, stop/rewind/restart, time-shifting) associated with the STB are actually provided remotely by the network.

In this case, the degree of virtualisation, centralisation, and multiplexing can be very high, as latency and synchronisation are less of a problem. The functions could actually move all the way out of the operator network, off to a public cloud like Amazon EC2 – this is in fact how Netflix does it.

3: Some business support and applications functions are moving right out of the network entirely

If Netflix can deliver the world’s premier TV/video STB experience out of Amazon EC2, there is surely a strong case to look again at which applications should be delivered on-premises, in the private cloud, or moved into a public cloud. As explained later in this note, the distinctions between on-premises, forward-deployed, private cloud, and public cloud are themselves being eroded. At the strategic level, we anticipate pressure for more outsourcing and more hosted services.

4: Routers and switches are software, too

In the core of the network, the routers that link all this stuff together are also turning into software. This is the domain of true SDN – basically, the effort to substitute relatively smart routers with much cheaper switches whose forwarding rules are generated in software by a much smarter controller node. This is well reported elsewhere, but it is necessary to take note of it. In the mobile context, we also see this in the increasing prevalence of virtualised solutions for the LTE Enhanced Packet Core (EPC), Mobility Management Entity (MME), etc.

5: Wherever it is, software increasingly looks like the cloud

Virtualisation – the approach of configuring groups of computers to work like one big ‘virtual computer’ – is a key trend. Even when, as with the network devices, software is running on a dedicated machine, it will be increasingly found running in its own virtual machine. This helps with management and security, and most of all, with resource sharing and scalability. For example, the virtual baseband might have VMs for each of 2G, 3G, and 4G. If the capacity requirements are small, many different sites might share a physical machine. If large, one site might be running on several machines.

This has important implications, because it also makes sharing among users easier. Those users could be different functions, or different cell sites, but they could also be customers or other operators. It is no accident that NEC’s first virtualised product, announced at MWC, is a complete MVNO solution. It has never been as easy to provide more of your carrier needs yourself, and it will only get easier.

Figure 1: An architecture overview for a software-defined operator 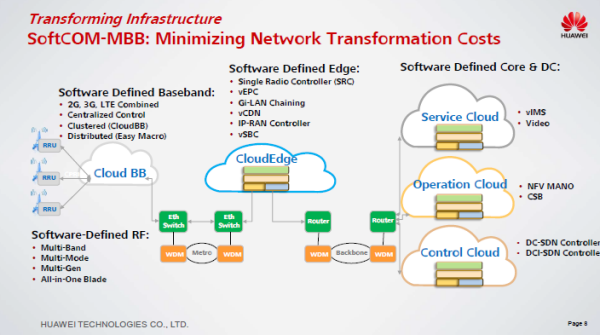