Baidu, China’s answer to Google, is one of the world’s leading Internet companies by market capitalisation. But can Baidu break out of the Middle Kingdom? Fast-growing smartphone maker, Xiaomi, is building a multi-faceted ecosystem and a tribal brand among young people. What impact will Xiaomi have in Western Europe and North America? DJI, the world's leading drone manufacturer, could become an anchor for a major ecosystem in the consumer robotics arena. But several obstacles may knock DJI off course.

The latest report in STL’s new Dealing with Disruption in Communications, Content and Commerce stream, this executive briefing analyses China’s leading digital disruptors and their likely impact outside their home country. The report explores whether the global leaders in digital commerce – Amazon, Apple, Facebook and Google – might soon face a serious challenge from a company built in China.

In our previous report, Alibaba & Tencent: China’s Digital Disruptors, we analysed China’s two largest digital ecosystems – Alibaba, which shares many similarities with Amazon, and Tencent, which is somewhat similar to Facebook. It explored the intensifying arms race between these two groups in China, their international ambitions and the support they might need from telcos and other digital players.

This executive briefing covers Baidu, China’s answer to Google and the anchor for a third digital ecosystem, and the fast-growing smartphone maker, Xiaomi, which has the potential to build a fourth major ecosystem. It also takes a close look at DJI, the world-leading drone manufacturer, which is well worth watching for its mid-to-long term potential to create another major ecosystem around consumer robotics.

Alibaba, Tencent and Baidu, which run China’s leading digital ecosystems, have all developed in a digital economy that has been partially protected by cultural and linguistic characteristics, together with government policies and regulations. As a result, Google, Facebook and Amazon haven’t been able to replicate their global dominance in China. Of the big four global disruptors, only Apple can be said to be have a major presence in China.

Thanks to their strong position in China, Alibaba, Tencent and Baidu are among the leading Internet companies globally, as measured by market capitalisation (see Figure 2). As China’s economy slows (although it will still grow about 7% this year, according to government figures), many of China’s digital players are putting more focus on international growth. Alibaba & Tencent: China’s Digital Disruptors of this report outlined how Alibaba is gaining traction in other major middle income countries, notably Russia, whereas Tencent is trying, with limited success, to expand outside of China

Figure 2:  China is home to four of the world’s most valuable publicly-listed Internet companies 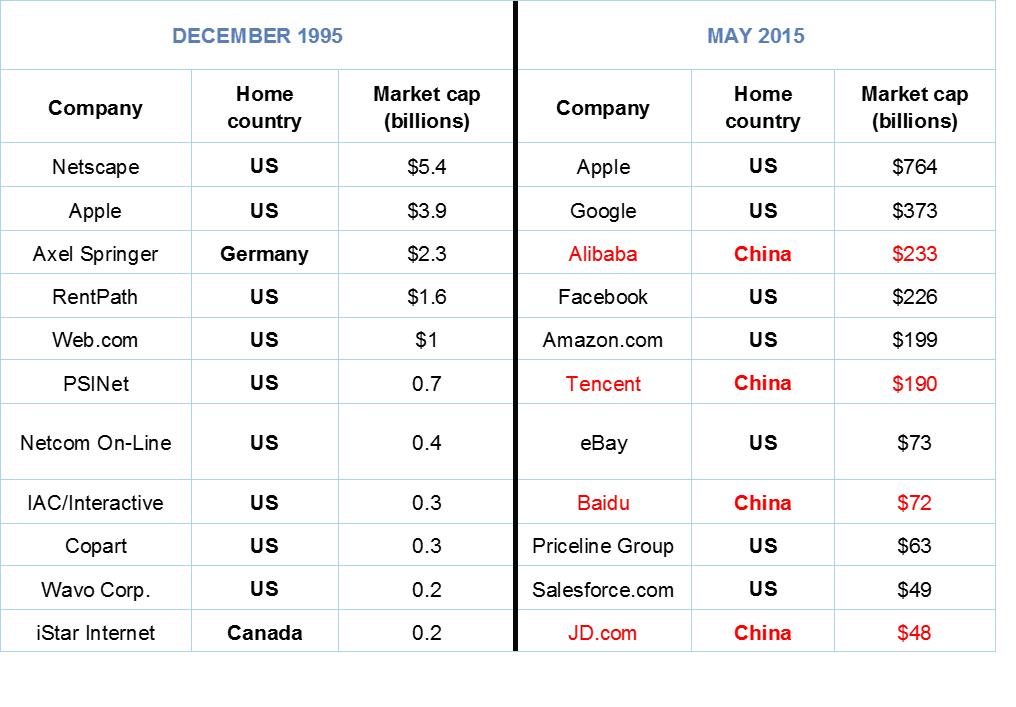 Of the five companies covered in the two parts of this report, search specialist Baidu is the least international – its revenues are almost all generated in China and its services aren’t much used outside its home country. Innovative and fast growing handset maker Xiaomi is still heavily dependent on China, but is seeing strong sales in other developing markets. The most international of the three is DJI, the world’s leading drone maker, which is making major inroads into the U.S. and Western Europe – the heartland of Apple, Google, Amazon and Facebook.

As discussed in Alibaba & Tencent: China’s Digital Disruptors, international telcos, media companies and banks all have a strategic interest in encouraging more digital competition globally. Today, the big four U.S.-based disruptors dominate the digital economy in North America, Western Europe, Latin America and much of the developing world, limiting the mindshare and market share available to other players.

Many telcos are particularly concerned about Apple’s and Facebook’s ever-strengthening position in digital communications – a core telecoms service. They also fret about Google’s and Amazon’s power in digital commerce and content. On the basis that my enemy’s enemy is my friend, telcos might want to support Xiaomi’s challenge to Apple, while backing Tencent’s efforts to make messaging app WeChat an international service and Alibaba’s growing rivalry with Amazon (both aspects are covered in the previous report).