It also explores how improvements in digital technologies, consumer electronics and bandwidth are changing the online entertainment market, while explaining the ongoing uncertainty around net neutrality. The report then considers how well each of the five major entertainment platforms is prepared for the likely technological and regulatory changes in this market. Finally, it provides a high level overview of the implications for telco, paving the way for a forthcoming STL Partners report going into more detail about potential strategies for telcos in online entertainment.

The rise and rise of online entertainment

As in many other sectors, digital technologies are shaking up the global entertainment industry, giving rise to a new world order. Now that 3.2 billion people around the world have Internet access, according to the ITU, entertainment is increasingly delivered online and on-demand.

Two leading distributors of online content – Google and Facebook – have infiltrated the top ten media owners in the world as defined by ZenithOptimedia (see Figure 1). ZenithOptimedia ranks media companies according to all the revenues they derive from businesses that support advertising – television broadcasting, newspaper publishing, Internet search, social media, and so on. As well as advertising revenues, it includes all revenues generated by these businesses, such as circulation revenues for newspapers or magazines. However, for pay-TV providers, only revenues from content in which the company sells advertising are included. 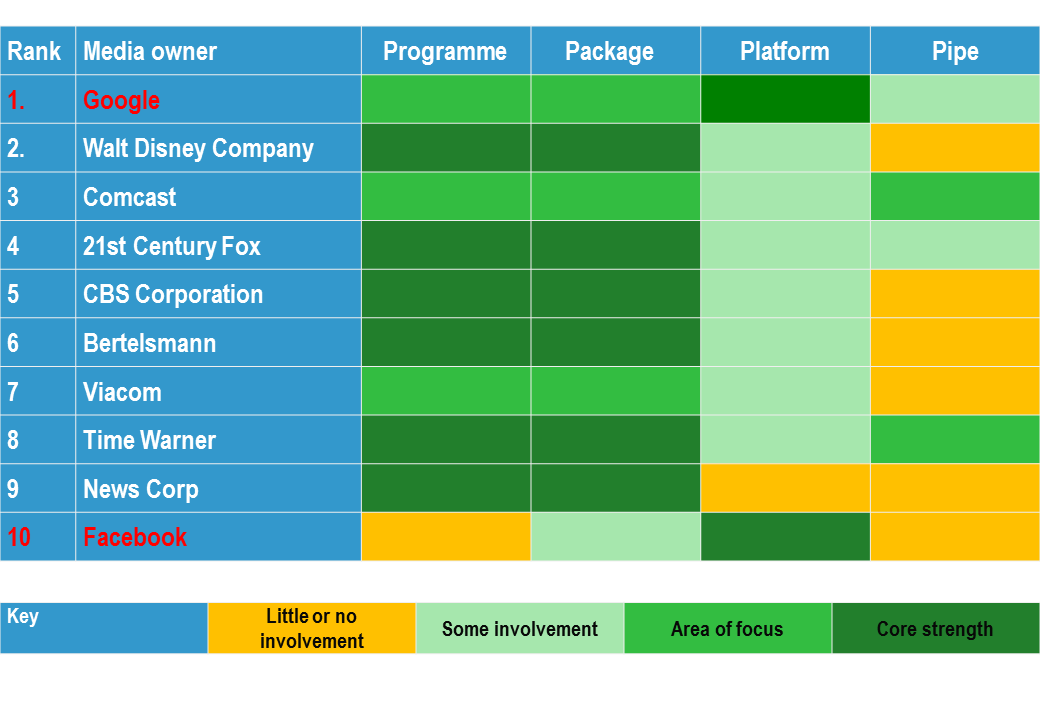 ZenithOptimedia says this approach provides a clear picture of the size and negotiating power of the biggest global media owners that advertisers and agencies have to deal with. Note, Figure 1 draws on data from the financial year 2013, which is the latest year for which ZenithOptimedia had consistent revenue figures from all of the publicly listed companies. Facebook, which is growing fast, will almost certainly have climbed up the table since then.

Figure 1 also shows STL Partners’ view of the extent to which each of the top ten media owners is involved in the four key roles in the online content value chain. These four key roles are:

Most of the world’s top ten media owners have traditionally focused on programming and packaging, but the rise of the Internet with its global reach has brought unprecedented economies of scale and scope to the platform players, enabling Google and now Facebook to break into the top ten. These digital disruptors earn advertising revenues by providing expansive two-sided platforms that link creators with viewers. However, intensifying competition from other major ecosystems, such as Amazon, and specialists, such as Netflix, is prompting Google, in particular, to seek new sources of differentiation. The search giant is increasingly investing in creating and packaging its own content.  The need to support an expanding range of digital devices and multiple distribution networks is also blurring the boundaries between the packaging and platform roles (see Figure 2, below) – platforms increasingly need to package content in different ways for different devices and for different devices.

Figure 2 – How the key roles in online content are changing 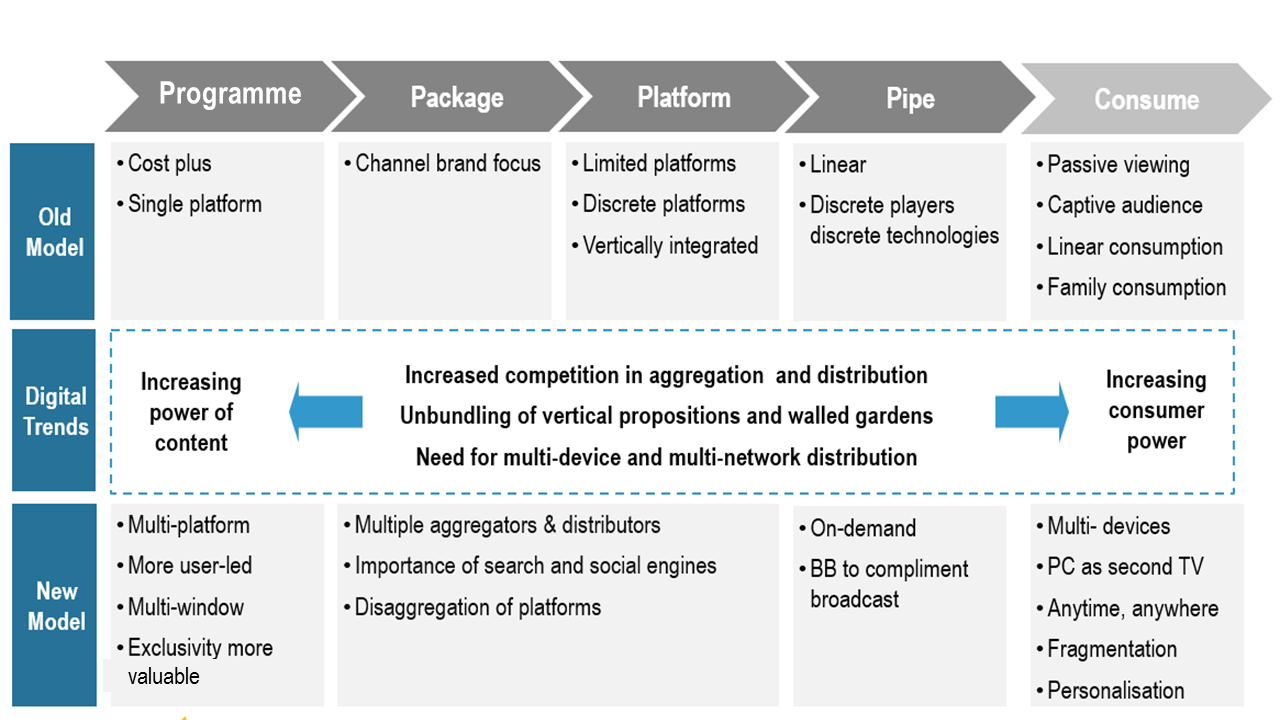 These forces are prompting most of the major media groups, including Google and, to a lesser extent, Facebook, to expand across the value chain. Some of the largest telcos, including Verizon and BT, are also investing heavily in programming and packaging, as they seek to fend off competition from vertically-integrated media groups, such as Comcast and Sky (part of 21st Century Fox), who are selling broadband connectivity, as well as content.

In summary, the strongest media groups will increasingly create their own exclusive programming, package it for different devices and sell it through expansive distribution platforms that also re-sell third party content. These three elements feed of each other – the behavioural data captured by the platform can be used to improve the programming and packaging, creating a virtuous circle that attracts more customers and advertisers, generating economies of scale.

Although some leading media groups also own pipes, providing connectivity is less strategically important – consumers are increasingly happy to source their entertainment from over-the-top propositions. Instead of investing in networks, the leading media and Internet groups lobby regulators and run public relations campaigns to ensure telcos and cablecos don’t discriminate against over-the-top services. As long as these pipes are delivering adequate bandwidth and are sufficiently responsive, there is little need for the major media groups to become pipes.

The flip-side of this is that if telcos can convince the regulator and the media owners that there is a consumer and business benefit to differentiated network services (or discrimination to use the pejorative term), then the value of the pipe role increases. Guaranteed bandwidth or low-latency are a couple of the potential areas that telcos could potentially pursue here but they will need to do a significantly better job in lobbying the regulator and in marketing the benefits to consumers and the content owner/distributor if this strategy is to be successful.

To be sure, Google has deployed some fibre networks in the US and is now acting as an MVNO, reselling airtime on mobile networks in the US. But these efforts are part of its public relations effort – they are primarily designed to showcase what is possible and put pressure on telcos to improve connectivity rather than mount a serious competitive challenge.