Mobile messaging is fast becoming a key platform for digital commerce, mounting a challenge to Google Search, Amazon’s Marketplace and other two-sided platforms. As Facebook gears up to take advantage of this opportunity, some of the world’s largest telcos are working with Google to develop and deploy multimedia communications services that will work across networks and will replace SMS. But will it be too little, too late?

The strategic importance of digital communications services is rising fast, as these services now look set to become a major conduit for digital commerce. Messaging services are increasingly enabling interactions and transactions between consumers and businesses. Largely pioneered by WeChat in China, the growing integration of digital communications and commerce services looks like a multi-billion dollar boon for Facebook and a major headache for Amazon, eBay and Google, as outlined in the recent STL Partners report: WeChat: A Roadmap for Facebook and Telcos in Conversational Commerce.

This report analyses Google’s and telcos’ strategic position in the digital communications market, before exploring the recent agreement between leading telcos, the GSMA and Google to use the Android operating system to distribute RCS (Rich Communications Service), which is designed to be a successor to SMS and MMS. Like SMS, RCS is intended to work across networks, be network-based and be the default mobile messaging service, but it also goes far beyond SMS, by supporting rich features, such as video calling, location sharing, group chat and file sharing.

The report then undertakes a SWOT (strengths, weaknesses, opportunities and threats) analysis on the new Google supported RCS proposition, before considering what telcos need to do next to give the service any chance of seeing widespread adoption.

To Google’s alarm, mobile messaging looks set to become the next major digital commerce platform. In some ways, this is a logical progression of what has come before. Although neither Google nor Amazon, two of the leading digital commerce incumbents, seem well prepared for the rise of “conversational commerce”, communications and commerce have always been interwoven – physical marketplaces, for example, serve both functions. In the digital era, new communications services, such as SMS, email and mobile calls, were quickly adopted by companies looking to contact consumers. Even now, businesses continue to rely very heavily on email to communicate with consumers, and with each other, and through Gmail, Google has a strong position in this segment.

But many consumers, particularly younger people, now prefer to use mobile messaging and social networking services to communicate with friends and family and are using email, which was developed in the PC era, less and less. People are spending more and more time on messaging apps – some industry executives estimate that consumers spend 40% of their time on a mobile phone purely in a messaging app. Understandably, businesses are looking to follow consumers on to mobile messaging and social networking services. Crucially, some of these services are now enabling businesses to transact, as well as interact, with customers, cutting the likes of Amazon and Google out of the loop entirely.

Largely pioneered by Tencent’s WeChat/Weixin service in China, the growing integration of digital communications and commerce services could be a multi-billion dollar boon for Facebook, the leading provider of digital messaging services in much of the world. The proportion of WeChat users making purchases through the service leapt to 31% in 2016 up from 15% in 2015, according to Mary Meeker’s Global Internet Trends report 2016. Moreover, users of WeChat’s payment service now make more than 50 payments a month through the service (see Figure 1), highlighting the convenience of ordering everyday products and services through a messaging app. In March 2016, Tencent reported the combined monthly active users of the Weixin and WeChat messaging services reached 697 million at the end of 2015, representing annual growth of 39%. See WeChat: A Roadmap for Facebook and Telcos in Conversational Commerce for more on this key trend in the digital economy. 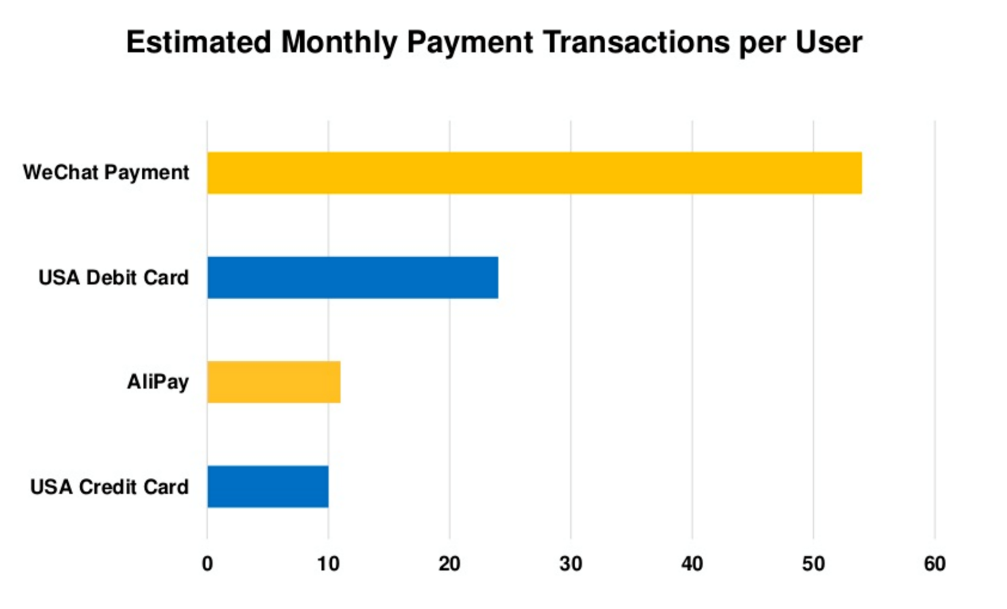