Telcos are well placed to enable the healthcare sector to meet the rising demand for secure and reliable in-home monitoring and treatment for the elderly and infirm.

The world has been talking about connected healthcare – the use of in-home and wearable systems to monitor people’s condition – for a long time. Although adoption to date has been piecemeal and limited, the rapid rise in the number of elderly people is fuelling demand for in-home and wearable monitoring systems. The rapid spread of the Covid-19 virus is putting the world’s healthcare systems under huge strain, further underlining the need to reform the way in which many medical conditions are diagnosed and treated.

This report explores whether telcos now have the appetite and the tools they need to serve this very challenging, but potentially rewarding market. With the advent of the Coordination Age (see STL Partners report: Telco 2030: New purpose, strategy and business models for the Coordination Age), telcos could play a pivotal role in enabling the world’s healthcare systems to become more sustainable and effective.

This report considers demographic trends, the forces changing healthcare and the case for greater use of digital technologies to monitor chronic conditions and elderly people. It explores various implementation options and some of the healthcare-related activities of Tele2, Vodafone, Telefónica and AT&T, before drawing conclusions and recommending some high-level actions for telcos looking to support healthcare for the elderly.

This executive briefing builds on previous STL Partners reports including:

Why healthcare needs to change

During the twentieth century, life expectancy in most countries in the world rose dramatically.  This was down to advances in medical science and diagnostic technology, as well as rising awareness about personal and environmental hygiene, health, nutrition, and education. Average global life expectancy continues to rise, increasing from 65.3 years in 1990 to 71.5 years in 2013.  In some countries, the increase in lifespans has been dramatic. The life expectancy for a Chilean female has risen to 82 years today from 33 years in 1910, according to the World Health Organization (WHO).

Figure 1: Across the world, average life expectancy is rising towards 80 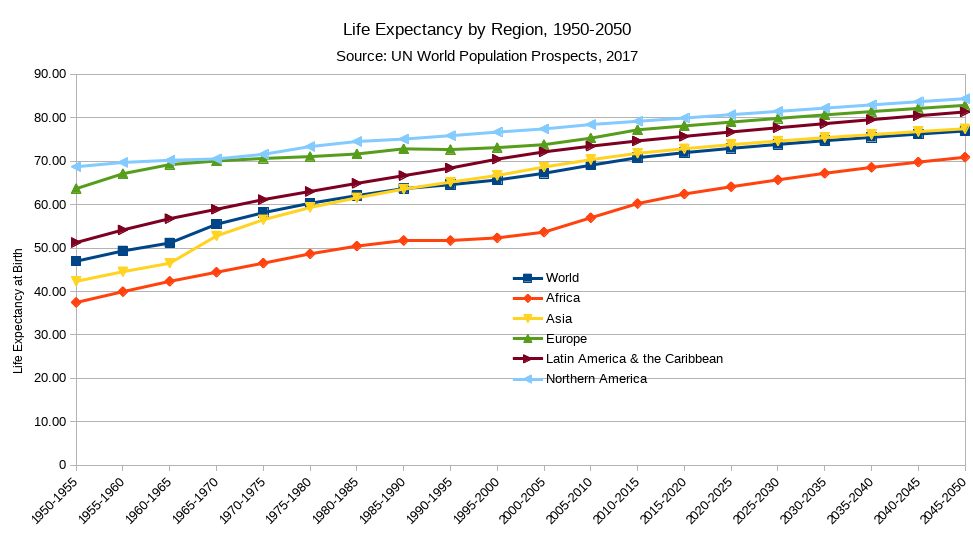 Clearly, the increase in the average lifespan is a good thing. But longer life expectancy, together with falling birth rates, means the population overall is aging rapidly, posing a major challenge for the world’s healthcare systems. According to the WHO, the proportion of the world’s population over 60 years old will double from about 11% to 22% between 2000 and 2050, equivalent to a rise in the absolute number of people over 60 from 605 million to an extraordinary two billion. Between 2012 and 2050, the number of people over 80 will almost quadruple to 395 million, according to the WHO. That represents a huge increase in the number of elderly people, many of whom will require frequent care and medical attention. For both policymakers and the healthcare industry, this demographic time bomb represents a huge challenge.

Of particular concern is the number of people that need continuous healthcare. About 15% of the world’s population suffers from various disabilities, with between 110 million and 190 million adults having significant functional difficulties, according to the WHO. With limited mobility and independence, it can be hard for these people to get the healthcare they need.

As the population ages, this number will rise and rise. For example, the number of Americans living with Alzheimer’s disease, which results in memory loss and other symptoms of dementia, is set to rise to 16 million by 2050 from five million today, according to the Alzheimer’s Association.

The growth in the number of older people, combined with an increase in sedentary lifestyles and diets high in sugars and fats, also means many more people are now living with heart disease, obesity, diabetes and asthma. Furthermore, poor air quality in many industrial and big cities is giving rise to cancer, cardiovascular and respiratory diseases such as asthma, and lung diseases. Around 235 million people are currently suffering from asthma and about 383,000 people died from asthma in 2015, according to the WHO.

Figure 2: Spending on healthcare is rising except in low income countries

However, there is a huge difference in absolute spending levels between high-income countries and the rest of the world (see Figure 3). High-income countries, such as the U.S., spend almost ten times as much per capita as upper middle-income countries, such as Brazil. At first glance, this suggests the potential healthcare market for telcos is going to be much bigger in Europe, North America and developed Asia, than for telcos in Latin America, developing Asia and sub-Saharan Africa. Yet these emerging economies could leapfrog their developed counterparts to adopt connected self-managed healthcare systems, as the only affordable alternative.

Figure 3: Absolute health spending in high income countries is far ahead of the rest

The cost associated with healthcare services continues to rise due to the increasing prices of prescription drugs, diagnostic tools and in-clinic care. According to the U.S. Centers for Disease Control and Prevention, 90% of the nation’s US$3.3 trillion annual healthcare expenditure is spent on individuals with chronic and mental health conditions.

On top of that figure, the management of chronic conditions consumes an enormous amount of informal resources. As formal paid care services are expensive, many older people rely on the support of family, friends or volunteers calling at their homes to check on them and help them with tasks, such as laundry and shopping. In short, the societal cost of managing chronic conditions is enormous.

The particular needs of the elderly

Despite the time and money being spent on healthcare, people with chronic and age-related conditions can be vulnerable. While most elderly people want to live in their own home, there are significant risks attached to this decision, particularly if they live alone. The biggest danger is a fall, which can lead to fractures and, sometimes, lethal medical complications. In the U.S., more than one in four older people fall each year due to illness or loss of balance, according to the U.S. Centers for Disease Control and Prevention. But less than half tell their doctor. One out of five falls causes a serious injury, such as broken bones or a head injury. In 2015, the total medical costs for falls was more than US$50 billion in the U.S. Beyond falls, another key risk is that older people neglect their own health. A 2016 survey of 1,000 U.K. consumers by IT solutions company Plextek, found that 42% of 35- to 44-year-olds are concerned that their relatives aren’t telling them they feel ill.

Such concerns are driving demand for in-home and wearable systems that can monitor people in real-time and then relay real-time location and mobility information to relatives or carers. If they are perceived to be reliable and comprehensive, such systems can provide peace of mind, making home-based care a more palatable alternative for both patients and their families.