Mobile apps are at the heart of the modern digital economy. Although many telco-owned apps have struggled, some have broken the mould, achieving high levels of adoption and usage. How did they do it?

Part of STL Partners’ (Re)connecting with Consumers stream, this report analyses a selection of successful mobile apps run by telcos or their subsidiaries. It explains why mobile apps will continue to play a major in the digital economy for the foreseeable future before considering the factors that have made particular telco apps successful. Most of the apps considered in the report are from Asia, primarily because operators in that world have typically been more aggressive in pursuing the digital services market than their counterparts elsewhere. Note, the list of apps analysed in this report is far from exhaustive – there are other successful telco-run apps on the market.

The ultimate goal of this report is to explain how apps can engage customers and give telcos greater traction with consumers. Although many apps are rarely used and quickly discarded, the most popular apps, such as Instagram, Spotify and YouTube, have become an integral part of the daily lives of hundreds of millions of people. Some apps, such as Uber and Google Maps, regularly provide people with services and/or information that make their lives much easier – getting a taxi or navigating through an unfamiliar city is now much easier than it used to be. Indeed, a well-designed app dedicated to a specific service can deliver both relevance and revenues.

Can Netflix and Spotify make the leap to the top tier?

AI in customer services: It’s not all about chatbots

AI on the Smartphone: What telcos should do

Why apps matter for telcos

Telcos’ most successful digital services, notably SMS, pre-date the smartphone app era.  Even more recent triumphs, such as the M-Pesa, the ground breaking mobile money service in Kenya, were originally designed to work on feature phones.  Many similar services, such as MTN Money and Orange Money, aimed at the large numbers of people without bank accounts in Africa and developing Asia, continue to be accessed largely through text-based menus via SIM toolkit.

But the widespread adoption of smartphones in developed and developing markets alike mean that telcos everywhere need to ensure all the consumer services they offer can be accessed via well-designed and intuitive apps with graphical user interfaces. By the end of 2017, there were 4.3 billion smartphones in use worldwide, according to Ericsson’s estimates. Moreover, smartphone adoption continues to rise rapidly, particularly in Africa, India and other developing countries. Ericsson reckons the number of smartphone subscriptions will reach 7.2 billion in 2023 (see Figure 3).

Figure 3: The number of smartphones in use is rising steadily across the world 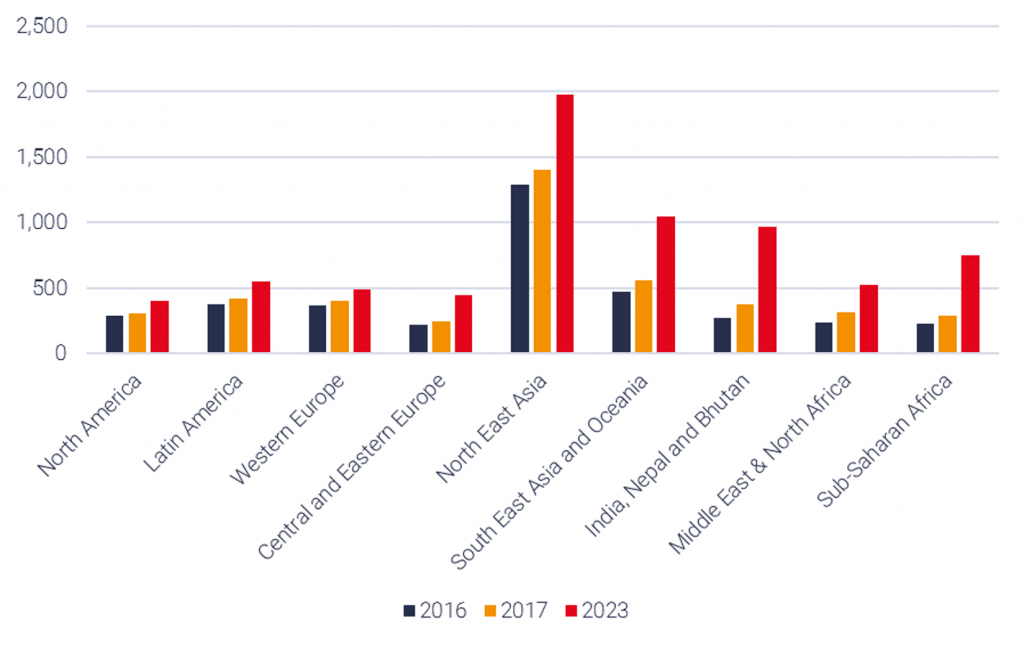 With smartphones the default handset for people in developed markets and many developing markets, apps have become a major medium for interactions between consumers and service providers across the economy. Now approximately ten years old, the so-called app economy is worth tens of billions of dollars per annum.

Although there has been a backlash, as people’s smartphones get clogged up with apps, the sector still has considerable momentum.

The most popular apps, such as Uber and Amazon Shopping, combine ease of access (straightforward authentication), with ease-of-use and ease-of-payment, enabling them to attract tens of millions of users.

With some justification, proponents contend that apps will continue to be one of the main drivers of the digital economy for the foreseeable future. The broader app economy will be worth $6.3 trillion by 2021, up from $1.3 trillion in 2016, according to App Annie. Note, those figures include in-app ads and mobile commerce, as well as the revenues generated through app stores. In other words, this is the total value of the business conducted via apps, rather than the revenue accrued by app stores and developers. This dramatic forecast assumes the ongoing shift of physical transactions to the mobile medium continues apace: App Annie expects the value of mobile commerce transactions to rise from $344 per user in 2016 to $946 by 2021.

Although most of the leading apps are free, many do generate a subscription fee or one-off sales. Annual consumer spending in app stores is set to rise 18% between 2016 and 2021 to reach $139 billion worldwide, according to specialist app analytics firm App Annie, which also forecasts the total time spent in apps will grow to 3.5 trillion hours in 2021, up from 1.6 trillion in 2016.

In reality, some of these aggressive forecasts may prove to be too bullish, as consumers begin to make greater use of messaging services and voice-activated speakers to interact with local merchants and purchase digital content and services.  Even so, it is clear that the leading mobile apps will continue to be a major consumer engagement tool for many brands and merchants well into the next decade. In some cases, such as Spotify or the fitness app Strava, the user has typically put significant effort into creating a personalised experience, helping to cement their loyalty.

In developed countries, some telcos, notably AT&T and Verizon, have belatedly and expensively acquired a major presence in the app economy by buying leading digital content producers and service providers. With the $85.4 billion acquisition of Time Warner, AT&T is now the owner of HBO Now, which was the third highest app by consumer spend in the US in 2017, according to App Annie. HBO Now also ranked fifth in Mexico and eighth in the world on this measure. Having acquired Yahoo! and AOL apps over the past few years, Verizon ranked eighth among companies in terms of downloads in the US in 2017.

The delicate transition from SIM toolkit to app

But expensive acquisitions are not the only way into the app economy. For telcos that have developed consumer services from the ground-up, the rise of the smartphone offers opportunities to provide much richer functionality and a more intuitive interface, as well cross-selling and up-selling. In Kenya, Safaricom has been expanding the mobile money transfer service M-Pesa into a much broader financial services proposition, while prodding users to switch from the SIM toolkit to the app, which can properly highlight M-Pesa’s wider proposition. At the same time, the telco has integrated M-Pesa into its customer service app, mySafaricom, helping it to promote its broader telecoms offering to frequent users of its mobile money services.

However, Safaricom is well aware that it needs to tread cautiously, continuing to cater for those customers who are comfortable with the SIM toolkit experience. Its softly-softly approach is to reassure Kenyans that they can always fall back on the SIM toolkit, if they don’t like the app.  In a Safaricom-sponsored article from August 2017, Emmanuel Chenze wrote the following on the online site, Android Kenya:

“For over a year now, Safaricom has had the mySafaricom application available on the Google Play Store for users to be able to better manage the services they receive from the telecommunications company. However, it wasn’t until March this year when the application was updated to include M-PESA.

“With M-PESA finally integrated, the over 1 million smartphone users can now take full advantage and transact even faster thanks to the app. While good ol’ SIM toolkit still works wonders and remains a good backup option when you’re not connected to the internet or when the mySafaricom app is acting up, using the application, which has since been updated to reflect Safaricom’s recent rebranding, is way better than using the otherwise cumbersome SIM toolkit.”

If they can make their apps straightforward and easily accessible, Africa’s telcos could still become major players in the app economy – as Figure 4 indicates, the number of smartphones in use in sub-Saharan Africa could double between now and 2023. That gives telcos a major opportunity to promote their apps to first-time smartphone users as they buy their new handsets. Pan-Africa operator MTN is pursuing this strategy with its MTN Game+ , Music+ and video apps (see Figure 4). 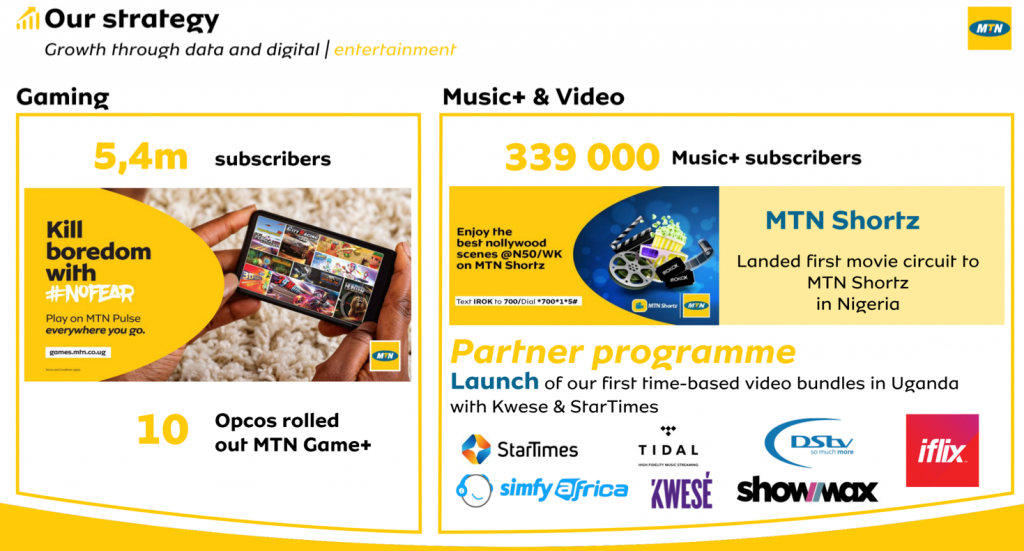 In Asia, some telcos have successfully developed widely used apps from scratch, notably in the customer care space, as explained in the next section (continued in full report).