Microsoft faces the post-monopoly era, having had to write off its $8bn adventure in mobile and cope with significant disruption across the piece. Collaboration and communications are key to its new strategy, leading to significant implications for telcos and others.

Introduction: From Monopoly to Disruption

For many years, Microsoft was an iconic monopolist, in much the same way as AT&T had been before divestment. Microsoft’s products were ubiquitous and often innovative, and its profitability enormous. It was familiar, yet frequently scorned as the creator of a dreary monoculture with atrocious security properties. Microsoft’s mission statement could not have been simpler: a computer in every office and in every home. This achieved, though, its critics have often seen it as an organisation in search of an identity, experimenting with mobile, search, maps, hardware and much else without really settling on a new direction.

Going to the numbers, for the last two years, there has been steady erosion of the once phenomenally high margins, although revenue is still steadily rising. Since Q3 2013, revenue at Microsoft grew an average of 3.5% annually, but the decline in margins meant that profits barely grew, with a CAGR of 0.66%. Telcos will be familiar with this kind of stagnation, but telcos would be delighted with Microsoft’s 66% gross margins. Note, that getting into hardware has given Microsoft a typical hardware vendor’s Christmas spike in revenue. 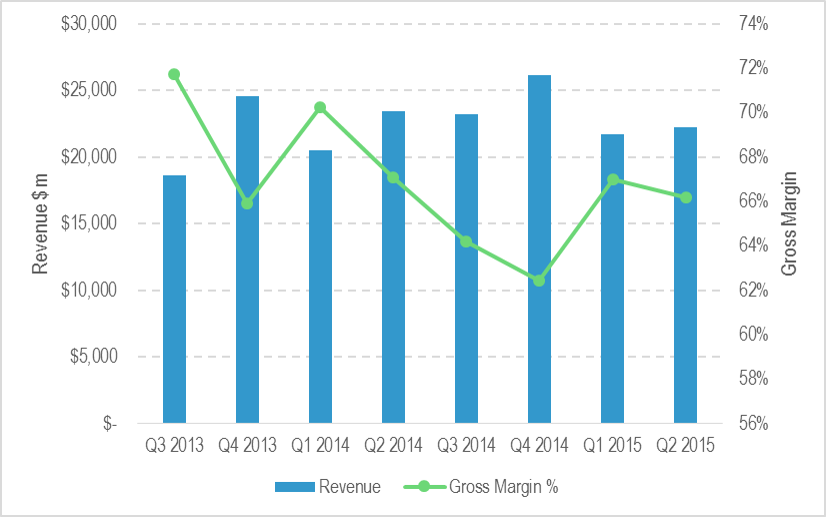 Over the long term, the pattern is clearer, as are the causes. Figure 2 shows Microsoft’s annual revenue and gross margin since the financial year 1995. From 1995 to 2010, gross margins were consistently between 80 and 90 per cent, twice the 45% target HP traditionally defined as “fascinating”. It was good to be king. However, in the financial year 2010, there is a clear inflection point: margins depart from the 80% mark and never return, falling at a 3.45% clip between 2010 and 2015.

The event that triggered this should be no surprise. Microsoft has traditionally been discussed in parentheses with Apple, and Apple’s 2010 was a significant one. It was the first year that Apple began using the A-series processors of its own design, benefiting from the acquisition of PA Semiconductor in 2008. This marked an important strategic shift at Apple from the outsourced, design- and brand-centric business to vertical integration and investment in manufacturing, a strategy associated with Tim Cook’s role as head of the supply chain. 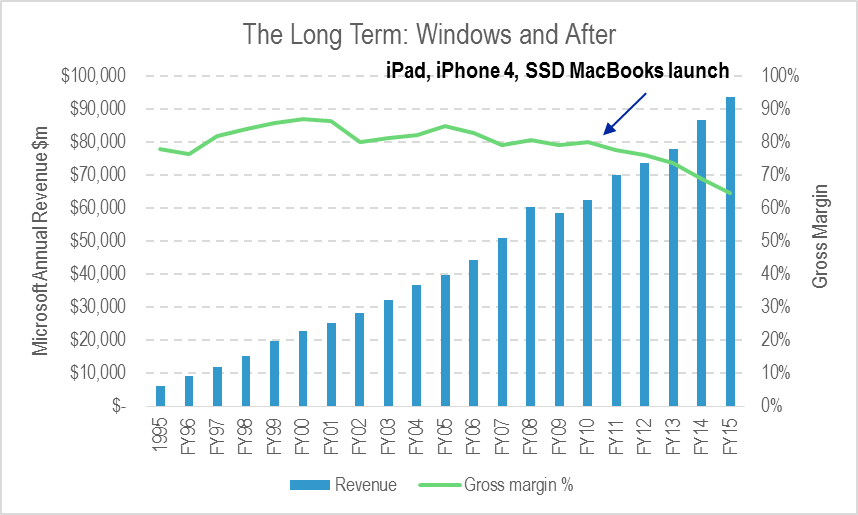 The deployment of the A4 chip made possible two major product launches in 2010 – the iPhone 4, which would sell enormously more than any of the previous iPhones, and the iPad, which created an entirely new product category competing directly with the PC. Another Apple product launch that year, which also competed head-on with Microsoft, wasn’t quite as dramatic but was also very significant – the MacBook line began shipping with SSDs rather than hard disks, and the very popular 11” MacBook Air was added as an entry-level option. At the time, the PC industry and hence Microsoft was heavily committed to the Intel-backed netbooks, and the combination of the iPad and the 11” Air essentially destroyed the netbook as a product category.

The problems started in the consumer market, but the industry was beginning to recognise that innovations had begun to take hold in consumer and then diffuse into the enterprise. Further, the enterprise franchise centred on the Microsoft Business division and what was then termed Server & Tools[1] were both threatened by the increasing adoption of Apple products.

Microsoft had to respond, and it did so with a succession of dramatic initiatives. One was to rethink Windows as a tablet- or phone-optimised operating system, in Windows Phone 7 and Windows 8. Another was to acquire Nokia’s smartphone business, and to diversify into hardware via the Xbox and Surface projects. And yet a third was to embrace the cloud. Figure 3 shows the results.