Messaging services are increasingly enabling interactions and transactions between consumers and businesses. Largely pioneered by WeChat in China, the growing integration of digital communications and commerce services looks like a multi-billion dollar boon for Facebook and a major headache for Amazon, eBay and Google. It also poses a strategic dilemma for Apple and telcos: Can they turn their communications apps into shopping channels while championing privacy and security?

The latest report in STL’s new Dealing with Disruption in Communications, Content and Commerce stream, this executive briefing explores the rise of conversational commerce – the use of messaging services to enable both interactions and transactions. It considers how WeChat/Weixin has developed this concept in China, the functionality the Tencent subsidiary offers consumers and merchants, and the lessons for other players.

The report then goes on to consider how Facebook is implementing conversational commerce in its popular Messenger app, before outlining the implications for Amazon, Google and Apple. Finally, it considers how telcos may be able to capitalise on this trend and makes a series of high-level recommendations to guide the implementation of a conversational commerce strategy. This report builds on three recent STL reports, Building Digital Trust: A Model for Telcos to Succeed in Commerce, Mobile Authentication: Telcos’ Key to the Digital World? and Authentication Mechanisms: The Digital Arms Race.

Communications and commerce: two sides of the same coin

For Facebook, advertising isn’t the only fruit. When it hired the former head of PayPal, David Marcus, to run Facebook Messenger in 2014, it was a clear signal of where the social network is heading. Facebook plans to go head to head with eBay and Amazon in the digital commerce market, generating revenues by enabling transactions, as well as brokering advertising and marketing. The ultimate goal is to transform communications services into end-to-end commerce platforms that enable consumers and brands to “close the loop” from initial interaction through transaction to after-sales care.

Facebook is not alone. In fact, it is following in the footsteps of Tencent’s WeChat service. In the STL Partners’ Wheel of Digital Commerce (see Figure 1), the remit of WeChat, Facebook Messenger, Twitter, SnapChat and other digital communications services is expanding to encompass the guide, the transact and satisfy segments (marked in blue, turquoise and green), as well as the retain, plan and promote segments: the traditional sweet spot for social networking services, email and instant messaging. 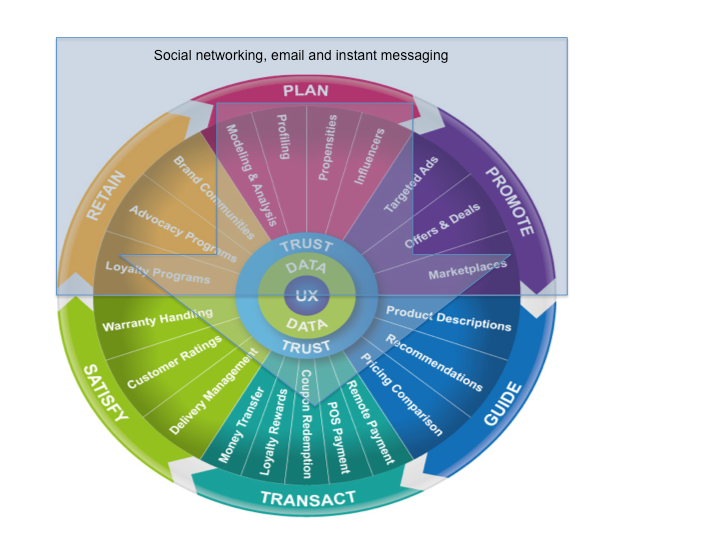 Facebook, in particular, is following in the footsteps of WeChat, Tencent’s messaging service, which is evolving into a major digital commerce platform in its home market of China. Whereas email, SMS and many other digital commerce services have long carried commercial messages, together with advertising and, inevitably, spam, WeChat goes much further – it also enables transactions and customer care. The central tenet behind this concept, which is sometimes called conversational commerce, is that consumers will become increasingly comfortable using a single service to converse with friends and businesses, and buy goods and services. In some markets, third parties are adding a commerce overlay to existing communications platforms. In India, for example, several startups, such as Joe Hukum, Niki and Lookup, are touting ways to use WhatsApp, SMS and other digital communications services to transact with consumers.

The final section of this report discusses this question further. But first, let’s consider the arguments as to why digital communications and digital commerce are natural bedfellows:

Markets – essentially a concentration of vendors in one physical location – have been a feature of most societies and cultures throughout recorded history. They fulfil two key functions: One is to enable buyers and sellers to find each other easily. The second is to enable the exchange of information, news and gossip: the communications required to help human societies to function smoothly. For many shoppers, a visit to a physical market is as much about socialising, as shopping. In other words, communications and commerce have been intertwined for centuries. Messaging apps could extend this concept into the digital age.

Communication is often a prelude for commerce. In both a personal and professional capacity, people often seek word-of-mouth recommendations or they canvas friends’ opinions on potential products and services. As consumers increasingly use communications apps for this purpose, these platforms are already playing a key role in purchasing decisions across both services and products. The obvious next step is to enable the actual transaction to also take place within the app.

People use messaging apps to organise their social lives. They chat with friends about which bars to go to, which restaurants to dine at, which films to see, which concerts to attend and other entertainment possibilities. Once the decision is made, one of the group may want to book tickets, a table or a taxi. If such a booking can be made within the messaging app, all of the group will be able to see the details and act accordingly.

After a transaction is completed, customer service kicks in. The buyer may want to change an order, check on delivery dates or make a related purchase. The seller may want feedback. For younger generations growing up with the Internet, messaging apps represent a natural way to interact with customer service representatives.

Although most smartphones host dozens of apps, few are used regularly. Messaging apps are among this chosen few. In fact, communications apps (social networks/messaging apps) soak up a huge amount of consumers’ time and attention. Data from comScore, for example, shows that social networks accounts for between one fifth and one quarter of all the time that consumers spend on digital services (see Figure 2).

Figure 2: Share of digital time of different categories of apps 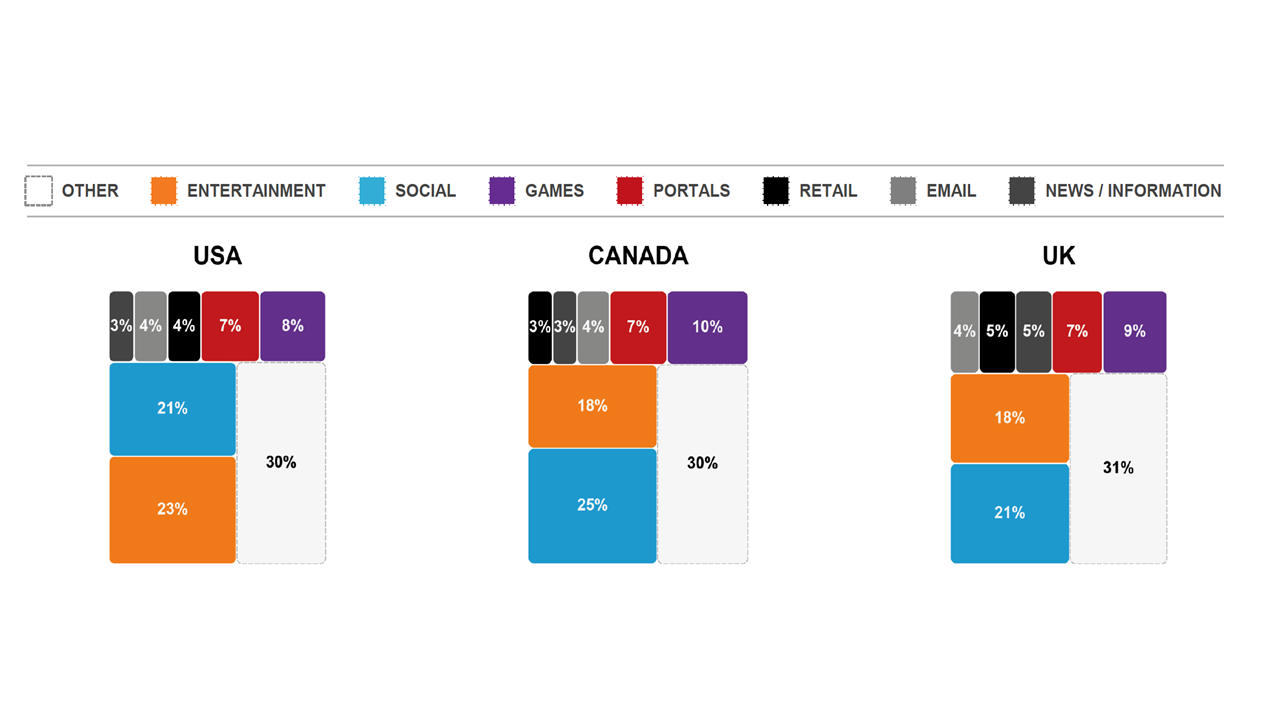 Merchants and brands need to go where their customers are and one of those places is messaging. Messaging apps are typically always running, frequently generating notifications. That means, for many consumers, a messaging app could be a convenient place from which to make purchases – it saves them the hassle of switching to another app or using a web browser. In an interview with Tech in Asia, Joe Hukum co-founder Ajeet Kushwaha noted: “Conversational commerce is going to offer Convenience 2.0 – better and bigger than Convenience 1.0 offered by e-commerce,” adding that Joe Hukum plans to make API (application program interface) integrations with a range of partners in order to enable quick transactions. “We’re at a point where the way we consume and transact is going to change drastically,” he contended.

The success of WeChat and the lessons it holds for other communications players suggests Kushwaha could well be right.