It’s hard to make things work in the IoT - it's anything but plug and play. This report outlines why, what is needed, and current leading-edge efforts to achieve it. To deliver the benefits of the Coordination Age, all manner of "things" will need to be able to discover each other and communicate more autonomously. For this to happen easily and securely a new enabler is needed: the Internet for Things (I4T).

The Internet for Things and the Coordination Age

This is driven by a global need to improve the efficiency of resource utilisation, arising from a combination of developments in both demand and supply. In terms of demand, there are pressing needs from all customers to make less do more. On the supply side, technologies like AI, automation, ‘digitisation’, NFV/SDN, and potentially 5G, provide a smarter and more flexible way to do things.

The consequence is that coordination is the job that needs to be done across many market areas. People, things and information need to be brought together at the right time and in the right place to deliver the desired outcome.

The best description we’ve come up with for the common need across these areas is “to make our world run better”. It’s not a generic do-gooding mission, it’s about improving what people and companies get for their time, money, effort and attention.

It’s an over-arching principle (or meta-trend) that makes sense of, and gives direction to, the many technology led ideas like “Internet of Things”, “Industry 4.0”, and others.

It matters because to have a winning strategy first requires a superior (or at least appropriate) mental grasp of the environment, or frame of reference, for that strategy.

Put another way, if you don’t understand how the new game is being played, how can you possibly win?

Telcos frequently missed this trick in the previous 30-year transition into the Information Age. 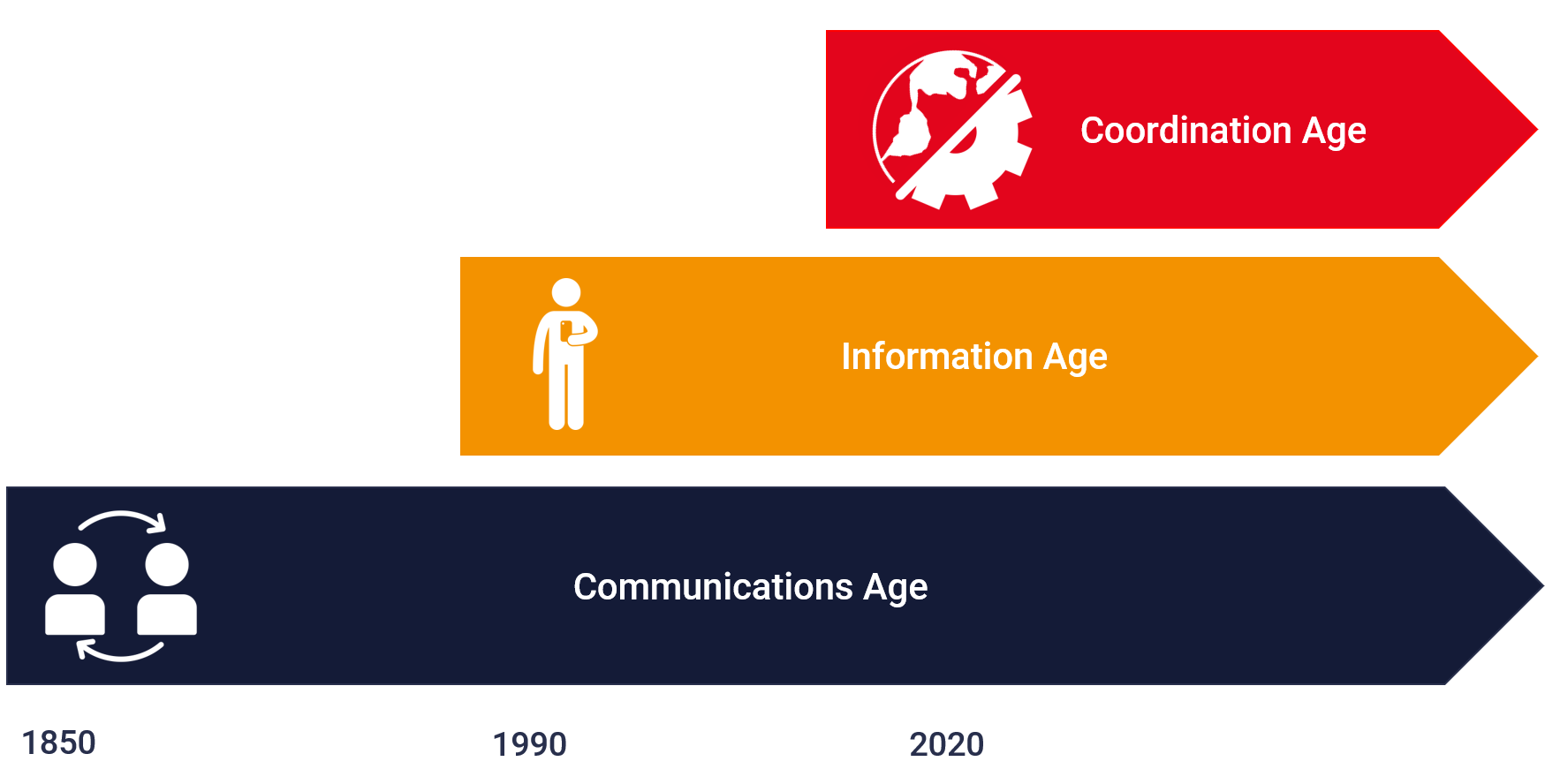 Over the last 30 years, telcos have continued to think, talk and act like network builders. Consequently, telcos did well out of the broadband and mobile data revolution, but they largely missed out on the services that make use of the raw connectivity and turn it into something more useful.

There are numerous examples of changes the Information Age brought to communications, information discovery, and commerce. These new ways of doing things have ultimately been dominated by other players, like Google, Facebook, Apple, Alibaba and Amazon.

Sometimes, when telcos spotted those opportunities, they missed out because they applied old-style business model approaches in the new world. For example, they often tried to make payments and early information products walled gardens and/or failed to grasp the need to collaborate with others to create a proposition with sufficient scale in practice (e.g. see Apple Pay & Weve Fail: A Wake Up Call).

We discuss the reasons why telcos missed opportunities in more depth in our report How the coordination age changes the game.

Now that growth is reaching the end of its cycle in communications (see Figure 2) telcos have a simple choice: stay as a pure connectivity player in a flat or declining market or develop new service propositions in addition.

Whichever route they choose (connectivity only, or connectivity plus services), to succeed and grow going forward, telcos need to rethink their purpose and role in the economy.

How does an “Internet for Things” fit with this?

From about 1990 onwards, the internet was the catalyst for change and growth in the Information Age. By making a huge trove of new information – the World Wide Web – accessible and discoverable, and enabling the delivery of data at volume, it ultimately unlocked new business models, huge disruption, and digital transformation across the entire global economy.

To move into the next age – the Coordination Age – a similar concept and mechanism is needed to be able to discover and access connected things[1].

What’s wrong with the Internet of Things?

There’s a catch with what is currently called the ‘Internet of Things’: it isn’t an internet. It isn’t even a continuous network, and as such is severely limited in its capacity to grow, evolve in intelligence and capability, and deliver the benefits sought.

The Internet of Things (IoT) originated as concept around the turn of the century and has been widely discussed since the early 2010s. Over that time many thousands of ‘smart devices’ and machine to machine (M2M) applications have been developed, creating efficiencies and enhancing functionality in industries as diverse as agriculture, logistics, transportation and medicine. Such applications continue to increase and are often described as ‘the IoT’.

However, most current applications are in reality closed (and private) command and control solutions using standalone technology to limited ends – typically to enhance existing industrial, business or lifestyle functions – such as crop-watering applications that only turn on when the ground is dry, or lifestyle apps like Nest that allow remote control of household functions.

In fact, most of what is commonly referred to as ‘IoT’ is simply an effective use of ICT, contributing to a growing world of connected things – but not constituting ‘an internet’, which is a searchable network of networks that allows users to find and connect to any end-point for which they have appropriate access[2].

There’s a second problem. What’s really needed is not just an Internet of Things, but an “Internet for Things”. Interestingly, in one of the first mentions of the concept, that is precisely what it was called.

“We need an internet for things, a standardized way for computers to understand the real world,”

The reason STL Partners thinks an Internet for Things (I4T) is a more useful concept today, is that to make some of the most complex and dynamic applications of the Coordination Age work, “things”, including not just sensors but also IT systems, will need to be able to find and communicate with each other relatively autonomously.

The essential components of an Internet for Things

A true Internet for Things, would be much more open than most current IoT systems, and would:

It could also open the door to much more radical initiatives that would combine data from multiple sources to deliver outcomes as yet unconceived of – perhaps triggering further revolutions in terms of efficiency, productivity and innovation.

So why isn’t there an Internet for Things that works more like the world-wide web, but in a machine-based context?

Many companies implicitly recognise the limitations of today’s IoT and are working on solutions to overcome them, some of which are covered in this report, while others will be examined in upcoming reports on Digital Twins and the Industrial Internet of Things (IIoT). This report details further what an Internet for Things is, how it differs from what is described as the Internet of Things, its benefits, and some of the steps that have so far been taken towards it.

What is the Internet for Things (I4T)?

Before considering what it would take to create an Internet for Things, it is useful to understand what is currently meant by the expression the “Internet of Things” (IoT).

The classic concept of an IoT “thing” is a sensor, or a connected device like a doorbell or machine in a factory. In STL Partners’ view this definition is too limited for the range of real world applications, and the “thing” being connected may be, for example:

Figure 3: Some examples of what a “thing” can be in the I4T 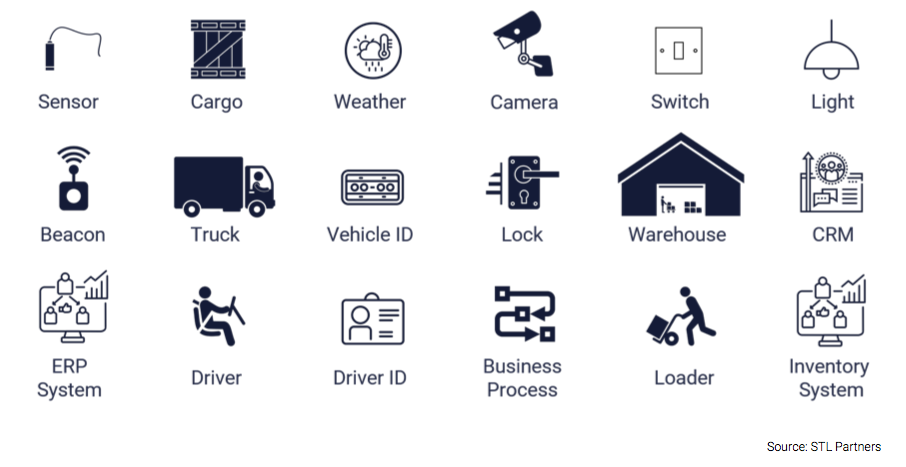 All of these are effectively “things” and their operators may need or wish to share or access this data at any time.

The Internet of Things

Most simple definitions of the IoT describe the connection across the internet of computing devices embedded in everyday devices and machines, such as sensors and actuators, enabling them to send and receive data, be monitored, adjusted, switched on and off and so on.

This describes something that is more like conventional point-to-point or client/server communications than the Internet with which most people are familiar via the world-wide web. The Internet is a relatively open space, in which participants and resources can be identified in various searchable ways – through IP addresses, email addresses, URLs etc. – and located and engaged with.

The openness of the world-wide web makes the volume and nature of possible connections between IP-enabled entities almost infinite. The interactivity between connected things in the IoT, on the other hand, is generally much more limited. It might be better described currently as a world of partially connected things.

STL’s definition of an ‘Internet for Things’ is as follows:

The Internet for Things (I4T) is an open network of participatory, connected devices, objects, processes and entities. I4T entities can be located and interacted with according to their assigned security and privacy settings.

Advantages – what are the benefits of the “Internet for Things”?

An Internet for Things would not just be a collection of smart devices. It would be a digital enabling fabric for wholly new functionality, of potentially great benefit to individuals, enterprises and our environment.

Contents of the I4T report:

[1]A suitable level of security and manageability is obviously required too. More on this later.

[2] Places on the Internet may be freely viewable to all comers or need permissions such as user IDs and passwords, for example.

[3] Kevin Ashton was a Procter & Gamble Executive who headed the MIT Center at the time:   https://www.forbes.com/global/2002/0318/092.html#7a164e0f3c3e. He is regarded as the author of the term “The Internet of Things”,  https://iot-analytics.com/internet-of-things-definition/