How AT&T, Deutsche Telekom and Orange are taking on GAFA (Google, Amazon, Facebook and Apple) in the fast-growing smart home market.

Part of STL Partners’ (Re)connecting with Consumers stream, this report analyses the role of telcos in the smart home market, which is now growing steadily in many developed countries, as consumers seek to bolster security, improve energy efficiency, adopt electric cars and further automate appliances. In most developed markets, there are scores of companies pitching often incompatible smart home products and services to householders, resulting in a fragmented mess in which consumers are often left to figure out what might work with what.

This fragmentation spells opportunity for both telcos and the major Internet platforms – both sets of companies can use their role as a supplier of a key part of the smart home proposition (connectivity and computing devices respectively) as a springboard into the smart home solutions space.

In the case of Apple, Amazon and Google that means using the smartphone, the tablet and/or smart speakers as a segue into this market, while telcos can build on their connectivity offering, which is a fundament to the concept of a smart home that can be monitored and controlled from anywhere.

The challenge facing both sets of players is essentially delivering the systems-level integration required to simplify the consumer proposition into a seamless end-to-end offering that will appeal to the mass market. Without coherent coordination, the smart home will continue to characterised by of point solutions.

This report begins with an overview of the smart home sector and the competitive landscape, paying particular attention to the strategies of the major Internet platforms – Amazon, Apple and Google. It then goes on to discuss Deutsche Telekom’s and A&T’s contrasting strategies in this space, before making some recommendations for telcos.

This report is the first in a series looking at smart home/connected consumer propositions from telcos. Future reports will analyse how the leading Asian telcos are targeting this market, while exploring related propositions, such as connected bikes and scooters, pet tracking and asset monitoring and insurance.

In an ideal world, a householder would be able to remotely monitor and control all the systems in their home, simply by pressing a button to activate and deactivate heating, air conditioning, alarms, locks, cameras and appliances, such as washing machines and automated vacuum cleaners. Although this concept, known as a smart home, has been around for many years, it is only now beginning to come of age. The smart home could also become an enabler for the sharing economy, making it easier for people to rent out their homes, monitor energy usage and take out appropriate insurance cover.

Up until very recently, most so-called smart home implementations amounted to partial solutions, enabling a householder to check their energy usage or a CCTV camera, rather than get a complete picture of what is happening in their property. In other words, most suppliers have focused on discrete point solutions designed for a fairly narrow use case.

While homes in developed markets have a growing number of connected devices (such as televisions, sound systems, printers, smart meters and burglar alarms), they rarely exchange information and typically can’t be managed through a single app or desktop interface.

This lack of coordination is a result of the diversity of the many different players supplying consumers with connected equipment and services for their homes, ranging from utilities and security companies to equipment makers and tech companies.

Indeed, a smart home value chain can be very complex and diverse. To make a home really smart, you would typically need:

Today, most telco-led smart home implementations take an ‘inside out’ approach in which the hub is located in the home: short range wireless technologies collect data from connected devices, which are aggregated in the hub and are then made available to the consumer via a smartphone app. In this scenario, the hub is generally connected to a fixed-line network via WiFi. However, 4G and 5G technologies, such as NB-IoT and LTE-M, could make it feasible to connect more devices directly to a cloud-based hub, which could ultimately allow smart homes to emerge in the many communities not served by fixed-line networks.

In some markets, these two approaches may be combined: cellular connectivity may be used to back-up WiFi, while some data and services will reside in both the cloud and on a local device in case the wide area connectivity fails or is tampered with.

For telcos providing the underlying fixed-line or cellular connectivity, the sheer variety of players touting smart home products and services makes the market both complex and challenging. Figure 1, an overview of the smart home ecosystem produced by the GSMA, highlights how many different angles there are on the smart home concept. However, even this chart is an over-simplification – the smart home market also overlaps with the personal transport market to some extent. Some of the potential use cases, such as charging electric vehicles, require coordination between the consumer’s home and vehicle.

Figure 1: The smart home ecosystem is complex and fragmented 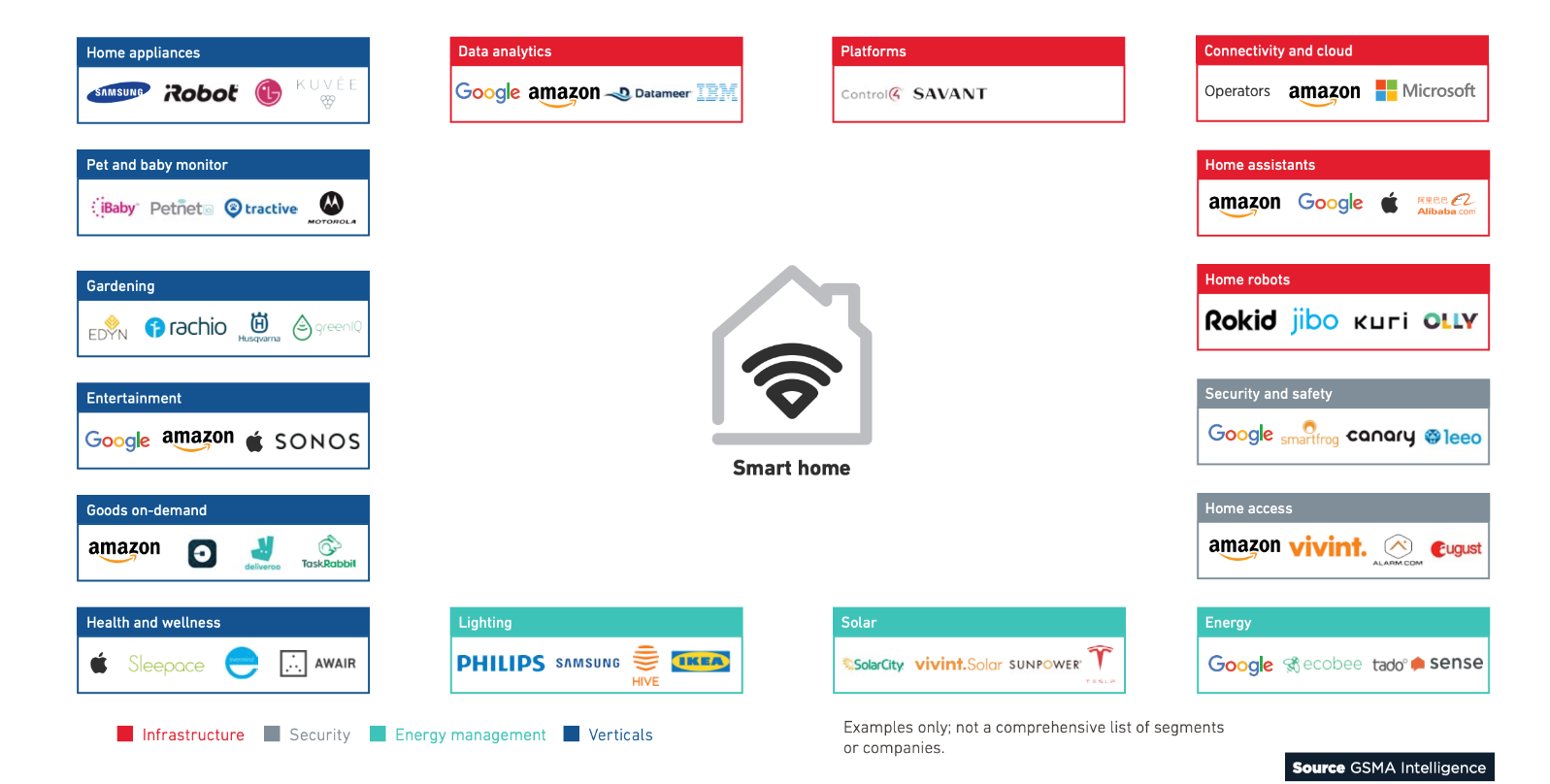 Given the breadth of the smart home market and the blurred lines between it and other segments, sizing it in dollar terms is difficult. Research firm Strategy Analytics estimates worldwide consumer spending on smart home devices, systems and services totalled US$84 billion in 2017 and will reach almost US$96 billion in 2018.

For example, should the total sale price of a washing machine with built-in WiFi be included? Or should analysts just count the value of the connectivity module? What if the WiFi is never activated? In any case, it is clear that the market is growing steadily as the cost of adding connectivity to consumer appliances and devices falls. The cost of adding a WiFi or cellular module to an appliance is in the region of US$10 to US$20, depending how many frequencies it supports and which radio technology is used.