The global digital economy is moving into a new age: The Coordination Age. A global need to improve the efficiency of resource utilisation is manifesting in industries and individuals as a desire to “make the world work better”. What role can telcos play in this, and will that ultimately mean the break-up of the telco as we know it?

The world is entering the Coordination Age, driven by growing needs for resource efficiency and enabled by new technologies such as AI, automation, IoT, 5G, etc. What does this mean, how is it different, how is it an opportunity, and what should telecoms industry players do?

The core telecoms industry is currently close to reaching maturity as the following chart illustrates.

Figure 1: Revenue growth is grinding to a halt

This approaching maturity has taken many years to achieve and is built on decades of astonishing growth in the telecoms and ICT industries as shown by just a few data points in Figure 2.

Figure 2: 30 years of telecoms in context

We’ve used AT&T as a comparator as perhaps the world’s best-known telco, and because its 1988 revenues are readily accessible. The chart shows that AT&T has grown massively but also that recent growth has slowed.

It also shows how mobile and internet use has blossomed to mass-market adoption. No-one knew in 1988 that this is what would happen by 2018, or how it would happen. Most people would have thought you were talking about science fiction if you said there would be more mobiles than people in their lifetime, and that half the world would have access to most of the world’s information.

Yet it was clear that growth in telecoms lay ahead – it seemed like a kind of economic and social gravity that communications would grow a lot. The direction that the world would take was obvious and unavoidable. So many people were not yet connected, and so much was possible in terms of improving the world’s access to information using the technologies that were coming to fruition then.

What are the big problems the world needs to solve now?

It’s not a mystery now, of course. And while there’s plenty of work to do to make the world’s connectivity better and bring the second half of the global population online somehow, it’s unlikely to bring in masses of new revenues for telcos. So why the Coordination Age?

To create major growth, you need to solve some big, valuable problems. So, what are the big problems the world needs to solve?

There are some obvious candidates, e.g.:

Moreover, time is also a resource for people and business. Both want to make best use of their time – whether it is getting things done more effectively or enjoyably.

Making the most of what we have

STL Partners believes that these are all to some extent the manifestation of the same problem: the need to make the most efficient possible use of your/the world’s resources. In Figure 3 we call this helping to “make our world run better” for short.

Figure 3: How macro forces are creating a common global need 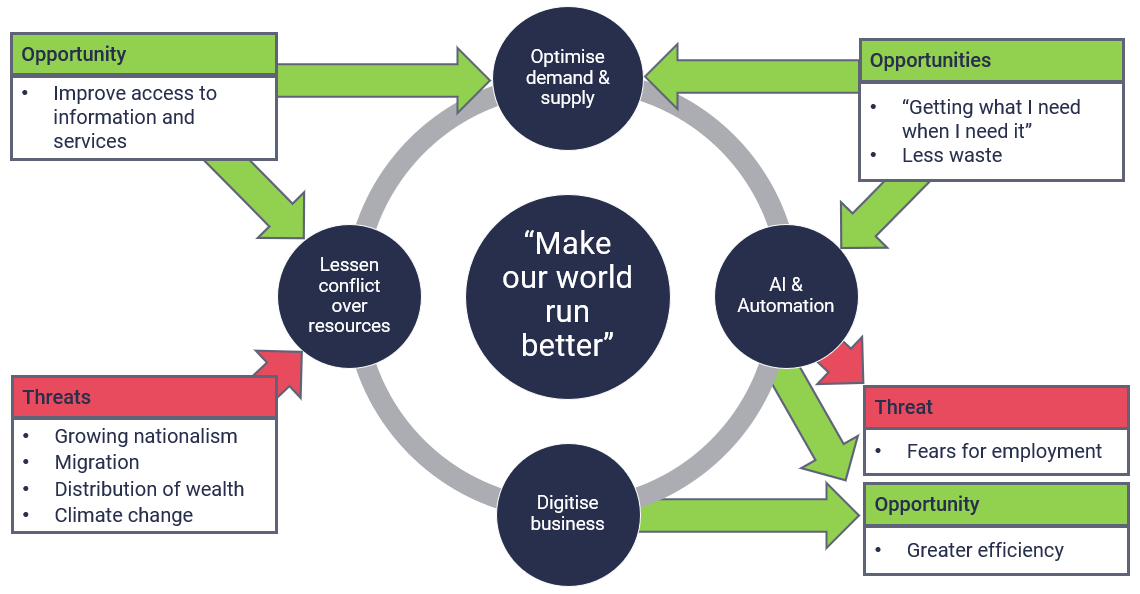 The underlying need for greater resource efficiency is widespread. While sustainability arguments are prominent symptoms of the problem, there are pressing needs being expressed in all areas of the economy for better utilisation of resources.

For example, most businesses are somewhere in the process of their own transformation using connected digital technologies. Almost every aspect of business, including product design, customer experience, production, delivery and value chain orchestration is being revolutionised by ‘digital’ technologies and applications.

Examples cited at the Total Telecom Congress in October 2018, included:

All of these are examples of where telcos are already thinking about or addressing customers’ needs with respect to resource efficiency, in all of these cases via a B2B application, but the concerns apply to consumers too.

Ipsos’s global survey on consumer concerns from July 2018 (Figure 4) gives a flavour of what people across the world worry about today. The colouring applied to categorise the issues is STL Partners’, based on our view of their relevance to resource utilisation and distribution (and hence the Coordination Age).

Clearly, the weighting of needs varies in different countries, but most of the most pressing concerns relate to the distribution of economic resources within society (red bars). Concerns on social resources such as education and healthcare (orange bars) are second in prominence, while more classic ‘environmental’ worries (grey bars) are slightly further down the list.

People’s concerns also vary with their current circumstances. The closer you are to the bread-line, the more likely you are to prioritise where your next meal is coming from over the long-term future. Hence there is a natural tendency for near-term concerns to feature more highly on the list.

Many other day-to-day concerns relate to the efficient use of time (another resource): prompt service, availability of resources on-demand, business productivity, etc.

The fundamental enabler needed is coordination: the ability to enable many different players, devices, solutions, etc., to work together across the economy. These players and assets are a diverse mixture of both physical and digital entities. The drive to allow them to work together must be widespread and ultimately systematic – hence the Coordination Age.

The thorny issue of sustainability

We now live in a world of seven billion people that uses 1.7 times its sustainable resources (Figure 5). The argument goes that if we keep on at this rate we will face major environmental and societal pains and problems.

Figure 5: What does “the world need now”? 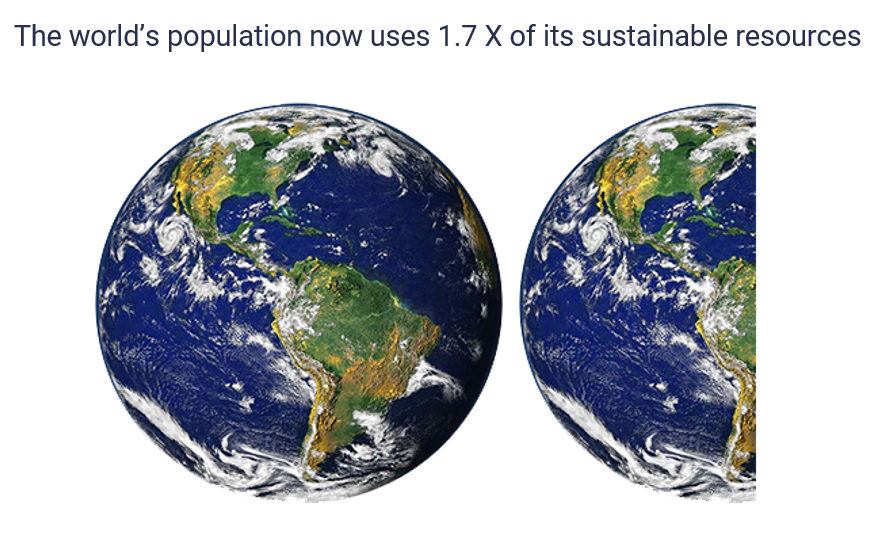 Climate change is arguably one consequence of the over-use of resources. Not everyone buys in to such concerns, and it is a matter for each person to make their own mind up.

However, even traditionally highly conservative bodies like the UN’s International Panel on Climate Change Panel (IPCC) are sounding alarm bells. In its recent report “Global Warming of 1.5 °C”, the IPCC says we may not even have thirty years to avoid the worst problems.

The editorial in The New Scientist put it like this:

“We still have time to pull off a rescue. It will arguably be the largest project that humanity has ever undertaken – comparable with the two world wars, the Apollo programme, the cold war, the abolition of slavery, the Manhattan project, the building of the railways and the roll-out of sanitation and electrification, all in one. In other words, it will require us to strain every muscle of human ingenuity in the hope of a better future, if not for ourselves then at least for our descendants.”[1]

The challenge is huge, and it reaches across all economies and sectors, not just telecoms.

STL Partners believes that telcos and the telecoms industry can play a significant role in addressing these issues, and moreover that the industry should move in this direction for both business and social reasons.

This should not be treated as a PR opportunity as it sometimes has in the past, as a kind of fop to regulators and governments in exchange for regulatory preferences.

It is a serious and significant problem to solve for humanity – and solving such problems is also how industries create new value in the economy.

Nonetheless, STL Partners believes that if telecoms industry players genuinely take on the challenges of addressing these issues, it may well have a significant impact on their sometimes-troubled relationships with governments and regulators. It’s one thing to be a big economic player in a market, which most telcos are, and quite another to be a big economic and social partner in an economy.

By truly aligning these goals and interests with governments telcos can start to foster a new dialogue “what do we need to do together for our economy?” This requires a very different level of heart-and-soul engagement than a well-intentioned but peripheral gesture under the Corporate Social Responsibility (CSR) banner.

First, the idea of ‘moving the needle’. So many new opportunities are dismissed because they simply don’t seem big enough for a telco to bother, and telcos continue to search for the next ‘killer app’ like mobile data or SMS.

Despite looking for many years, it still hasn’t been found. Yet somehow the telecoms industry has missed out on capitalising on social media, search, online commerce – pretty much all growth industries of the last twenty years.

Why? For many reasons, no doubt. But there has certainly been a kind of well-fed corporate complacency, a general aversion to commitment to new ideas, and a huge reduction in investment in R&D and innovation. Telcos’ R&D spends are minuscule compared to technology players. We will publish more on this soon, and why we think telcos need to change.

This has gone arm-in-arm with a failure to understand that new business models are not linear and predictable. A sound business case is all very well when you have a predictable business environment. This is typically the case when looking at incremental changes to existing businesses where the consequences are relatively predictable.

In new areas, especially where there are network effects and other unpredictable and non-linear relationships, it’s very hard to do. Even if you succeeded in making a numerical model, most would frown heavily at the assumptions and their consequences, and the decision-making process would stagnate on uncertainty.

Where companies have been successful in building new value, they have at some point made a serious management commitment against a need that they recognise will persist in their market, continued to invest in it, and be willing to admit and learn from mistakes. We would cite TELUS in Healthcare, and Vodafone’s M-PESA as examples where leadership has protected and nurtured the fragile flower of innovation through to growth.

… and moving the people

The second big internal challenge to change and growth has been much of the telecoms industry’s inability to excite its people to buy in to the uncertain and worrying process of change.

Change and its accompanying uncertainties are uncomfortable for most people, and they need support, guidance and ultimately leadership to see them through. Too often, companies only truly address change when they sense the ‘burning platform’ – a (usually threatening) reason that means they simply must abandon their current beliefs and behaviours.

And frankly, why should most employees care about, for example, their company ‘becoming digital’? They care about being paid, having a job with some status, and being reasonably comfortable with what they must do and who they do it with. They are working to support themselves and their families. To most, “becoming digital” sounds like another excuse for a round of job cuts – which in some cases it is.

Our argument is that there is now a powerful new job for telecoms companies to do in the Coordination Age, and that this means we all must change. If we don’t do that job and make those changes, the future will potentially be much worse for us and them as we age, and their kids as they grow.

We believe that the additional insight in the story as we now see it should make it compelling to customers, employees, governments and shareholders. But first, the management of the telecoms industry need to grasp it, improve it and lead the rest forward.

Contact us to get a full copy of the report.