Are BT, AT&T and Swisscom making an attractive return on their major investments in content?

An in-depth analysis of whether telcos can make money from original content, this executive briefing builds on previous STL reports exploring the role of telcos in entertainment and advertising:

Following the acquisition of Time Warner, AT&T is a content owner and content distribution colossus. What is its underlying objective for providing a wide range of over-the-top (OTT) services, including DTV Now (satellite TV service delivered over-the-top) and AT&T Watch (live and on demand content)? How will content from Time Warner’s acquisition in June 2018 be incorporated into its products?

Has BT’s head on clash with Sky in the market with live sports met expectations? Has its heavy investment in football grown its revenue take, broadband subscriptions and attracted eyeballs?

Swisscom has grown to become Switzerland’s largest TV provider, using live sports as its differentiator. What other initiatives have contributed to its market leadership and can it maintain its dominance?

But trying to pursue all these objectives simultaneously requires some difficult compromises – maximising content revenues means distributing the content as widely as possible, which means it no longer becomes a competitive differentiator through which to sell connectivity and build loyalty to the core proposition. In any case, regulators may require telcos to make some original content, notably the rights to live sport, available to competitors.

Therefore, achieving all of these objectives requires telcos to perform a delicate balancing act between making their content widely available and integrating it with the core connectivity proposition from both a technical perspective (using a cloud-based or physical set-top box) and a commercial perspective (attractive bundles and/or zero-rating the content). They need to perform this balancing act at a time when the digital entertainment market is in upheaval – customers in many markets are migrating from traditional pay TV (one or two year contracts) to video-on-demand subscriptions (month-by-month).

Ownership of sports rights should guarantee an audience linked to the size of the fanbase. Investing in original content, such as dramas, is far riskier. For every series of The Crown, a Netflix hit airing its third series in 2019, there is Marco Polo that cost US$200 million, cancelled after two series and an abject failure. Telco shareholders would baulk at taking such risks, given many have qualms about BT’s investment in Premier League rights (32 matches a season, 2019-22), which are equivalent to £9.2 million per game.

Alternatively, telcos could purchase a content developer/media company with a back catalogue of proven programming, as AT&T has done by buying Time Warner in June 2018. Investment in original content is a differentiator for pay TV providers (e.g. Sky) as well as over-the-top players (e.g. Netflix). Netflix has dramatically increased its investment in original content from its early foray with the House of Cards. During 2018 Netflix invested about US$6.8 billion in original content, including films, simultaneously screening some films at cinemas (e.g. Coen brothers’ The Ballad of Buster Scruggs).

However, the audience for expensively-created content is finite. They are binge watching fewer shows. In the USA, according to Hub Entertain Research, viewers watched an average of 4.4 favourite shows in 2018, compared to 5.2 in 2016. These viewers increasingly find out about favourite shows through advertisements and watch them on an video-on-demand service.

Although they benefit from economies of scale and scope, the major global online players are not oblivious to the risks of creating original content. Amazon somewhat mitigates the risk by using co-production. Amazon is working with pay TV companies (e.g. Sky / Sky Atlantic) as well as public service broadcasters (BBC). The co-production of content with Sky provides Amazon with the rights to show series outside Sky’s footprint. For the BBC, a junior partner in the relationship, it gets to air the co-produced programmes after Amazon has shown them (e.g. the final three series of Ripper Street). Apple is also investing US$1 billion in original content, which will be distributed by its new streaming service[1]. The new service, business model unknown, will also be accessible on non-Apple products. New Samsung, Sony, LG and Vizio TVs will support Apple iTunes movies and TV shows[2].

It is not just the major Internet platforms that are competing with telcos for eyeballs. Major content rights owners are also taking their first steps to launch direct-to-consumer services. The Disney Play streaming service will launch in late 2019, once its existing distribution agreement with Netflix comes to an end. New sports streaming services are vying for attention, e.g. DAZN owns the rights to English Premier League (EPL) in Germany, Switzerland, Austria and Japan, as well as combat sports (e.g. Matchroom Boxing and UFC) and other sports. Many sports federations also provide direct-to-consumer streaming services, alongside the sale of linear TV sports rights. These include The National Hockey League’s NHL.TV and National Football League’s GamePass in the USA, and the English Football League (EFL)’s iFollow service in the UK. Consumers outside the UK can also pay to stream EFL matches.

But it is not just about having the right content: consumers also want the right commercial proposition. Pay TV providers recognise that not all consumers are willing to sign-up to 12- or 18-month contracts. Falling pay TV subscription rates, and a realisation that one-size doesn’t fit all has seen the emergence of month-to-month skinny pay TV packages. These offers may or may not be packaged with broadband connectivity.

There are essentially four key roles in the content value chain, identified and discussed by STL partners in previous reports. These roles are programme, package, platform and pipe. Traditionally, telcos’ primary objective is to sell as many pipes as possible. To that end, they offer packages of content (generally TV channels), which are sold on a subscription basis or offered for no fee, supported by advertising. A platform is used to distribute the channels, films and other content created and curated by another entity. 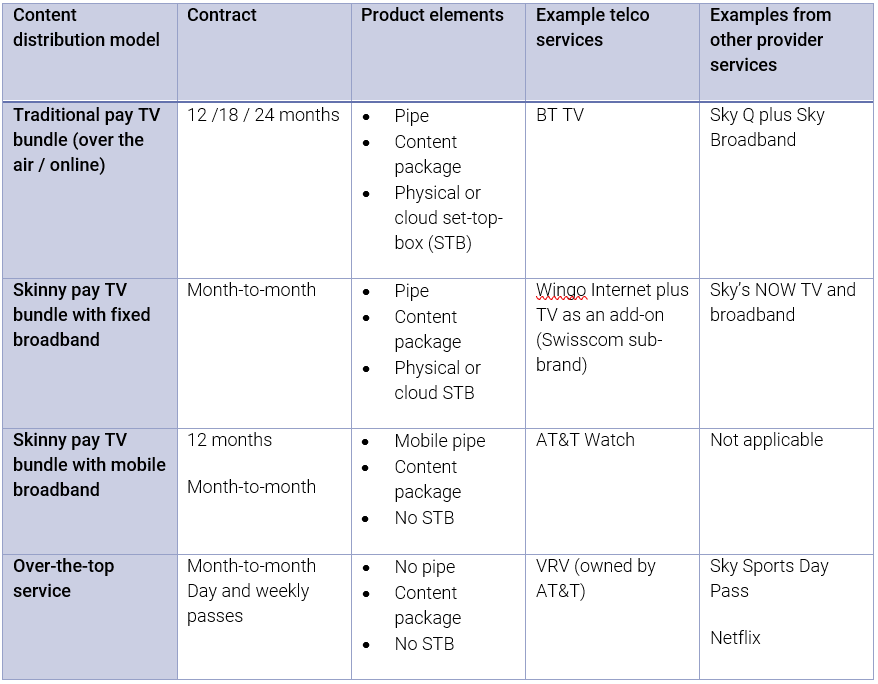 An in-depth analysis of telcos’ return on investment in sports or film rights or original content is tricky. Telcos are not in the habit of revealing content revenue data. Figure 5 summarises the main metrics that need to be considered to evaluate the effectiveness of telcos’ investment in content.

The revenues that telcos can generate from content consist primarily of:

In the rest of this report, we evaluate AT&T, BT and Swisscom against these criteria.

[2] Content can be streamed from an Apple device using Apple’s AirPlay wireless streaming protocol stack, which will be integrated into TVs.