In 2014, AT&T launched its Domain 2.0 Programme to virtualise 75% of its network functions by 2020. So how is it going, and what are the lessons for others on the complex journey to the virtualised / agile Telco 2.0 digital vision?

AT&T publicly launched its plan to transform its network to a cloud-, SDN- and NFV-based architecture at the Mobile World Congress in February 2014. The program was designated as the ‘User-Defined Network Cloud’ (UDNC).

The initial branding, which has receded somewhat as the program has advanced, reflected the origins of AT&T’s strategic vision in cloud computing and the idea of a software-defined network (SDN) where users can flexibly modify and scale their services according to their changing needs, just as they can with cloud-based IT. This model also contributed to an early bias toward enterprise networking, with AT&T’s first major SDN-based service being ‘Network on Demand’: an Ethernet offering allowing enterprises to rapidly modify their inter-site bandwidth and make other service alterations via a self-service portal, first trialed in June 2014.

Data center-based infrastructure and SDN architectural principles have remained at the heart of AT&T’s vision, although the focus has shifted increasingly toward network functions virtualization (NFV). In December 2014, the operator announced it had set itself the target of virtualizing (NFV) and controlling (SDN) 75% of its network via software by 2020.  What this actually means was spelled out only in mid-2015, by which time AT&T also indicated that it expected to have virtualized around 5% out of the targeted 75% by the end of 2015.

What the 75% target relates to specifically are the 200 most vital network functions that AT&T believes it will need to take forward in the long term; so this is not an exhaustive list of every network component. The list comprises network elements and service platforms supporting IP-based data and voice services, and content delivery, ranging from CPE to the optical long-haul network and everything in between. What the list does not include is functions supporting legacy services such as TDM voice, frame relay or ATM; so the UDNC involves a definitive break with AT&T’s history as one of the largest and oldest PSTN operators in the world.

Correspondingly, this involves huge changes in AT&T’s culture and organization. The operator uses the term ‘pivot’ to describe its transformation into a software-centric network company. The word is intended to evoke a sort of 180o inversion of AT&T’s whole mode of operation: a transition from a hardware-centric operator that deploys and operates equipment designed to support specific services – and so builds and scales networks literally from the ground up – to a ‘top-down’, software-centric, ‘web-scale’ service provider that builds and scales services via software, and uses flexible, resource-efficient commodity IT hardware to deliver those services when and where needed.

AT&T has described the culture change needed to effect this pivot as one of the toughest challenges it faces. It involves replacing a so-called ‘NetOps’ (network-operations) mentality and team structure with a ‘DevOps’ (collaborative, iterative operations-focused software development) approach, with multi-disciplinary teams working across established operational siloes, and focusing on developing and implementing software-based solutions that address particular customer needs. According to AT&T Business Solutions’ Chief Marketing Officer, Steve McGaw, the clear parameters that the operator has set around the SDN architecture and customer-centricity are now driving team motivation and creativity: “A product that is going to fit into the SDN architecture becomes a self-fulfilling prophecy . . . . Because we have declared that that is the way we are going to do things, then there is friction to funding that doesn’t fit within that framework. And so everyone wants to get [their] project funded, everyone wants to move the ball forward with the customer and meet the customer’s needs and expectations.”

Allowing for some degree of marketing gloss, this description nonetheless portrays a considerable change in established ways of working, with hundreds of network engineers being retrained as software developers and systems managers. The same can be said for AT&T’s collaboration with third parties in developing the SDN architecture and virtualizing so many crucial network functions. AT&T is partnering with 11 vendors – both established and challengers – on the UDNC project, co-opting them into its dedicated Domain 2.0 supplier program. These vendors are:

In addition, in another challenge to AT&T’s traditionally proprietary mode of operation, the operator is collaborating extensively with a range of open source and academic initiatives working on various pieces of the SDN / NFV jigsaw. These include:

If you want to understand how this all fits together, consider the CORD project’s architecture as shown in Figure 1. CORD is an AT&T research project which aims to transform its local exchanges, Central Offices in US parlance, into small data centres hosting a wide range of virtualized software applications. As well as virtualizing the core telco functions based there, they will eventually also provide edge hosting for new products and services. The structure of CORD is the template for how AT&T intends to virtualize its network and how it intends to work with the three open-source groups ON.Lab, OpenDaylight, and OPNFV. Figure 1 shows how services are created in the XOS orchestration platform out of OpenStack virtual machines, OpenDaylight network apps, and ONOS flow rules.

Figure 1: How the Central Office Re-architected as a Datacenter project works 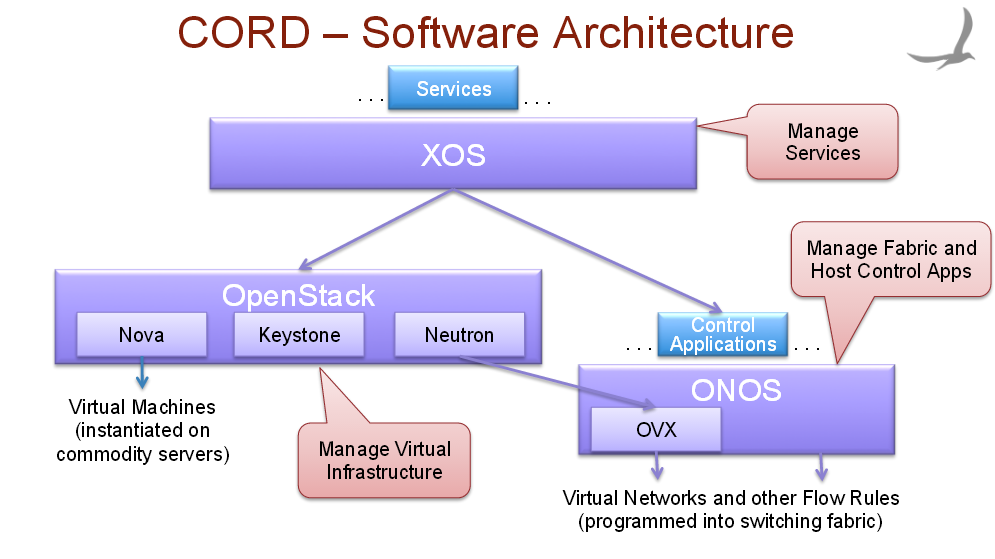 This means that AT&T can …