The latest report in STL’s new Dealing with Disruption in Communications, Content and Commerce stream, this executive briefing is the first part of a two part report analysing China’s leading digital disruptors and their likely impact outside their home country. The report explores whether the global leaders in digital commerce – Amazon, Apple, Facebook and Google – might soon face a serious challenge from a company built in China.

Part 1 analyses China’s two largest digital ecosystems – Alibaba, which shares many similarities with Amazon, and Tencent, which is somewhat similar to Facebook. This executive briefing considers the intensifying arms race between these two groups in China, their international ambitions and the support they might need from telcos and other digital players.

Both Alibaba and Tencent are potential competitors for telcos in some markets and potential partners in others. For example, like Amazon, Alibaba has a fast growing cloud computing business. (STL recently analysed why Amazon Web Services is so much more successful than many telcos’ cloud offerings, see: Amazon Web Services: Colossal, but Invincible?).

Like Facebook, Tencent has become a leading provider of digital communications in direct competition with telcos’ voice and messaging services. STL explored how telcos could respond to the rise and rise of Facebook in our recent report: Facebook: Telcos’ New Best Friend?

Part 2 of our report on China’s digital disruptors will cover Baidu, China’s answer to Google and the anchor for a third digital ecosystem, and the fast-growing smartphone maker, Xiaomi, which has the potential to build a fourth major ecosystem. Part 2 will also take a close look at DJI, the drone manufacturer, which is well worth watching for its mid-to-long term potential to create another major ecosystem.

When it comes to disruption, China is a special case. Offering an enormous domestic market largely insulated by regulation, this vast country is proving to be fertile ground for Internet companies that may ultimately be able to mount a credible challenge to the big four globally – Amazon, Apple, Facebook and Google.

These four U.S.-based disruptors have used the scale and talent available in their home market to become leading digital commerce players globally, limiting the mindshare and market share available to other players. Moreover, Apple and Facebook, in particular, are carving out a strong position in digital communications, challenging telcos’ traditional dominance of this sector.

Greater competition among the Internet ecosystems would be in the strategic interests of many telcos, media companies and banks, as they seek to shore up their revenues and relevance. To that end, they could selectively encourage digital commerce and content companies that have gained sufficient scale in China to go global and compete with the U.S. giants.

In an ideal world, there might be a dozen or so major Internet ecosystems competing for a share of the worldwide digital commerce market. That would put individual telcos and other specialist players in the digital ecosystem, such as banks and media companies, in a stronger negotiating position, potentially enabling them to capture more of the value being created in the fast growing digital economy. For example, if Tencent were to mount a serious challenge to Facebook, telcos could potentially earn a commission for promoting one service over the other. Telcos could preload Facebook’s WhatsApp messaging service or Tencent’s WeChat on the handsets they distribute or they might zero-rate access (not charge for data traffic) to either service in their markets.

Similarly, if Baidu could build effective international search and content services in competition with Google, the latter may have to pay higher commission to companies that supply it with traffic. If Google faced more competition in the digital advertising market, media companies’ sites may have to pay less commission to advertising brokers. In the smartphone market, if Xiaomi were to weaken Apple’s grip on the high-end, telcos’ might be able to negotiate better margins for distributing Apple’s handsets or enabling iPhone users to temporarily subscribe to their networks when travelling abroad.

Greater incentives to expand outside China

China’s economy is on course to grow about 7% this year, according to government figures, down from the double-digit growth at the turn of the decade. As a result, its leading disruptors are increasingly treading on each other’s toes in China and have a greater incentive to expand internationally. Although the obvious move for China’s domestic Internet companies it to initially target Greater China, nearby Asian markets and the Chinese diaspora, some have much broader ambitions. Alibaba, in particular, has significant traction in other major middle income countries, notably Russia. And the world’s leading drone maker DJI is making major inroads into the U.S. and Western Europe – the heartland of Apple, Google, Amazon and Facebook.

Today, there are three major Internet ecosystems in China, headed by Alibaba, Tencent and Baidu respectively. Globally, these three players are in the top ten public Internet companies in terms of market capitalisation (see Figure 1). Moreover, Tencent has forged an alliance with JD.com, the fourth largest publicly-listed Chinese Internet company.

The first part of this report covers Alibaba and Tencent, asking whether either company is strong enough to pose a serious threat to Amazon, Facebook or Google on the global stage.

Figure 1: China is home to four of the world’s most valuable publicly-listed Internet companies 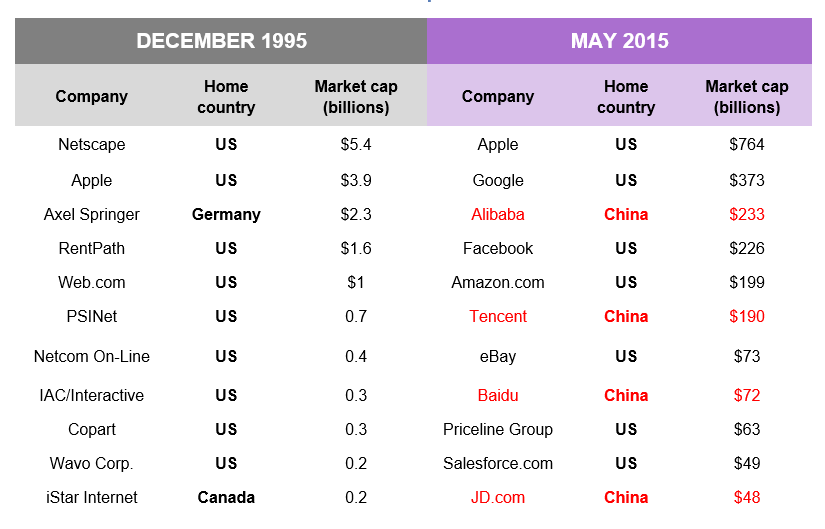 Whereas most consumers in Western Europe and North America have heard of Amazon.com, many might associate Alibaba with folklore, rather than digital commerce. Yet Alibaba Group Holding Ltd. claims to be the world’s largest online and mobile commerce company in terms of gross merchandise volume (the value in US dollars of the products and services sold through its marketplaces). Although it is incorporated in the Cayman Islands, the Alibaba Group’s principal executive offices are in Hangzhou in China.

Founded in 1999 by its charismatic, combative and somewhat unpredictable executive chairman Jack Ma, Alibaba undertook the world’s largest initial public offering in September 2014. It raised USD 25 billion, which it has used to fund an ongoing acquisition spree.

Why Alibaba is important

With a market capitalisation comparable to that of Amazon and Facebook, investors clearly believe Alibaba is set to be a major player in the global economy. That belief is fuelled by the fact that Alibaba:

The use of edge computing is accelerating rapidly in applications such as live streaming, drone management, and AR/VR. Developers, the key catalyst of growth, need infrastructure fast and certainty on pricing. Through seven case studies we outline why developers want from edge computing, and how telcos can support them.