As they seek new sources of revenue, many telcos around the world are attempting to disrupt adjacent markets, such as digital commerce, IT, entertainment and financial services. While many of these moves have proved to be too little, too late, several disruptive plays have had a significant impact on both the telco’s revenues and relevance. These include NTT DOCOMO’s Smart Life portfolio, Globe Telecom’s GCash service and KT’s media business. Why do some disruptive moves by telcos succeed and others fail?

The latest report in STL’s new Dealing with Disruption in Communications, Content and Commerce stream, this executive briefing is the second in a two-part series exploring the role of telcos in disrupting the digital economy. Across the two parts, STL has analysed a variety of disruptive moves by telcos, some long-standing and well established, others relatively new.

Part 2 takes a close look at NTT DOCOMO, Japan’s leading mobile operator, which has built up a major revenue stream from new businesses. Many of these new businesses are focused on enabling what DOCOMO refers to as a Smart Life. Revenues from its Smart Life suite of businesses, which provide consumers with advice, information, security, cloud storage and other lifestyle services, rose 22% to 421 billion yen (US$3.5 billion) in the year ending March 2015.

Part 2 also considers how South Korea’s incumbent telco KT used its high-speed broadband infrastructure to disrupt, but ultimately strengthen, its media business, which delivers IPTV to approaching six million households. This report also examines how Globe Telecom has carved out a significant position in the Philippines’ financial services market by enabling people to send each other money using text messages over a decade of patient experimentation. It also explains why the leading U.K. and U.S. mobile operators have struggled to disrupt the digital commerce market with their Weve and Softcard joint ventures.

Note, this report is not exhaustive. The examples it covers are intended to be representative. Some of these companies and their strategies are covered in other STL Partners reports, including:

Introduction: Telcos Can and do disrupt

In the digital economy, start-ups and major Internet platforms, such as Alibaba, Apple, Facebook, Google, Spotify and Tencent QQ, are generally considered to be the main agents of disruption. Start-ups tend to apply digital technologies in innovative new ways, while the major Internet platforms use their economies of scale and scope to disrupt markets and established businesses. These moves sometimes involve the deployment of new business models that can fundamentally change the modus operandi of entire industries, such as music, publishing and video gaming.

Although established telcos have generally been cautious about pursuing disruption, several have created entirely new value propositions, effectively disrupting either their core business or adjacent industry sectors. In some cases, disruptive moves by telcos have primarily been defensive in that their main objective is to hang on to customers in their core business. In other cases, telcos have gone on the offensive, moving into new markets in search of new revenues. Figure 1 classifies various disruptive moves by telcos. Those in white were covered in Part 1 of this report, those in grey are covered in this report, Part 2. 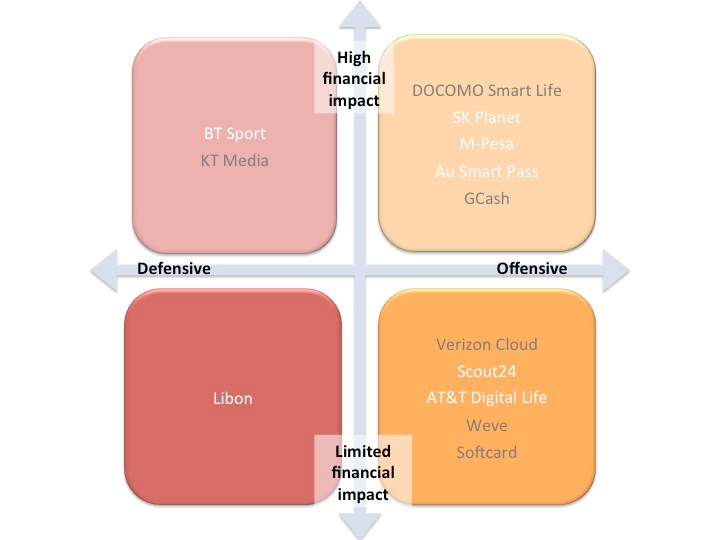 A classic disruptive play is to use existing assets and customer relationships to move into an adjacent market, open up a new revenue stream and build a major business. This is what Apple did with the iPhone and what Amazon did with cloud services. Several telcos have also followed this playbook. This section looks at two examples – NTT DOCOMO’s Smart Life services and Globe Telecom’s GCash – and what other companies in the digital economy can learn from these relatively successful moves. Unlike many disruptive moves by telcos, the two businesses covered in this section have had a significant impact in the targeted market. They have also moved the needle for their parent’s telcos and given their investors greater confidence in their ability to innovate.

Japan’s telecoms market was one of the first in the world to go ex-growth and its telcos have been searching for new sources of revenue for the best part of a decade. The market leader, NTT DOCOMO, has also been hit by an aggressive campaign by the third largest player, Softbank, to win market share. DOCOMO has seen its revenues from telecoms services decline every year since 2006, giving its efforts to expand into adjacent markets, such as entertainment, commerce and financial services, a real sense of urgency. In particular, DOCOMO has tried hard to get closer to consumers by developing a sophisticated and multi-faceted “smart life” proposition.

Rather than focusing simply on providing connectivity and fading into the background, DOCOMO is trying to maintain a close relationship with Japanese consumers. Its strategy is centred on using the data collected by its network to anticipate customers’ needs and provide them with tailored and timely propositions. In November 2011, DOCOMO set out a medium-term strategy (for the years up to and including 2015) called Shaping a smart life, which it positioned it as an interim step to realising its longer-term, corporate vision for 2020: Pursuing smart innovation: HEART (see Figure 2). This report looks, in particular, at the ‘T’ in the Heart strategy – DOCOMO’s bid to win consumers’ trust and clearly differentiate itself from other providers of digital services.

One of the central tenets of DOCOMO’s strategy is that individuals want the support of a “personal life agent” – an automated personal assistant that can make useful suggestions and recommendations. DOCOMO envisaged that this assistant would use the information collected by smartphones and wearable devices to perform various tasks, including making recommendations and even automatic ticket reservations.

In other words, DOCOMO was one of the first companies in the world to anticipate the market for personal digital assistants, which is now a key arena in the ongoing battle between Google, Apple and Microsoft, which have launched Google Now, Siri and Cortana respectively.

DOCOMO originally positioned its smart life proposition as part of a broader range of cloud services that would enable it to generate new sources of value. Back in 2011, DOCOMO pledged to create:

Figure 2:  The smart life strategy NTT DOCOMO set out in 2011 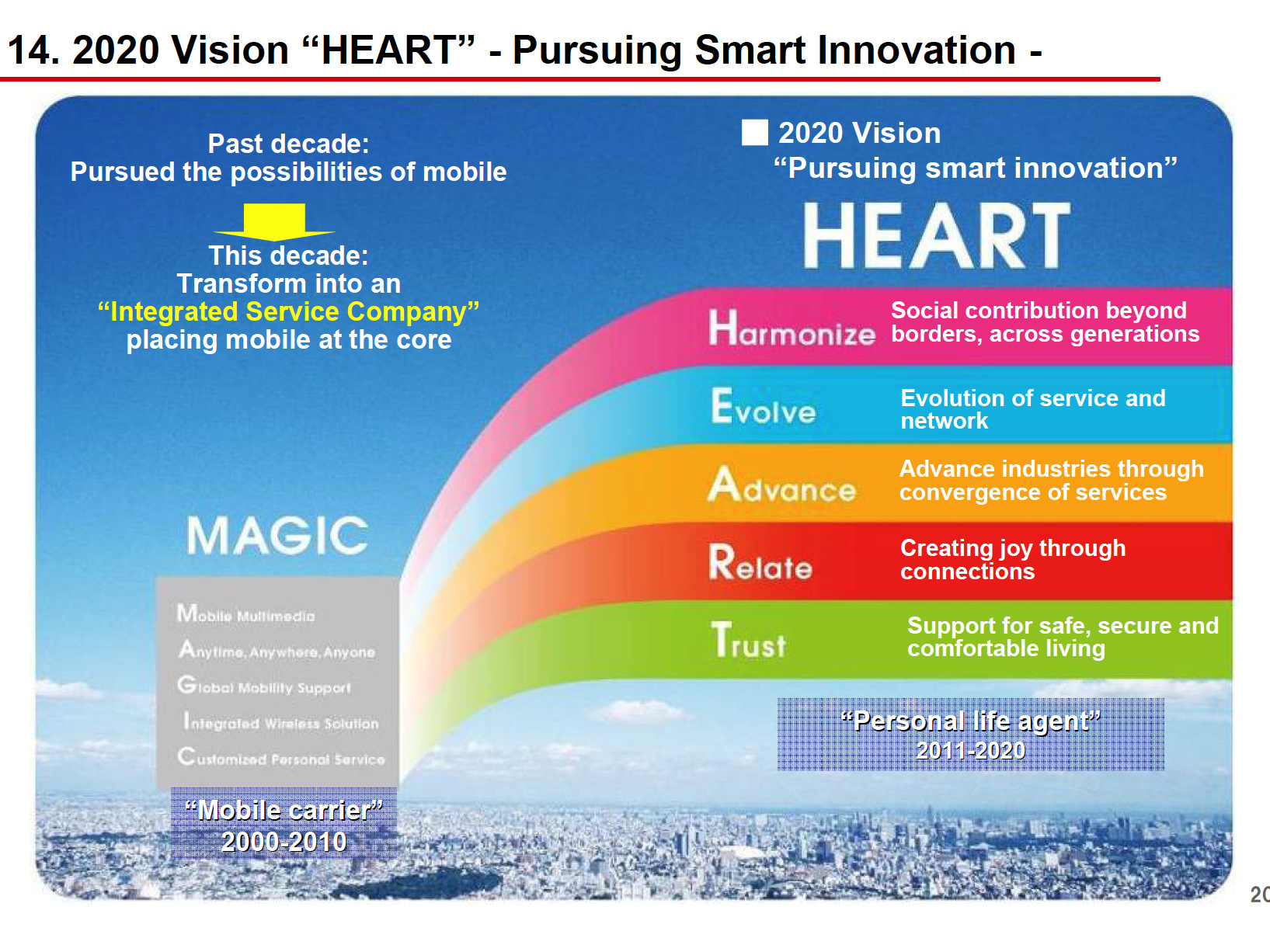 DOCOMO has set about strengthening and expanding its existing digital commerce business to build closer relationships with both consumers and the third party businesses supplying the services and content consumers want. To that end, Japan’s largest telco set itself goals to expand the number of content providers supporting its dmenu portal (a long-standing portal offering original content) from 700 in March 2012 to 3,000 in March 2016, while boosting the number of monthly users of its dmarket, which provides a broader range of digital content, to 20 million by March 2016, up from 1.5 million in March 2012. To that end, DOCOMO has expanded dmarket into new areas, such as fashion, travel and even food deliveries, effectively transforming dmarket in an e-commerce portal, as well as a content portal (see Figure 3).

Figure 3: DOCOMO has significantly expanded the services offered by dmarket 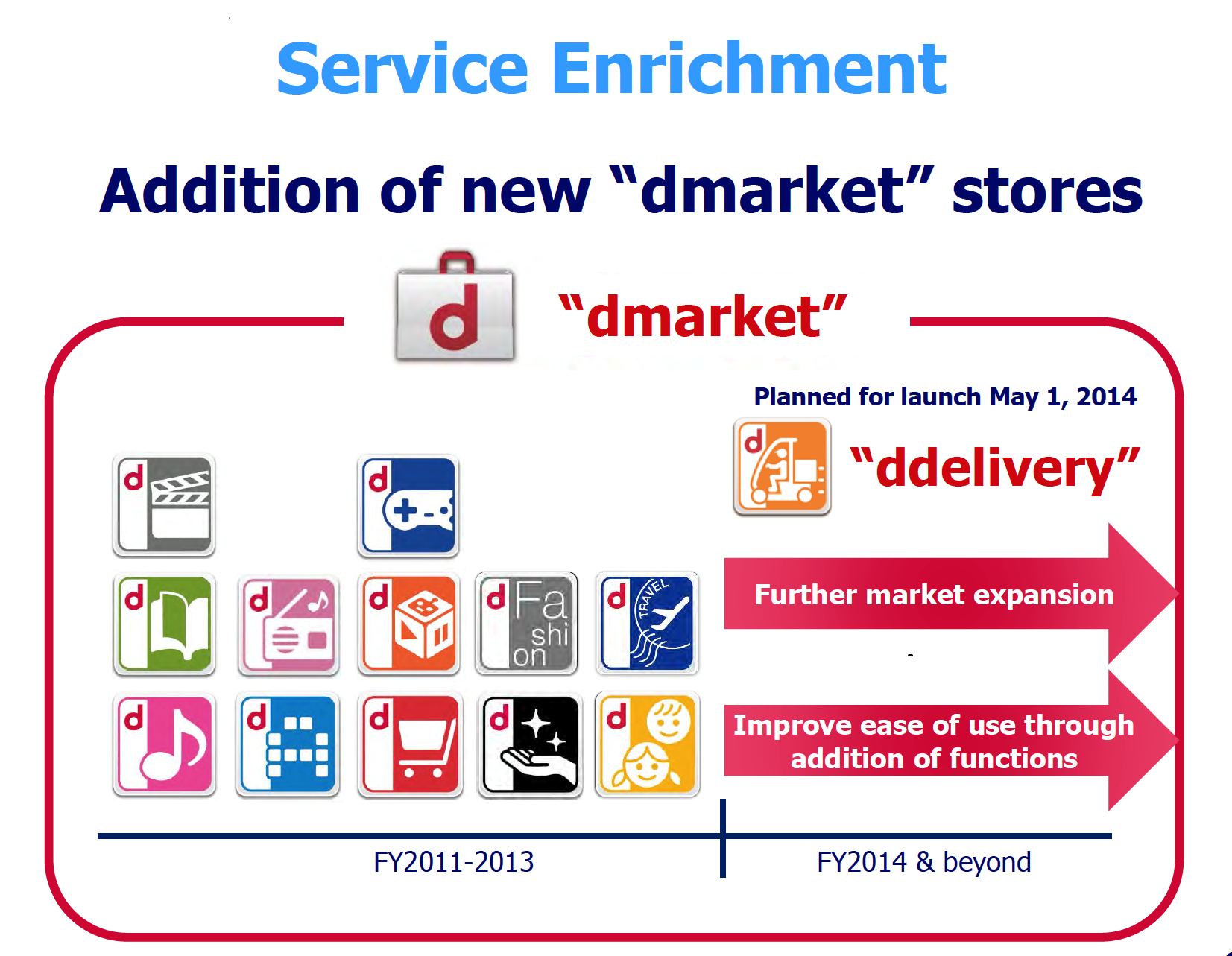 Beyond dmarket, DOCOMO has also deployed a raft of other value added services, encompassing navigation, local information, NFC-based wallet and information services, credit card and carrier-billing-based payments, translation apps, health and wellness services, insurance and even pet and child tracking. DOCOMO also provides an i-concier service, which is designed to help people with daily organisation, as well as delivering offers and information from brands the user is interested in. For example, i-concier can be configured to give you a reminder when you arrive in a specific location. Confusingly, DOCOMO has also rolled out a separate service, called Shabette-Concier, which enables customers to talk Siri-style to “their smartphone about things you want to know or do, and your smartphone will display the best answers to your queries on the screen.” In other words, DOCOMO is offering many similar services and functionality to the major Internet players, such as Apple and Google.

DOCOMO was also quick to realise the importance of enabling individuals to use a single ID across multiple devices, while positioning the smartphone as an authentication platform in everyday life in both the physical world and online world. This kind of persistent identification across multiple devices and networks will help DOCOMO collect the information it needs to make personalised recommendations. At the same time, various DOCOMO services encourage consumers to volunteer information about themselves. DOCOMO also provides secure storage of personal data, an important step towards a personal cloud service (see Figure 4) along the lines of that outlined by STL Partners in the report: Digital Commerce 2.0: New $50bn Disruptive Opportunities for Telcos, Banks and Technology Players. While this approach is broadly similar to that pursued by the major Internet companies, DOCOMO’s marketing places a lot of emphasis on safety, security and peace of mind, implying it is different from the more ‘cavalier’ Internet companies – Google and Facebook’s business models are predicated on encouraging consumers to share personal information, so they tend not to highlight the need for safe and secure storage for that information. 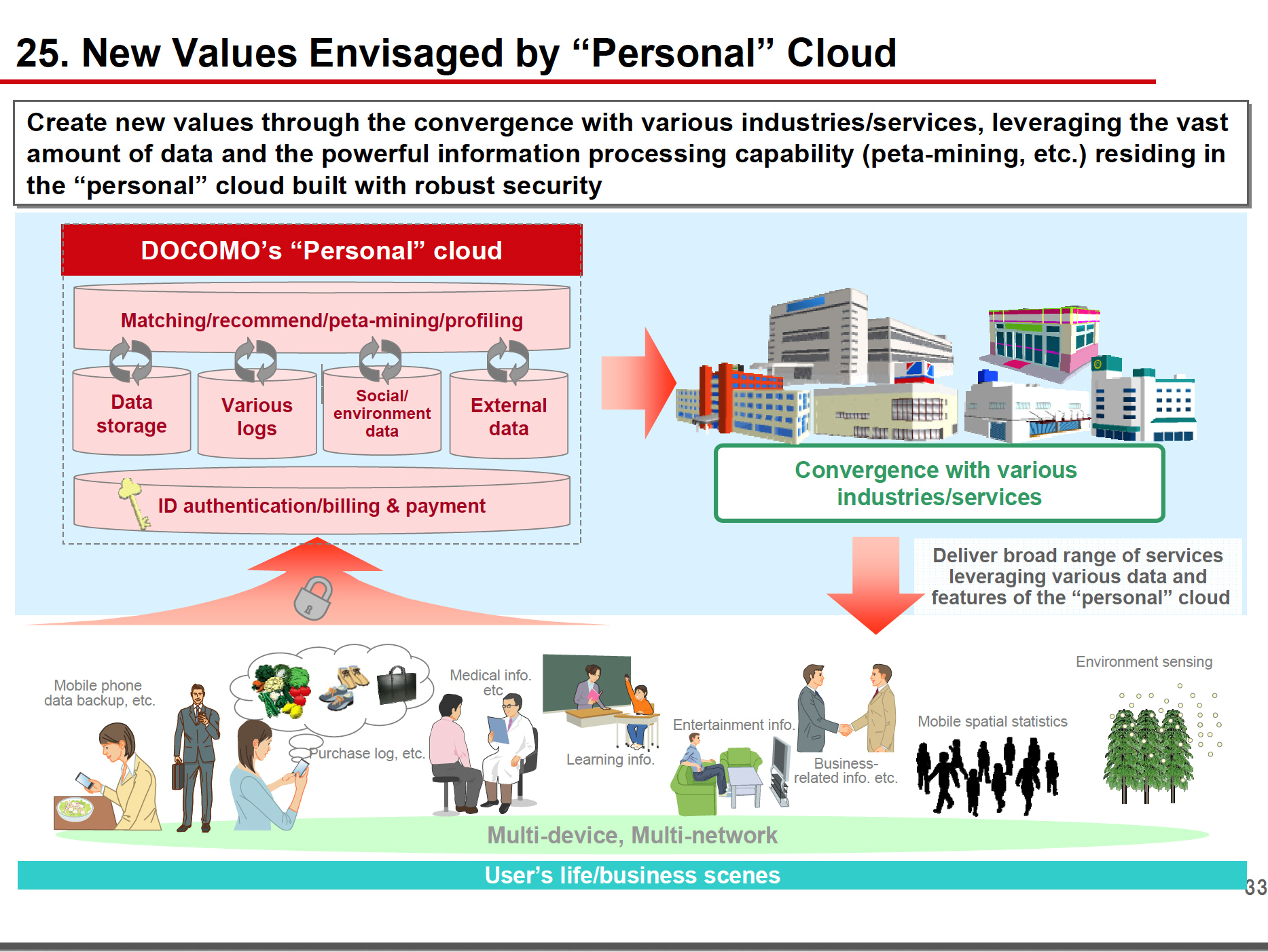