Enthusiasm for creating novel so-called “digital” services is pervasive in the telecoms industry. There is a major shift afoot in the way telcos create, integrate, sell and manage value-added propositions. But how much is enabled by – or dependent on – the network itself? In recent years, most investment has been solely for improved connectivity, but there are signs that future network capex might drive new service opportunities directly, rather than just by empowering 3rd parties.

History: The network is the service

Before looking at how current network investments might drive future generations of telco-delivered services, it is worth considering some of the history, and examining how we got where we are today.

Most obviously, the original network build-outs were synonymous with the services they were designed to support. Both fixed and mobile operators started life as “phone networks”, with analogue or electro-mechanical switches. (Earlier descendants were designed to service telegraph and pagers, respectively). Cable operators began as conduits for analogue TV signals. These evolved to support digital switches of various types, as well as using IP connections internally.

From the 1980s onwards, it was hoped that future generations of telecom services would be enabled by, and delivered from, the network itself – hence acronyms like ISDN (Integrated Services Digital Network) and IN (Intelligent Network).

But the earliest signs that “digital services” might come from outside the telecom network were evident even at that point. Large companies built up private networks to support their own phone systems (PBXs). Various 3rd-party “value-added networks” (VAN) and “electronic data interchange” (EDI) services emerged in industries such as the automotive sector, finance and airlines. And from the early 1990s, consumers started to get access to bulletin boards and early online services like AOL and CompuServe, accessed using dial-up modems.

And then, around 1994, the first web browsers were introduced, and the model of Internet access and ISPs took off, initially with narrowband connections using modems, but then swiftly evolving to ADSL-based broadband. From 1990 onwards, the bulk of new consumer “digital services” were web-based, or using other Internet protocols such as email and private messaging. At the same time, businesses evolved their own private data networks (using telco “pipes” such as leased-lines, frame-relay and the like), supporting their growing client/server computing and networked-application needs.

Figure 1: In recent years, most digital services have been “non-network” based 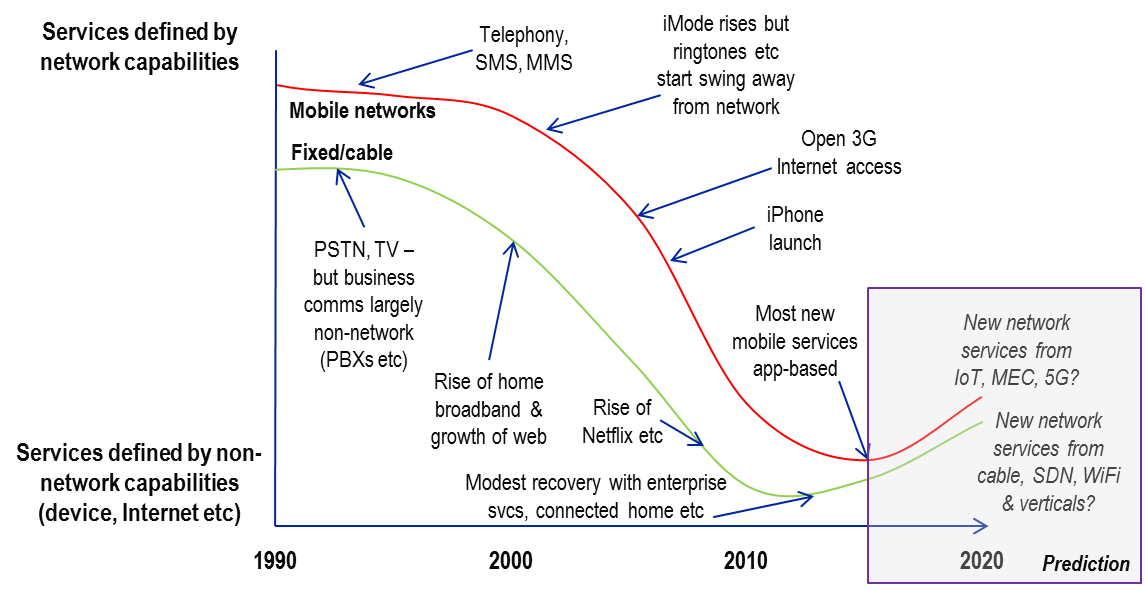 For fixed broadband, Internet access and corporate data connections have mostly dominated ever since, with rare exceptions such as Centrex phone and web-hosting services for businesses, or alarm-monitoring for consumers. The first VoIP-based carrier telephony service only emerged in 2003, and uptake has been slow and patchy – there is still a dominance of old, circuit-based fixed phone connections in many countries.

More recently, a few more “fixed network-integrated” offers have evolved – cloud platforms for businesses’ voice, UC and SaaS applications, content delivery networks, and assorted consumer-oriented entertainment/IPTV platforms. And in the last couple of years, operators have started to use their broadband access for a wider array of offers such as home-automation, or “on-boarding” Internet content sources into set-top box platforms.

The mobile world started evolving later – mainstream cellular adoption only really started around 1995. In the mobile world, most services prior to 2005 were either integrated directly into the network (e.g. telephony, SMS, MMS) or provided by operators through dedicated service delivery platforms (e.g. DoCoMo iMode, and Verizon’s BREW store). Some early digital services such as custom ringtones were available via 3rd-party channels, but even they were typically charged and delivered via SMS. The “mobile Internet” between 1999-2004 was delivered via specialised WAP gateways and servers, implemented in carrier networks. The huge 3G spectrum licence awards around 2000-2002 were made on the assumption that telcos would continue to act as creators or gatekeepers for the majority of mobile-delivered services.

It was only around 2005-6 that “full Internet access” started to become available for mobile users, both for those with early smartphones such as Nokia/Symbian devices, and via (quite expensive) external modems for laptops. In 2007 we saw two game-changers emerge – the first-generation Apple iPhone, and Huawei’s USB 3G modem. Both catalysed the wide adoption of the consumer “data plan”- hitherto almost unknown. By 2010, there were virtually no new network-based services, while the “app economy” and “vanilla” Internet access started to dominate mobile users’ behaviour and spending. Even non-Internet mobile services such as BlackBerry BES were offered via alternative non-telco infrastructure. 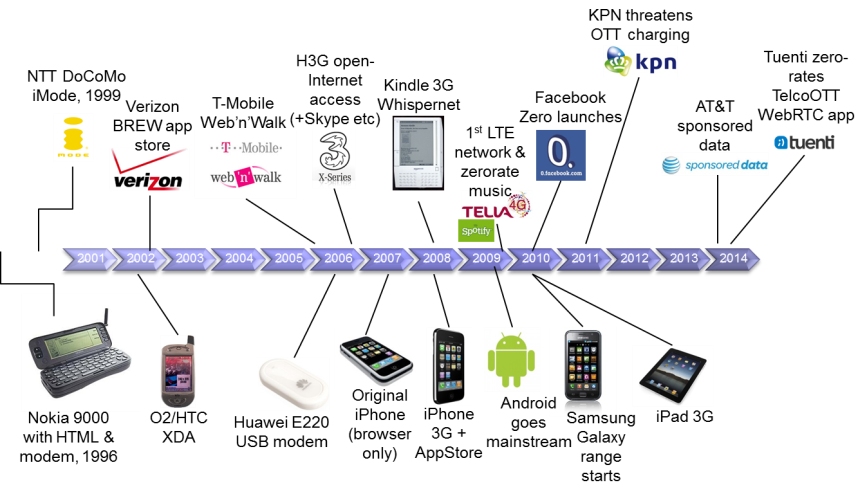 By 2013, there had still been very few successful mobile digital-services offers that were actually anchored in cellular operators’ infrastructure. There have been a few positive signs in the M2M sphere and wholesaled SMS APIs, but other integrated propositions such as mobile network-based TV have largely failed. Once again the transition to IP-based carrier telephony has been slow – VoLTE is gaining grudging acceptance more from necessity than desire, while “official” telco messaging services like RCS have been abject failures. Neither can be described as “digital innovation”, either – there is little new in them.

The last two years, however, have seen the emergence of some “green shoots” for mobile services. Some new partnering / charging models have borne fruit, with zero-rated content/apps becoming quite prevalent, and a handful of developer platforms finally starting to gain traction, offering network-based features such as location awareness. Various M2M sectors such as automotive connectivity and some smart-metering has evolved. But the bulk of mobile “digital services” have been geared around iOS and Android apps, anchored in the cloud, rather than telcos’ networks.

So in 2015, we are currently in a situation where the majority of “cool” or “corporate” services in both mobile and fixed worlds owe little to “the network” beyond fast IP connectivity: the feared mythical (and factually-incorrect) “dumb pipe”. Connected “general-purpose” devices like PCs and smartphones are optimised for service delivery via the web and mobile apps. Broadband-connected TVs are partly used for operator-provided IPTV, but also for so-called “OTT” services such as Netflix.

And future networks and novel services? As discussed below, there are some positive signs stemming from virtualisation and some new organisational trends at operators to encourage innovative services – but it is not yet clear that they will be enough to overcome the open Internet’s sustained momentum.

What are so-called “digital services”?

It is impossible to visit a telecoms conference, or read a vendor press-release, without being bombarded by the word “digital” in a telecom context. Digital services, digital platforms, digital partnerships, digital agencies, digital processes, digital transformation – and so on.

It seems that despite the first digital telephone exchanges being installed in the 1980s and digital computing being de-rigeur since the 1950s, the telecoms industry’s marketing people have decided that 2015 is when the transition really occurs. But when the chaff is stripped away, what does it really mean, especially in the context of service innovation and the network?

Often, it seems that “digital” is just a convenient cover, to avoid admitting that a lot of services are based on the Internet and provided over generic data connections. But there is more to it than that. Some “digital services” are distinctly non-Internet in nature (for example, if delivered “on-net” from set-top boxes). New IoT and M2M propositions may never involve any interaction with the web as we know it. Hybrids where apps use some telco network-delivered ingredients (via APIs), such as identity or one-time SMS passwords are becoming important.

And in other instances the “digital” phrases relate to relatively normal services – but deployed and managed in a much more efficient and automated fashion. This is quite important, as a lot of older services still rely on “analogue” processes – manual configuration, physical “truck rolls” to install and commission, and high “touch” from sales or technical support people to sell and operate, rather than self-provisioning and self-care through a web portal. Here, the correct term is perhaps “digital transformation” (or even more prosaically simply “automation”), representing a mix of updated IP-based networks, and more modern and flexible OSS/BSS systems to drive and bill them.

STL identifies three separate mechanisms by which network investments can impact creation and delivery of services:

While the future will involve a broader set of content/application revenue streams for telcos, it will also need to support more, faster and differentiated types of data connections. Top of the “opportunity list” is the support for “Connected Everything” – the so-called Internet of Things, smart homes, connected cars, mobile healthcare and so on. Many of these will not involve connection via the “public Internet” and therefore there is a possibility for new forms of connectivity proposition or business model – faster- or lower-powered networks, or perhaps even the much-discussed but rarely-seen monetisation of “QoS” (Quality of Service). Even if not paid for directly, QoS could perhaps be integrated into compelling packages and data-service bundles.

There is also the potential for more “in-network” value to be added through SDN and NFV – for example, via distributed servers close to the edge of the network and “orchestrated” appropriately by the operator. (We covered this area in depth in the recent Telco 2.0 brief on Mobile Edge Computing How 5G is Disrupting Cloud and Network Strategy Today.)

In other words, virtualisation and the “software network” might allow truly new services, not just providing existing services more easily. That said, even if the answer is that the network could make a large-enough difference, there are still many extra questions about timelines, technology choices, business models, competitive and regulatory dynamics – and the practicalities and risks of making it happen.

Part of the complexity is that many of these putative new services will face additional sources of competition and/or substitution by other means. A designer of a new communications service or application has many choices about how to turn the concept into reality. Basing network investments on specific predictions of narrow services has a huge amount of risk, unless they are agreed clearly upfront.

But there is also another latent truth here: without ever-better (and more efficient) networks, the telecom industry is going to get further squeezed anyway. The network part of telcos needs to run just to stand still. Consumers will adopt more and faster devices, better cameras and displays, and expect network performance to keep up with their 4K videos and real-time games, without paying more. Businesses and governments will look to manage their networking and communications costs – and may get access to dark fibre or spectrum to build their own networks, if commercial services don’t continue to improve in terms of price-performance. New connectivity options are springing up too, from WiFi to drones to device-to-device connections.

In other words: some network investment will be “table stakes” for telcos, irrespective of any new digital services. In many senses, the new propositions are “upside” rather than the fundamental basis justifying capex.