It’s reasonably clear that standard cellular networks will only carry a fraction of the data of the Internet of Things (IoT), but how should telcos be involved in the fast growing range of low cost, disruptive networks that will carry the bulk? We examine the alternatives and outline strategic options.

5G, WiFi, GPRS, NB-IoT, LTE-M & LTE Categories 1 & 0, SigFox, Bluetooth, LoRa, Weightless-N & Weightless-P, ZigBee, EC-GSM, Ingenu, Z-Wave, Nwave, various satellite standards, optical/laser connections and more….. the list of current or proposed wireless network technologies for the “Internet of Things” seems to be growing longer by the day. Some are long-range, some short. Some high power/bandwidth, some low. Some are standardised, some proprietary. And while most devices will have some form of wireless connection, there are certain categories that will use fibre or other fixed-network interfaces.

There is no “one-size fits all”, although some hope that 5G will ultimately become an “umbrella” for many of them, in the 2020 time-frame and beyond. But telcos, especially mobile operators, need to consider which they will support in the shorter-term horizon, and for which M2M/IoT use-cases. That universe is itself expanding too, with new IoT products and systems being conceived daily, spanning everything from hobbyists’ drones to industrial robots. All require some sort of connectivity, but the range of costs, data capabilities and robustness varies hugely.

This report specifically covers IoT-centric network connectivity. It fits into Telco 2.0’s Future of the Network research stream, and also intersects with our other ongoing work on IoT/M2M applications, including verticals such as the connected car, connected home and smart cities. It focuses primarily on new network types, rather than marketing/bundling approaches for existing services.

In the 9 months since that report was published, a number of important trends have occurred in the M2M / IoT space:

Connectivity in the wider M2M/IoT context

It is not always clear what the difference is between M2M and IoT, especially at a connectivity level. They now tend to be used synonymously, although the latter is definitely newer and “cooler”. Various vendors have their own spin on this – Cisco’s “Internet of Everything”, and Ericsson’s “Networked Society”, for example. It is also a little unclear where the IoT part ends, and the equally vague term “networked services” begins. It is also important to recognise that a sizeable part of the future IoT technology universe will not be based on “services” at all, although “user-owned” devices and systems are much harder for telcos to monetise.

An example might be a government encouraging adoption of electric vehicles. Cars and charging points are “things” which require data connections. At one level, an IoT application may simply guide drivers to their closest available power-source, but a higher-level “societal” application will collate data from both the IoT network and other sources. Thus data might also flow from bus and train networks, as well as traffic sensors, pollution monitors and even fitness trackers for walking and cycling, to see overall shifts in transport habits and help “nudge” commuters’ behaviour through pricing or other measures. In that context, the precise networks used to connect to the end-points become obscured in the other layers of software and service – although they remain essential building blocks.

Figure 3: Characterising the difference between M2M and IoT across six domains 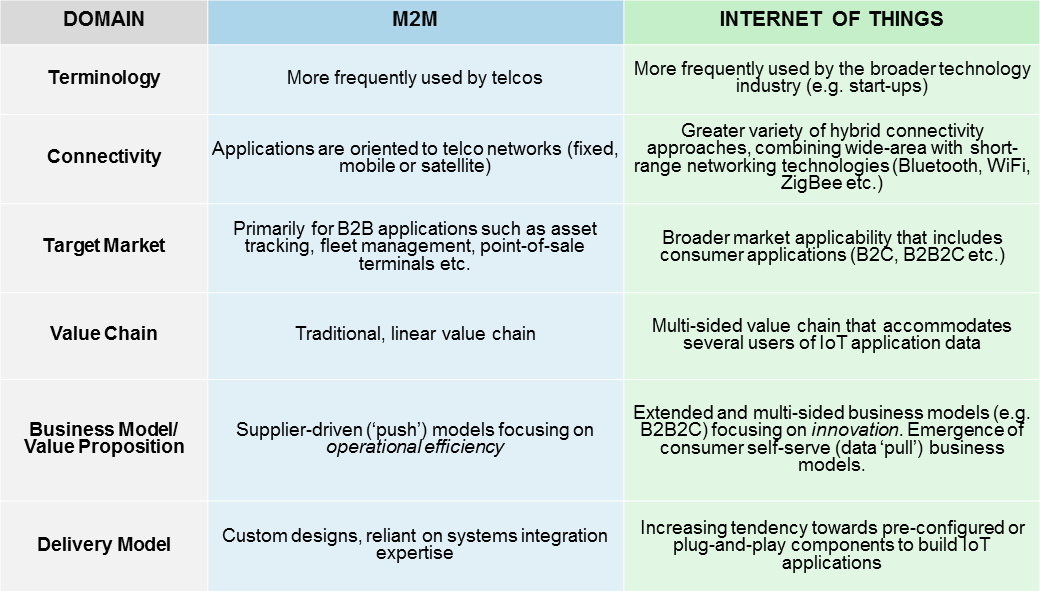 (Note: the Future of Network research stream generally avoids using vague and loaded terms like “digital” and “OTT”. While concise, we believe they are often used in ways that guide readers’ thinking in wrong or unhelpful directions. Words and analogies are important: they can lead or mislead, often sub-consciously).

Often, it seems that the word “digital” is just a convenient cover, to avoid admitting that a lot of services are based on the Internet and provided over generic data connections. But there is more to it than that. Some “digital services” are distinctly non-Internet in nature (for example, if delivered “on-net” from set-top boxes). New IoT and M2M propositions may never involve any interaction with the web as we know it. Some may actually involve analogue technology as well as digital. Hybrids where apps use some telco network-delivered ingredients (via APIs), such as identity or one-time SMS passwords are becoming important. 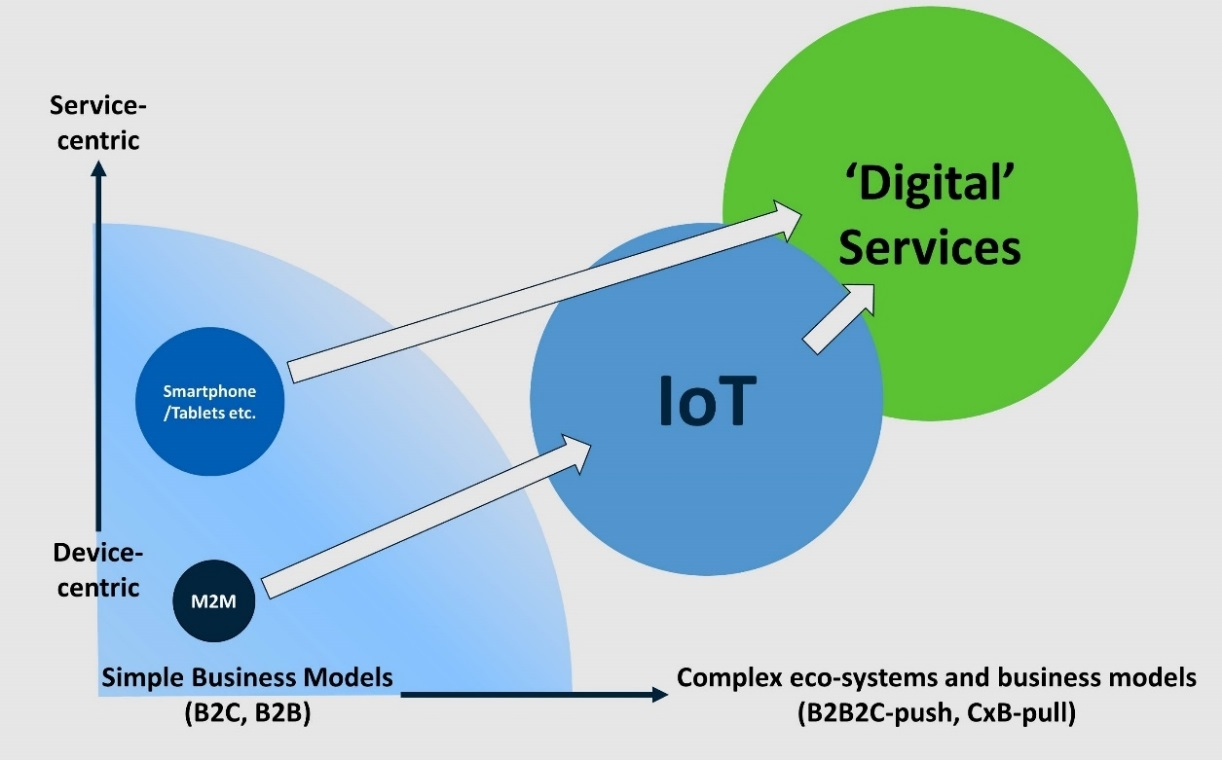 We will also likely see many hybrid solutions emerging, for example where dedicated devices are combined with smartphones/PCs for particular functions. Thus a “digital home” service may link alarms, heating sensors, power meters and other connections via a central hub/console – but also send alerts and data to a smartphone app. It is already quite common for consumer/business drones to be controlled via a smartphone or tablet.

In terms of connectivity, it is also worth noting that “M2M” generally just refers to the use of conventional cellular modems and networks – especially 2G/3G. IoT expands this considerably – as well as future 5G networks and technologies being specifically designed with new use-cases in mind, we are also seeing the emergence of a huge range of dedicated 4G variants, plus new purpose-designed LPWAN platforms. IoT also intersects with the growing range of local/capillary[1] network technologies – which are often overlooked in conventional discussions about M2M. 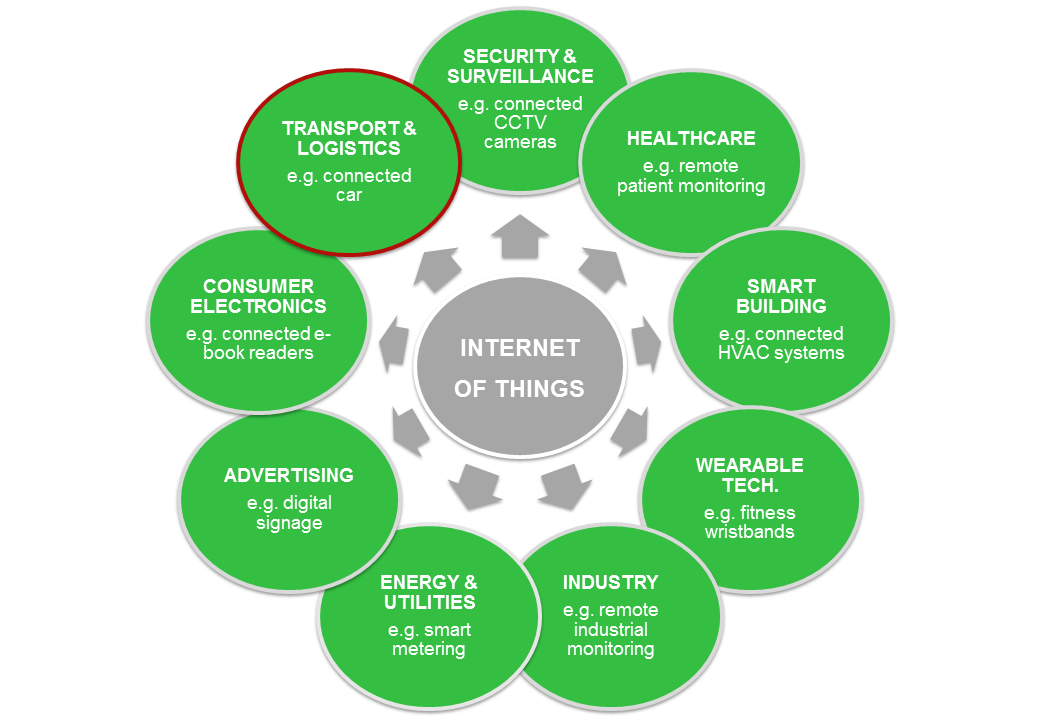 The larger the number…

…the less relevance and meaning it has. We often hear of an emerging world of 20bn, 50bn, even trillions of devices being “networked”. While making for good headlines and press-releases, such numbers can be distracting.

While we will definitely be living in a transformed world, with electronics around us all the time – sensors, displays, microphones and so on – that does not easily translate into opportunities for telecom operators. The correct role for such data and forecasts is in the context of a particular addressable opportunity – otherwise one risks counting toasters, alongside sensors in nuclear power stations. As such, this report does not attempt to compete in counting “things” with other analyst firms, although references are made to approximate volumes.

For example, consider a typical large, modern building. It’s common to have temperature sensors, CCTV cameras, alarms for fire and intrusion, access control, ventilation, elevators and so forth. There will be an internal phone system, probably LAN ports at desks and WiFi throughout. In future it may have environmental sensors, smart electricity systems, charging points for electric vehicles, digital advertising boards and more. Yet the main impact on the telecom industry is just a larger Internet connection, and perhaps some dedicated lines for safety-critical systems like the fire alarm. There may well be 1,000 or 10,000 connected “things”, and yet for a cellular operator the building is more likely to be a future driver of cost (e.g. for in-building radio coverage for occupants’ phones) rather than extra IoT revenue. Few of the building’s new “things” will have SIM cards and service-based radio connections in any case – most will link into the fixed infrastructure in some way.

One also has to doubt some of the predicted numbers – there is considerable vagueness and hand-waving inherent in the forecasts. If a car in 2020 has 10 smart sub-systems, and 100 sensors reporting data, does that count as 1, 10 or 100 “things” connected? Is the key criterion that smart appliances in a connected home are bought individually – and therefore might be equipped with individual wide-area network connections? When such data points are then multiplied-up to give traffic forecasts, there are multiple layers of possible mathematical error.

This highlights the IoT quantification dilemma – everyone focuses on the big numbers, many of which are simple spreadsheet extrapolations, made without much consideration of the individual use-cases. And the larger the headline number, the less-likely the individual end-points will be directly addressed by telcos.