This report provides detailed analysis of the IoT ecosystem, the technologies enabling it, and how telcos can establish themselves within it, by presenting case-studies of strategies from AT&T, Vodafone, SK Telecom, and Deutsche Telekom. The report also discusses the connectivity needs of several different IoT use-cases.

The term IoT is used to describe a broad and diverse ecosystem that includes a wide range of different connectivity types and use-cases. Therefore, it is not helpful to discuss the IoT ecosystem as a whole, and to understand IoT better it is necessary to break it down into horizontal layers and vertical segments. 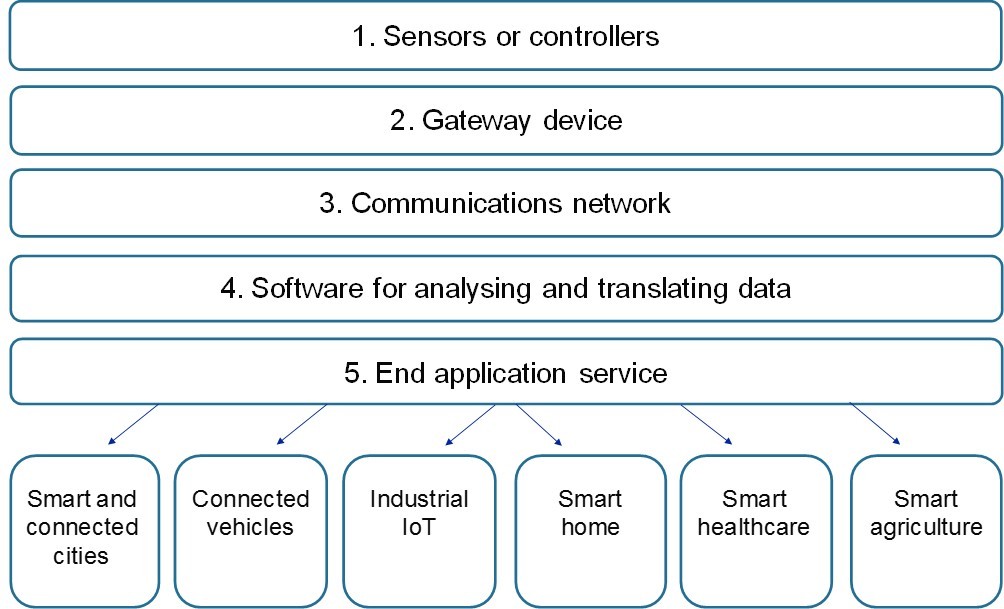 The five horizontal layers in the figure above are essential elements common to all IoT use-cases, regardless of vertical segment, and comprise:

Level 5 – the end application service – is where material differences exist between vertical segments. Because IoT is a young market new use-cases are still emerging and existing use-cases are still evolving. The IoT ecosystem is not static and will continue to change, grow, and develop, and could look quite different in the next ten years. However, several distinct IoT vertical markets – sometimes described as ecosystems in their own right – are already emerging. These include:

Within each of these six verticals there are several use-cases, and each vertical is developing and evolving new ones all the time. Figure 2 shows examples of use-cases either currently in use or under development in each vertical.

The complexity and technical requirements of each use-case varies widely. For example, the requirements of a smart thermostat compared to those of an autonomous vehicle are distinctly different. The next section of this report will provide an overview of the different technologies enabling IoT, followed by a section providing analysis of the technological requirements of several use-cases to illustrate how the IoT ecosystem will be enabled by not just one, but several different connectivity technologies.