This article is part of: Network Futures, Telco Cloud

What is the open RAN and why does it matter?

‘The open RAN’ encompasses a group of technological approaches that are designed to make the radio access network (RAN) more cost effective and flexible. It involves a shift away from traditional, proprietary radio hardware and network architectures, driven by single vendors, towards new, virtualised platforms and a more open vendor ecosystem.

The traditional, legacy radio access network (RAN) uses dedicated hardware to deliver the baseband function (modulation and management of the frequency range used for cellular network transmission), along with proprietary interfaces (typically based on the Common Public Radio Interface (CPRI) standard) for the fronthaul from the baseband unit (BBU) to the remote radio unit (RRU) at the top of the transmitter mast.

This means that, typically, telcos have needed to buy the baseband and the radio from a single vendor, with the market presently dominated largely by the ‘big three’ (Ericsson, Huawei and Nokia), together with a smaller market share for Samsung and ZTE.

The architecture of the legacy RAN – with BBUs typically but not always at every cell site – has many limitations:

Moving to the open RAN: C-RAN, vRAN and open-RAN

This enables more effective control and programming of capacity, latency, spectrum usage and service quality, including in support of 5G core-enabled technologies and services such as network slicing, URLLC, etc. In particular, baseband functionality can be split between more centralised sites (central baseband units – CU) and more distributed sites (distributed unit – DU) in much the same way, and for a similar purpose, as the split between centralised control planes and distributed user planes in the mobile core, as illustrated below:

Open-RAN – note the hyphenation – involves replacing the vendor-proprietary interfaces between the BBU and the RRU with open standards. This enables BBUs (and parts thereof) from one or multiple vendors to interoperate with radios from other vendors, resulting in a fully disaggregated RAN:

You will have noticed that the technologies above have similar-sounding names and overlapping definitions. To add to potential confusion, they are often deployed together.

Figure 5: The open RAN Venn – How C-RAN, vRAN and open-RAN fit together 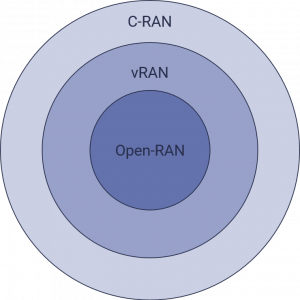 To help eliminate ambiguity we are adopting the typographical convention ‘open-RAN’ to convey the narrower meaning: disaggregation of the BBU and RRU facilitated by open interfaces. Similarly, where we are dealing with deployments or architectures that involve vRAN and / or cloud RAN but not open-RAN in the narrower sense, we refer to those examples as ‘vRAN’ or ‘C-RAN’ as appropriate.

In the coming pages, we will investigate why open RAN matters, what telcos are doing about it – and what they should do next.