This article is part of: Growing Enterprise Revenues, Telco Cloud

NFV (Network Functions Virtualisation) potentially offers operators benefits of up to 80% network opex reduction and significant improvements in agility, and threatens a shake-up of the vendor landscape. What are the challenges to making it happen, and what do telcos and vendors need to do to succeed?

What’s the fuss about NFV?

Today, it seems that suddenly everything has become virtual: there are virtual machines, virtual LANs, virtual networks, virtual network interfaces, virtual switches, virtual routers and virtual functions. The two most recent and highly visible developments in Network Virtualisation are Software Defined Networking (SDN) and Network Functions Virtualisation (NFV). They are often used in the same breath, and are related but different.

Software Defined Networking has been around as a concept since 2008, has seen initial deployments in Data Centres as a Local Area Networking technology and according to early adopters such as Google, SDNs have helped to achieve better utilisation of data centre operations and of Data Centre Wide Area Networks. Urs Hoelzle of Google can be seen discussing Google’s deployment and findings here at the OpenNet summit in early 2012 and Google claim to be able to get 60% to 70% better utilisation out of their Data Centre WAN. Given the cost of deploying and maintaining service provider networks this could represent significant cost savings if service providers can replicate these results.

NFV – Network Functions Virtualisation – is just over two years old and yet it is already being deployed in service provider networks and has had a major impact on the networking vendor landscape. Globally the telecoms and datacomms equipment market is worth over $180bn and has been dominated by 5 vendors with around 50% of the market split between them.

Innovation and competition in the networking market has been lacking with very few major innovations in the last 12 years, the industry has focussed on capacity and speed rather than anything radically new, and start-ups that do come up with something interesting get quickly swallowed up by the established vendors. NFV has started to rock the steady ship by bringing the same technologies that revolutionised the IT computing markets, namely cloud computing, low cost off the shelf hardware, open source and virtualisation to the networking market.

Conventionally, networks have been built using devices that make autonomous decisions about how the network operates and how traffic flows. SDN offers new, more flexible and efficient ways to design, test, build and operate IP networks by separating the intelligence from the networking device and placing it in a single controller with a perspective of the entire network. Taking the ‘intelligence’ out of many individual components also means that it is possible to build and buy those components for less, thus reducing some costs in the network. Building on ‘Open’ standards should make it possible to select best in class vendors for different components in the network introducing innovation and competiveness.

SDN started out as a data centre technology aimed at making life easier for operators and designers to build and operate large scale data centre operations. However, it has moved into the Wide Area Network and as we shall see, it is already being deployed by telcos and service providers.

Like SDN, NFV splits the control functions from the data forwarding functions, however while SDN does this for an entire network of things, NFV focusses specifically on network functions like routing, firewalls, load balancing, CPE etc. and looks to leverage developments in Common Off The Shelf (COTS) hardware such as generic server platforms utilising multi core CPUs.

The performance of a device like a router is critical to the overall performance of a network. Historically the only way to get this performance was to develop custom Integrated Circuits (ICs) such as Application Specific Integrated Circuits (ASICs) and build these into a device along with some intelligence to handle things like route acquisition, human interfaces and management. While off the shelf processors were good enough to handle the control plane of a device (route acquisition, human interface etc.), they typically did not have the ability to process data packets fast enough to build a viable device.

But things have moved on rapidly. Vendors like Intel have put specific focus on improving the data plane performance of COTS based devices and the performance of the devices has risen exponentially. Figure 1 clearly demonstrates that in just 3 years (2010 – 2013) a tenfold increase in packet processing or data plane performance has been achieved. Generally, CPU performance has been tracking Moore’s law which originally stated that the number of components in an integrated circuit would double very two years. If the number of components are related to performance, the same can be said about CPU performance. For example Intel will ship its latest processor family in the second half of 2015 which could have up to 72 individual CPU cores compared to the four or 6 used in 2010/2013. 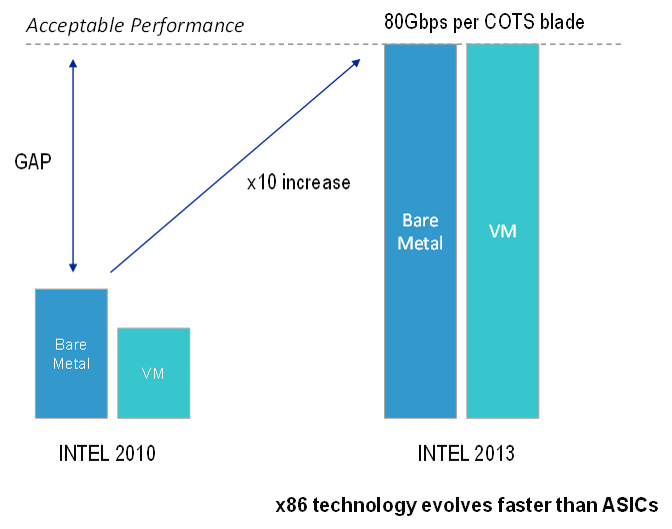 NFV was started by the telco industry to leverage the capability of COTS based devices to reduce the cost or networking equipment and more importantly to introduce innovation and more competition to the networking market.

Since its inception in 2012 and running as a special interest group within ETSI (European Telecommunications Standards Institute), NFV has proven to be a valuable initiative, not just from a cost perspective, but more importantly with what it means to telcos and service providers in being able to develop, test and launch new services quickly and efficiently.

ETSI set up a number of work streams to tackle the issues of performance, management & orchestration, proof of concept, reference architecture etc. and externally organisations like OPNFV (Open Platform for NFV) have brought together a number of vendors and interested parties.

Why do we need NFV? What we already have works!

NFV came into being to solve a number of problems. Dedicated appliances from the big networking vendors typically do one thing and do that thing very well, switching or routing packets, acting as a network firewall etc. But as each is dedicated to a particular task and has its own user interface, things can get a little complicated when there are hundreds of different devices to manage and staff to keep trained and updated. Devices also tend to be used for one specific application and reuse is sometimes difficult resulting in expensive obsolescence. By running network functions on a COTS based platform most of these issues go away resulting in:

And the real benefits are not just in the area of cost savings, they are all about time to market, being able to respond quickly to market demands and in essence becoming more agile.

If the real benefits of NFV are not just about cost savings and are about agility, how is this delivered? Agility comes from a number of different aspects, for example the ability to orchestrate a number of VNFs and the network to deliver a suite or chain of network functions for an individual user or application. This has been the focus of the ETSI Management and Orchestration (MANO) workstream.

MANO will be crucial to the long term success of NFV. MANO provides automation and provisioning and will interface with existing provisioning and billing platforms such as existing OSS/BSS. MANO will allow the use and reuse of VNFs, networking objects, chains of services and via external APIs allow applications to request and control the creation of specific services.

Figure 2 shows a hypothetical service chain created for a residential user accessing a network server. The service chain is made up of a number of VNFs that are used as required and then discarded when not needed as part of the service. For example the Broadband Remote Access Server becomes a VNF running on a common platform rather than a dedicated hardware appliance. As the users STB connects to the network, the authentication component checks that the user is valid and has a current account, but drops out of the chain once this function has been performed. The firewall is used for the duration of the connection and other components are used as required for example Deep Packet Inspection and load balancing. Equally as the user accesses other services such as media, Internet and voice services different VNFs can be brought into play such as SBC and Network Storage.

Sounds great, but is it real, is anyone doing anything useful?

The short answer is yes, there are live deployments of NFV in many service provider networks and NFV is having a real impact on costs and time to market detailed in this report. For example: