Amazon provides telecoms operators with a playbook on how to combine physical and digital assets into a compelling customer proposition. This 40 page report discusses how telcos can learn from and partner with Amazon.

Telcos can learn from Amazon

This executive briefing explores how and why Amazon is expanding its physical footprint in its home market of North America. Although Amazon was born on the Internet, physical assets from lockers and retail stores to fulfilment centres and airplanes are absolutely fundamental to its mission to provide the most convenient means of accessing as many physical and digital products and services as possible.

Flagging the many parallels with telecoms, this report analyses the way in which Amazon is melding its physical and digital propositions to generate as many economies of scale and economies of scope as possible. For each example, the report considers the potential lessons for telcos.

This report gives a high level overview of how telcos could do much more with their remaining data centres, their core and access networks, their retail stores, vehicle fleets, devices and apps. Indeed, each of these assets could help telcos to secure a major role in the Coordination Age – a new era in which telcos and their partners could move beyond providing connectivity to help the public and private sector better coordinate the use of key resources and assets, such as road space, fresh water, energy and farm land.

Finally, the report also flags the potential for telcos outside of North America to partner with Amazon. Beyond its home market, Amazon still has little in the way of physical assets, whereas telcos in Europe and Asia have large physical footprints that could be better utilised.

Note, this high-level report will be supplemented by future reports that will analyse in-depth how telcos can make better use of each category of asset, as STL Partners did in this report exploring best practice in the rollout of apps: Telcos’ apps: What works?

As telcos explore new opportunities emerging in the Coordination Age, they could learn a lot from Amazon, a company that has mastered the coordination of complex digital and physical supply chains. Born on the Internet, Amazon is associated in most people’s minds with the rise of online shopping – buying goods with a click of a button from the comfort of your armchair. Although one might assume that Amazon keeps costs down by minimising its capital spending and its physical footprint, its approach is far more nuanced than that. Indeed, Amazon is building out a broad physical presence across North America that belies the notion that success in digital commerce is all about data, algorithms and slick software. Despite its relentless pursuit of automation, Amazon employs approximately 647,500 full-time and part-time staff, most of them working in fulfilment centres and other logistical facilities.

Rather than minimising costs, Amazon is looking to maximise convenience. Indeed, Amazon is gradually increasing its spending on fulfilment, which has climbed from 13% of sales in 2016 to 14% in 2017 and 15% in 2018.

One of the ways in which Amazon is increasing convenience for customers is by reducing the latency in its distribution network – it is building out an increasingly dense network of physical assets to reduce delivery times, so that consumers regard Amazon as first port of call for an even wider range of products and services. Amazon wants to sell people what they want, exactly when they want it. For Amazon, as with telcos, high quality coverage of major population centres is vital.

To that end, Amazon is building up a major physical presence in North America – its home market. Amazon’s balance sheet now shows US$45 billion of property and equipment in the U.S. with a further US$16.7 billion in the rest of the world. That compares with US$27.5 billion of property and equipment on the balance sheet of Target Corp., a retailer with more than 1,800 stores across the U.S. Figure 2 shows the value of the property and equipment assets in Amazon’s North America division is growing far faster than those in its International division. That suggests Amazon can’t afford to pursue an asset-heavy strategy across the world and could be open to partnerships with telcos with data centres, retail stores and phone boxes in markets beyond North America.

As Figure 2 shows, the physical footprint of Amazon Web Services is also growing rapidly, underlining Amazon’s relentless expansion in online entertainment and cloud computing, as well as retail and logistics (see Figure 3). Indeed, Amazon is highly active in the six distinct market segments shown in Figure 3, underlining how Amazon is comfortable handling a vast range of physical goods and digital bits and bytes. It also operates its own network infrastructure, including undersea cables, and wind farms.

Figure 3 might suggest Amazon is a conglomerate, but it has integrated its propositions across multiple markets in a way that traditional conglomerates wouldn’t contemplate, building extraordinary synergies across six distinct markets over the past 20 years.

Amazon has built these synergies by moving fluidly between B2B2C propositions, B2B propositions and B2C propositions. Amazon is both a retailer and a marketplace for physical goods, and a supplier of cloud services and apps to both consumers and businesses.  As a result, it sometimes competes directly with is customers, but in a way that its customers seem to accept. Most famously, Amazon competes with Netflix in the video-on-demand market, while hosting Netflix on Amazon Web Services (telcos do something similar by serving third party MVNOs).

Figure 3: The milestones of Amazon’s expansion across six segments 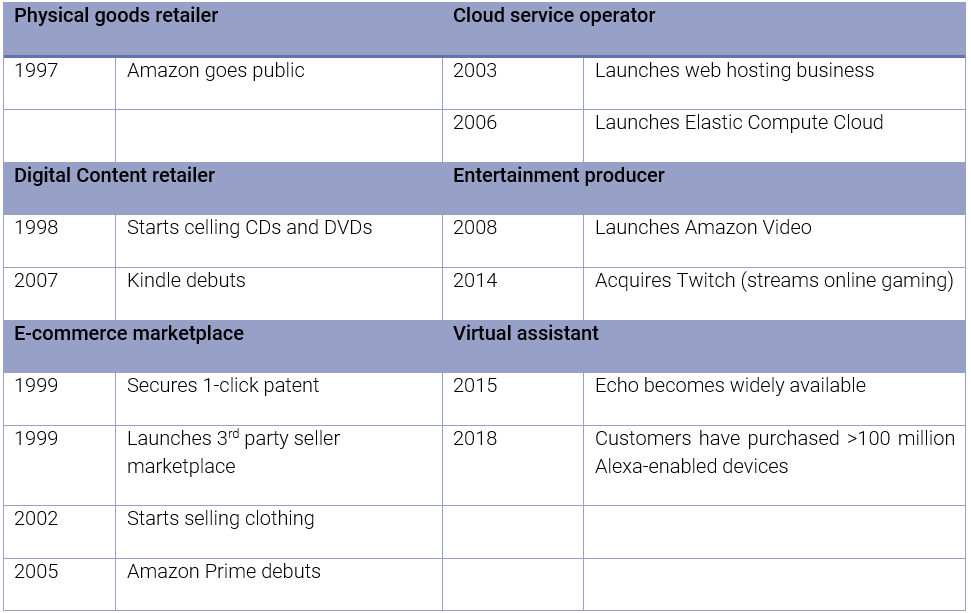 The rest of this report compares Amazon’s physical assets against those of telecoms operators, to draw some parallels on how telcos could make better use of their vast physical assets.