Amazon, Facebook and Google are engaged in a global contest to become the pre-eminent broker of digital commerce between merchants and consumers. Google controls the leading digital platform – the Android smartphone. And Facebook dominates mobile messaging. But new digital platforms are emerging – the growing popularity of smart speakers, which rely on cloud-based artificial intelligence, could help Amazon, the original online chameleon, to bolster its fast-evolving ecosystem at the expense of Google and Facebook. As the digital food chain evolves, opportunities will open up for telcos, but only if the smart home market remains heterogeneous and very competitive.

Amazon is using an array of innovative propositions to sidestep the Android-Apple duopoly in the smartphone market and Facebook’s rapidly expanding digital commerce ecosystem. Amazon’s vast selection, unparalleled logistics, innovative bundling, laser-like focus on the customer, rapidly improving entertainment proposition and leadership in voice-controlled in-home systems mean the Seattle-based e-commerce giant is fast becoming a omnipresent convenience store that always has what you want, when you want it.

Continually reinventing itself, Amazon’s restlessness could seriously disrupt the balance of power between the major global Internet ecosystems. Although the Amazon, Apple, Facebook and Google ecosystems all originate from the PC-era, they have each managed to successfully extend their digital platforms into the smartphone and tablet markets. But not without a dramatic change in the pecking order. In fact, the advent of touch-controlled smartphones enabled Apple to become a major force in the digital consumer market, while weakening the position of its long-standing foe Microsoft.

Now these ecosystems need to navigate the tricky transition to voice-controlled digital platforms, which depend heavily on advanced speech recognition, artificial intelligence and machine learning technologies. Amazon is leading the way, having created this new market with the rollout of its Echo speaker, underpinned by the cloud-based Alexa personal assistant system.

This report analyses Amazon’s financial firepower, the Amazon Prime bundle and strategy of bundling entertainment with retail, before considering Amazon’s areas of relative weakness – the smartphone and communications markets. In this section, the report also considers whether Amazon can sustain its lead in the nascent market for voice-controlled speakers for the home.

It concludes by exploring whether Amazon has sufficient economies of scope to build the expertise in artificial intelligence that will be required to ensure the Apple-Android duopoly that exists in the smartphone market won’t also dominate the emerging smart home sector. Finally, it considers the ramifications for telcos and makes several high level recommendations.

Online commerce continues to grow rapidly. In 2016, global retail e-commerce sales (products and services ordered via the internet) will rise almost 24% to reach $1.915 trillion in 2016, according to research firm eMarketer. As that represents just 8.7% of total retail spending worldwide, there is plenty more growth to come. eMarketer expects retail ecommerce sales will increase to $4.058 trillion in 2020, making up 14.6% of total retail spending that year (see Figure 1). 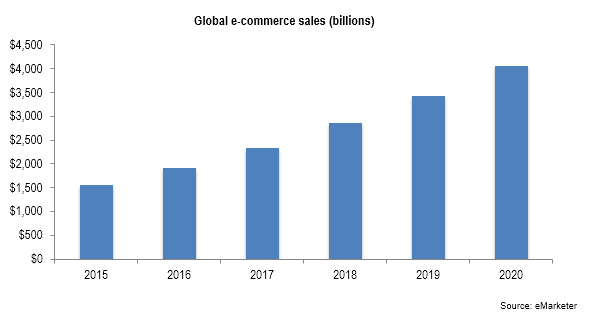 The major global Internet ecosystems – Amazon, Apple, Facebook and Google – all take a slice of this market. Within their ecosystems, they act as brokers bringing buyers and sellers together, earning a commission for facilitating interactions and transactions. Google and Facebook are the leading players in online advertising, while Apple is a leading distributor of digital content: Although Apple still generates most of its revenue from devices, its App Store and iTunes service are now major contributors to its top line. Still, in online commerce, Amazon rules the roost: Its online marketplace, which offers a vast selection of products and services from millions of merchants, continues to grow rapidly.