As several operators in Europe downsize their Telco 2.0 Digital Services activity, some are seeking to reframe the Piper strategy as a premium-priced differentiation play based on network quality. This report argues this is deluded and dangerous – a Piper strategy is viable but only by developing cost-leadership in a commodity market.

Last week STL Partners held an event for senior strategists, marketers, and digital unit leaders across Europe.  The event was attended by 24 executives from 13 operators and 5 executives from Cisco, Intel and CSG International.  All except a handful of people held senior positions within the European telecoms industry – they were not junior staff but instrumental in shaping the thinking at some of the leading European operators.

The event covered several strategic issues facing the European and, in many cases, wider global telecoms industry including:

It was in the second session on how to build value in future that the notion of ‘repremiumization’ was articulated (although nobody used this term). In essence, participants from at least two Tier 1 telcos felt that STL Partners’ description of the Piper strategy as one of competing hard in a commodity market – a market characterised by lack of differentiation in services – was wrong and that in future they would be able to ‘reframe the value of the network in the minds of consumers’ by differentiating against other players based on network quality. This differentiation would enable them to attract premium prices and grow ARPUs. The well-trodden path of ‘network APIs’ were cited as a key way of driving additional volumes (and revenue) through a premium-quality network.

Indeed, attendees were so insistent that this ‘repremiumization’ strategy was viable that when STL Partners asked attendees to vote on the four strategic options (2.1-2.4 above), they asked for it to be added as a fifth option which we have termed ‘Premium Piper’ in Figure 1 below. The chart reflecting the votes of attendees, below, is interesting for a number of reasons:

Figure 1: Where should the European telecoms industry place its bets for future success? 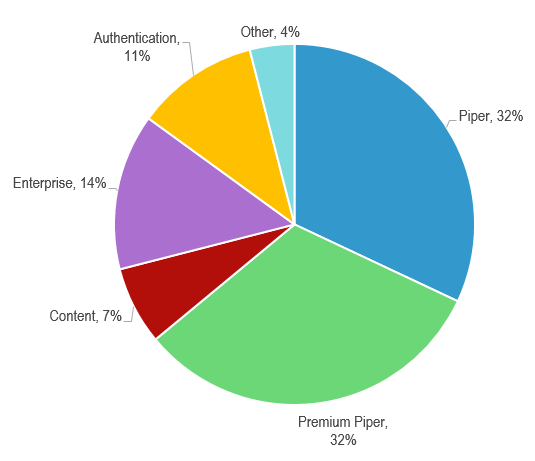 …and put forward by a leading strategy house

The notion of a superior network resulting in superior revenues and returns is one that has, for example, been put forward in a paper by Bain and Company’s European office – the argument is set out here and can be summarised thus: 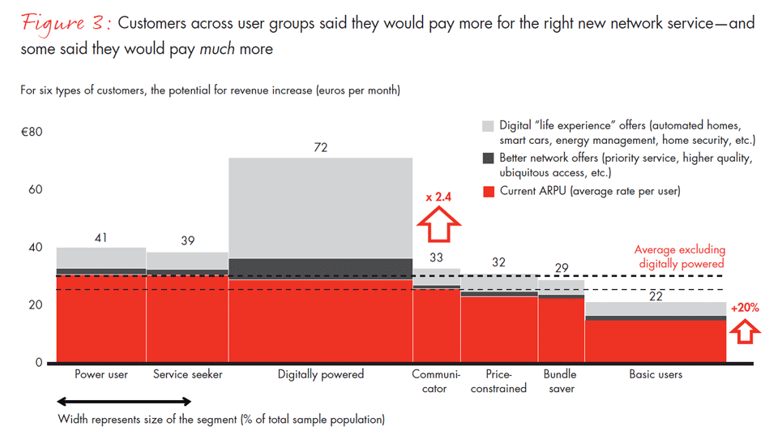 STL Partners is convinced that repremiumization is wrong.

The repremiumization argument simply does not stand up to scrutiny

Here is our challenge to the 8 point argument outlined above for repremiumization.

STL Partners does believe that operators with a network advantage do enjoy a competitive advantage.  3 in the UK illustrates this point nicely. It has gone from being a joke among consumers between 2003 and around 2010 owing to poor handsets and network quality, to being the network of choice for, as Bain’s survey puts it, the ‘Digitally Powered’. Indeed it heavily markets its network based on its quality:

‘Big-boned’ ‘Designed for the Internet’  ‘More capacity than any other’

The message is that the 3 network is bigger, faster and better than rivals.  So is this an example of differentiation and price premium based on network quality?

3UK’s network, being younger than its peers, is more efficient – the company has a 3G and 4G network only and is not hamstrung by the expensive and complex patchwork of 2G networks that Vodafone, O2 and EE (T-Mobile and Orange) have to manage.  This cost advantage has been further increased by an outsourcing strategy that has been in force for at least a decade – 3 was the first UK operator to outsource its network as well as most product development and management functions.

An efficient network has enabled 3UK to focus on offering better value than its peers to consumers. Its strategy of connecting over 90% of its base stations with fibre backhaul rather than microwave and its dubious ‘advantage ‘of having lots of spectrum for each subscriber compared with other players (owing to its historical low market share) also means that it is not capacity-constrained. Because it is has a lower cost base and lots of excess capacity, it can offer more data and speed for the same price as peers and still make more money than them.

This is not differentiation based on network capabilities – APIs, dynamically delivered bandwidth, etc. but simply a cost advantage that means that 3UK can deliver data more efficiently than others enabling it to offer better value to consumers and so pull away from its peers in terms of volume and margin growth (see Figure 3). It is interesting to note that 3UK is, like the cost-leader Free in France and Play in Poland, a late entrant not a big Tier 1 incumbent at all – quite the reverse of the argument put forward in Bain’s paper. 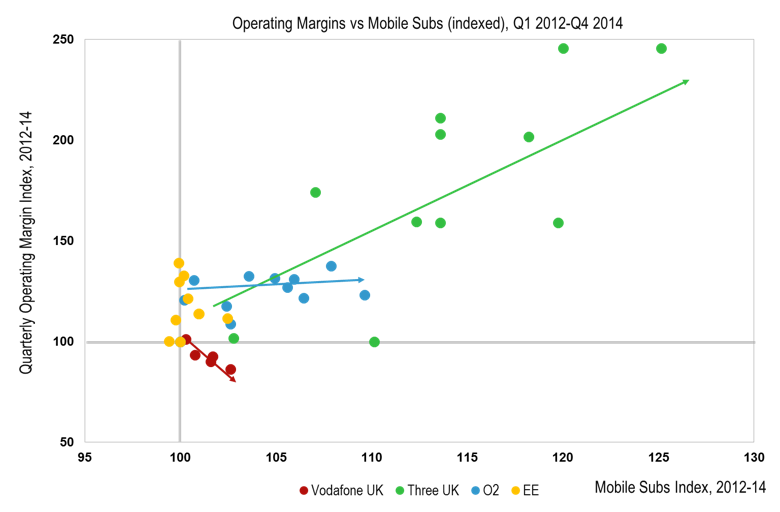 ..does not equate to repremiumization…

Readers may be thinking that if 3UK is able to offer a better data service, then surely it could, if it chose to, price this at a premium and so lift ARPU and margins that way – surely network-based differentiation is alive and kicking?

No, STL Partners thinks that higher access and data prices for 3UK would be highly unlikely on a sustainable basis for two reasons:

…and will not yield ever-increasing ARPU

If 3UK is unlikely to achieve sustainably higher prices than competitors, surely rising demand from video and other consumer services and the Internet of Things will ensure that ARPU will continue rising at 3UK as it delivers higher tonnages to customers?

No, again, for two reasons:

Lessons from the steel industry: Network quality is unlikely to provide sustainable differentiation

The US (and European) steel industry suffered major disruption during the 1970s and 1980s as large quantities of steel started to be produced by economies with lower labour costs such as China, India and Korea.  The major US steel producers – US Steel, National Steel and Bethlehem Steel – were massive companies which, in their heyday had each employed 100,000 people or more.  They operated integrated steel mills.  That is they mined the raw iron ore from their quarries, smelted it in a blast furnace and then refined the pig iron to produce steel which was cast into different products.  The rationale for integration was that costs could be minimised by ensuring that low-value iron ore did not have to be transported long distances to the plant (which was built next to the quarry).  However, even though they introduced efficiencies, they still employed large quantities of expensive labour during the process which pushed up their production costs relative to that in the emerging economies.

A low-cost start-up with a new business model

In the mid-1960s, Nucor, a medium-sized company with an extremely chequered history up to that point, purchased a steel joist manufacturer called Vulcraft.  Unable to get favourable prices from American companies and concerned about the quality of imported steel, Nucor integrated backwards into steel production.  Iverson, the Nucor CEO, established a new form of steel production in smaller plants, mini-mills, which melted scrap metal down to produce steel.  These modern plants, which were located closer to destination markets to minimise shipping costs of the finished product were far more efficient than the old integrated mills.  They used a fraction of the labour, producing a tonne of steel in around 45 minutes of labour time versus 3 hours at the integrated mills.   This difference meant that by the mid-1980s Nucor could produce steel around 25% cheaper than the integrated mills.  This, in turn, meant that not only could it beat its domestic rivals, but that it could also compete with competitors based in the cheap labour markets.

Quality (Repremiumization) does not result in higher prices

The companies with integrated steel mills were slow to react to the foreign threat and that of Nucor.  Why?  Because they believed in a form of ‘Repremiumization’ – that the quality of their steel was higher than Nucor’s and foreign competitors.  Your author was an equity analyst in the 1990s for JP Morgan covering steel stocks and consistently heard the message from senior managers at US (and European steel operators such as British Steel, Usinor Sacilor and others) that their steel had higher tensile strength and was much higher quality than the cheap imports and steel produced by mini-mills.  So, although they chipped away at costs they did not fundamentally re-engineer their businesses to match the cost base of the overseas players.  The problem, of course, was that the steel provided by the foreign companies (and Nucor) was ‘good enough’ – it met the specifications required for the vast majority of applications.  One customer put it like this when talking about the higher cost players, “They go on about the quality of their steel but it’s still carbon steel, it still rusts, so why should I pay so much more for so-called quality I don’t need?”

Today Bethlehem Steel and National Steel have gone (bankrupted in both cases) and US Steel, the biggest of the three, is grimly hanging on but producing less steel now than it did in 1900.  Nucor, meanwhile, has grown to become a Fortune 300 company (see below).  And as for the cheap foreign players?   They have also thrived and Tata Steel and Mittal Steel together now own most of the European steel giants.  The lesson here is clear: telcos cannot rely network quality alone as a means of differentiation, premium pricing and growth.

Figure 4: The importance of cost reduction in disrupted industries – The US Steel Industry 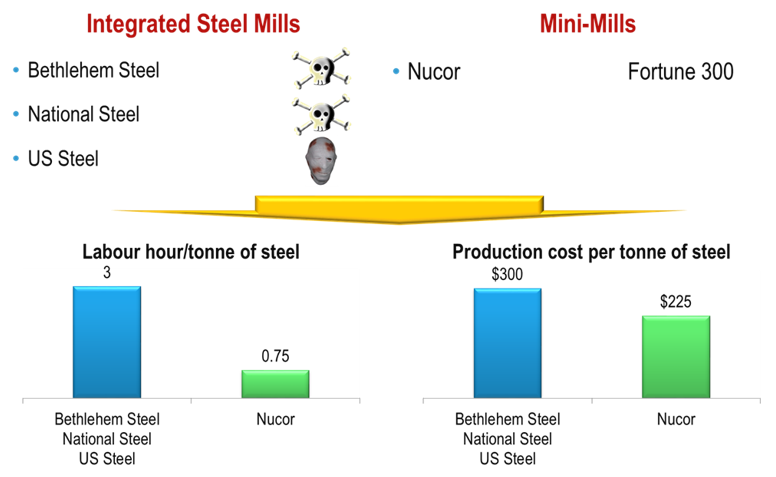 At best ‘repremiumization’ is misguided; at worst it is pandering to the hopes of some operators that they can somehow return to the ‘good old days’ of high margins and high market shares. Even the name suggests a return to nirvana. But the only time when European operators enjoyed premium pricing was before the market was liberalised – when the incumbents were state monopolies or duopolies. The moment that markets were opened up and competition ensued, so costs and prices were driven down. Higher ARPUs stemmed from higher volumes and premium services.

If operators want to differentiate and achieve higher ARPUs, revenues and margins in the increasingly tough saturated telecoms market of 2015 then service innovation – content services, enterprise services, enabling services – is the only solution. Otherwise the focus should be on cost reduction – building efficient and effective pipes.

If operators want to try to raise prices on the back of a repremiumization marketing message, that’s fine but they will enjoy as much success as King Canute had in ordering the tide back. One thing though, please don’t dress a misguided marketing pitch up as strategy – you’re fooling nobody but yourself.

So that’s our view, but what’s yours? There’s a snap poll below – we’ll share the results on 16th July.

As at 15th July 2015, 79% of Respondents Agreed that Repremiumization is not a viable strategy for European Telcos