The Consumer Internet of Things (IoT) market could be huge, but hasn’t yet taken off. We look at why, analysing leading telcos’ and others strategies to date (including DTAG, Orange, and Telefonica), and outline a strategy for how telcos could play a major role by solving some of the key problems.

There was an expectation two to three years ago that take-up of consumer Internet of Things (IoT) services was set to accelerate, and that we would soon witness the success of mass market consumer IoT offers in areas such as energy management (linked to roll-outs of smart metering), home automation and security, and health and wellness applications (linked to wearables such as smart watches, fitness trackers and medical condition sensors). It was also widely expected that telcos would play a leading role in this market.

Although growth has occurred in these product areas, it has generally been below expectations. Everett M. Rogers’ diffusion of innovations theory shows how the different stages of public acceptance a new product goes through, with successive groups of consumers adopting the new technology (shown in blue), so its market share (yellow) eventually reaches saturation level. Looking at this theory, STL believes that consumer IoT is still in the “early adopter” stage. 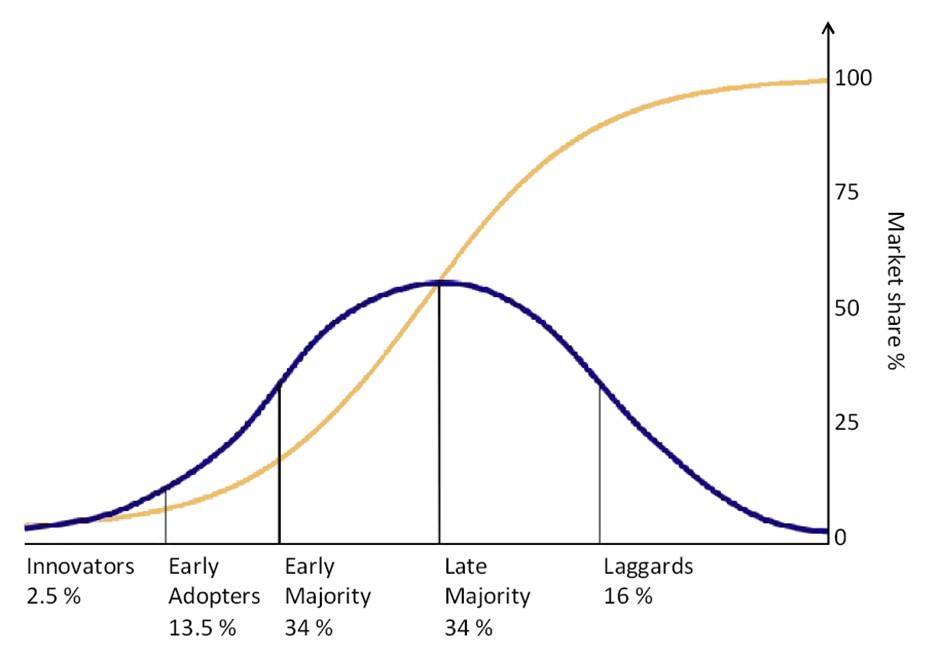 In addition to this, telcos have tended to play a peripheral part in the market thus far, limited largely to providing the wireless and broadband connectivity supporting third-party products developed by players focused on adjacent vertical markets. Already the focus of telcos’ IoT strategies seems to have been redirected to enterprise and industrial IoT applications, along with the rapidly maturing connected car and smart cities markets, judging from the wave of new product and partnership announcements in these areas at recent trade shows, such as this year’s Mobile World Congress (MWC). Despite this, we believe that consumer IoT could still represent a large addressable market for telcos, based on data presented in chapter 3.

There are many reasons for the levelling of the expected consumer IoT growth curve, some of which we will explore in this report. In terms of definitions, we are limiting the term ‘consumer IoT’ to ‘consumer-centric’ applications and services, whether these are deployed primarily in the home (such as home automation and security) or on the person (e.g. wearables, and health and wellness). We will not directly discuss connected car / autonomous vehicle and smart cities applications, even though they relate to consumer services and experiences, as the dynamics of these services and their technological challenges are quite distinct. In addition, we will only tangentially discuss healthcare IoT, as it is far from clear what sort of ‘consumer’ business model will be established in this sector (as opposed to a public service model); although it is likely that remote health and social care will play an increasingly central role in a prospective ‘second wave’ of consumer IoT services, based on trustworthy processing of intimate personal data to enable really useful services.

In addition, we make a distinction between ‘connected’ devices and homes, on the one hand, and ‘smart’ devices / homes and IoT services, on the other. A home is not smart, nor an IoT service present, until the connected devices or ‘things’ involved, and the data they generate, are integrated as part of an app that the user controls. As shown in Figure 2, in the existing IoT business model, this involves delivery of the data from multiple devices and sensors to a cloud-based service, enabling collection, aggregation and analysis of the data, and remote and automated performance of actions on those devices based on the analysis and on the user’s preferences.