This article is part of: Edge Insights, Growing Enterprise Revenues

Despite the hype around edge computing, telcos have been slow to commit investments amid competing priorities for networks teams. How can they work with partners to get the right balance between cost, speed of deployment and developer needs in a fast moving competitive market?

Edge computing has been hailed as key to help deliver the promises of 5G, enabling transformative use cases and experiences. Significantly for mobile service providers, deriving value from their networks and presence at the edge remains an aspiration for a new source of revenues and a more favourable position in the value chain. There is strong belief that this needs to exceed what was achieved with 3G and 4G, where OTT players built entire businesses through successful services using centralised platforms leveraging fast, ubiquitous internet access. Mobile operators remain hopeful that they can evolve from ‘dumb pipes’ and derive more value from dynamic connectivity services, value added platforms, and partnerships.

The edge means different things to different people, so it is useful to define terminology and clarify the scope of this report. We understand the edge to refer to compute, storage and networking infrastructure, facilities, software, and services which exist physically or architecturally between typically non-telco cloud data centres and end-devices. This report will focus on the ‘telco edge’ for both mobile and fixed line telecoms operators.  The term MEC (initially ETSI’s Mobile Edge Computing which evolved to Multi-access Edge Computing) has historically been used for telco edge predominantly with a focus on deployment in the access network, however as we will see its use has somewhat broadened as telcos initially deploy edge computing more centrally.

The edge continuum spans between end devices and hyperscale cloud

It is common practice to define an edge continuum in a diagram such as below which shows the different edge locations between an end device and the hyperscaler cloud. Typically, the physical distance, the number of network hops, and network latency will increase the further the edge location shifts to the right.

In considering the telco edge, we will primarily be focussed on the network edge, consisting of data centres logically situated in telco’s access, transport, and core network facilities. The on-premise edge (sometimes referred to enterprise or private edge) may be offered by telcos and others to enterprises but is closely related to private 4G/5G networks and single tenant propositions which are out of scope of this report. STL has written about this in reports such as Private networks: Lessons so far and what next and Combining private 5G and edge computing: The revenue opportunity.

The regional edge sits outside telco networks at internet exchanges, carrier exchanges, interconnect points, co-location, and data centre facilities. Multiple parties can deploy infrastructure at such locations which are designed as neutral, well-connected locations for third party equipment.  For some use cases, these locations are considered as ‘close enough’ or ‘near enough’ edge sites.

Edge computing drivers and benefits vary depending on the use case

While low latency is often cited as the justification for moving application workloads from the cloud to the edge, there are other drivers such as reduced data transit, data sovereignty and improving redundancy. These factors may be just as relevant as low latency, or more so, depending on the specific use case. 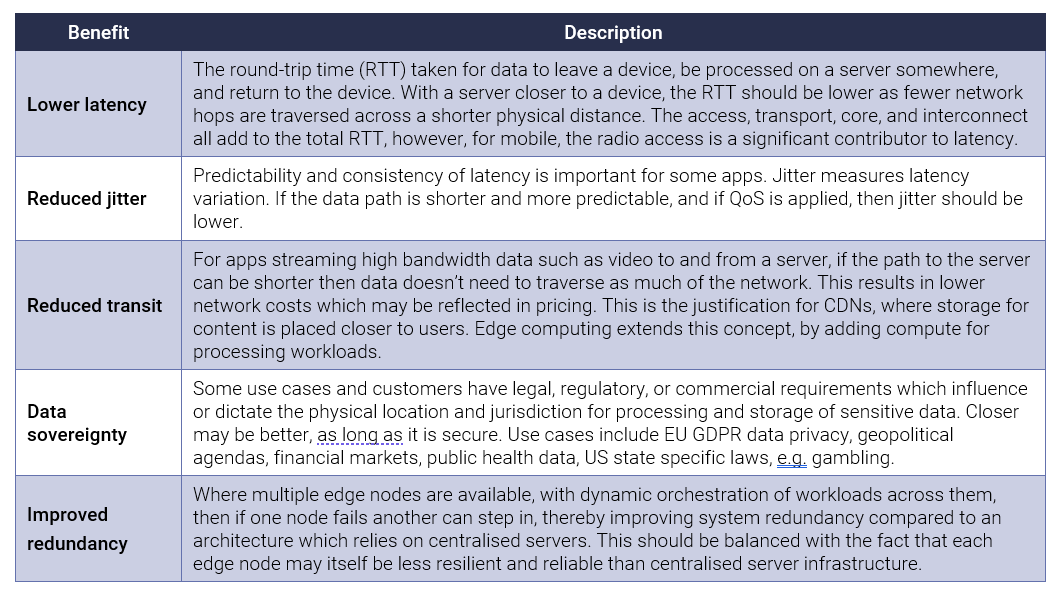 Migrating workloads from end-devices to the edge can also bring benefits such as reduced power consumption, allowing smaller form factors at lower costs, and enabling experiences that are simply not possible on existing devices due to heavy computational requirements. Processing in the cloud may have been previously dismissed due to its limitations or constraints. One consumer example would be Instagram or Snapchat real-time video filters with heavy machine learning processing requirements. The processing for these may move to the edge to improve and standardise performance across devices, by not relying on the end-device’s processing power. Partners

However, the public cloud is well established and here to stay, so it is prudent to view the edge as complementary to and an extension of the public cloud, offering characteristics which may be important for specific components of certain use cases.