As a conglomerate with growing investments across the Internet of Things and AI value chains, SoftBank is a unique and intriguing player in the telecoms industry. What exactly is SoftBank’s strategy, and does it give its telecoms businesses a competitive advantage?

SoftBank’s history: How it got to where it is

The story of SoftBank’s history – first as a software distribution company, followed by its contribution to the dotcom bubble, and then a gradually expanding telecoms footprint throughout the 2000s – is important because it gives context to its current investment strategy, dubbed the Vision Fund. SoftBank has never been a traditional telco and its outside perspective helped it to shake up the Japanese telecoms market. The Vision Fund’s ambition stretches far beyond telecoms, with an aim to transform all industries through the adoption and advancement of artificial intelligence (AI). Will this unique approach enable SoftBank to weather the softwarisation of telecoms, which will likely be accelerated by the newest Japanese entrant Rakuten, better than others? 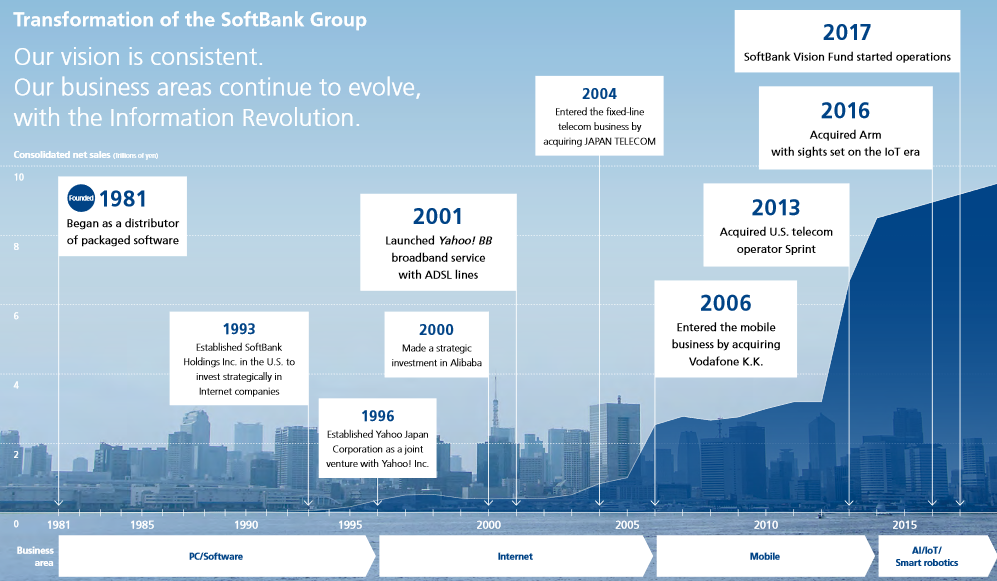 Founded by Masayoshi Son in 1981, SoftBank began not as a telecoms operator but as a software distributor. Son had recognized an important niche in the Japanese market: while computer hardware manufacturers were having issues sourcing quality software to run on their machines, software makers lacked the cash to properly advertise their products. As a distributor, Son acted as a matchmaker between computer software and hardware companies. Though exclusivity agreements with Japan’s major hardware vendors, SoftBank’s monthly sales reached US$2.4 million by the end of its first year of operation.

Not satisfied with a sole focus on software distribution, just six months after starting the software business, Son branched out into the computer magazine publishing segment, eventually producing over 20 periodicals. Son used his magazines to advertise the software products SoftBank was distributing. Right from the start, he aimed to create value through exploiting synergies across different business units.

In 1990, SoftBank also branched out into trade shows, acquiring Ziff Communication’s trade show division for $200 million and then, in 1995, the COMDEX trade show from the Interface group for an eyebrow-raising $800 million, taking on $500 million in debt. Later that year, SoftBank cemented its status as a leader in computer-magazine publishing, investing $2.1 billion in Ziff-Davis Publishing, making SoftBank the largest PC magazine distributor in the world. To finance this, SoftBank Group added $1 billion in debt and issued $649 million in new shares (SoftBank having gone public on the Tokyo Stock exchange in 1995, at a $3 billion valuation). It is clear from the beginning that SoftBank was not averse to accruing sizeable debt liabilities to finance strategic acquisitions.

SoftBank’s defining play in the 1990s was a pivot towards Internet services. Believing that the Internet would be the next technological revolution – eclipsing the invention of the personal computer – SoftBank made a dizzying number of investments in Internet companies. Many of these investments were made indirectly through a network of SoftBank venture capital funds, mainly overseen by SoftBank Investment Corp, which managed $5.25 billion worth of funds by 2000; SoftBank itself contributed over $2 billion. The investments included big name sites in e-commerce and e-finance, notably GeoCities, Yahoo!, ZD Net, e-buy-com, E-loan and E* TRADE Group.

SoftBank was heavily invested in – and therefore heavily exposed to – Internet stocks. Moreover, with a reputation as the largest investor in the world, owning as much as 25% of cyberspace by value at its peak, SoftBank became regarded by the market as fundamentally an Internet company. At the height of the dotcom bubble in February 2000, SoftBank’s market cap soared to $180 billion, far exceeding the equity value of the stakes in its subsidiaries and affiliates.

The dotcom bubble began to burst by early March 2000. Between SoftBank’s peak market cap in late February 2000, and its low point two years later, SoftBank lost over 95% of its market value. Masayoshi Son lost $70 billion of personal wealth during the crash. Many of SoftBank’s Internet investments had to be written-off entirely, including dotcom big names such as Webvan, Kozmo.com and Global Crossing – the latter filing one of the largest bankruptcies in corporate history.

However, across the graveyard of dotcom duds, SoftBank made several investments which delivered extraordinarily high returns. One resulted from a $20 million pledge Son made to Alibaba founder, Jack Ma, in January 2000. According to Ma, Son made the investment without first inspecting Alibaba’s business model or revenue stream, but rather based on Son’s impression of Ma. The Alibaba investment would turn out to be one of the most successful in history. Moreover, SoftBank’s investment in Yahoo! was still fruitful relative to Son’s initial pledge, despite falling foul of the dotcom bust. This is testimony to the efficacy of Son’s ability to adapt US companies to meet the needs of the Japanese market, delivering growth long past the NASDAQ stock crash. It is also one of the key reasons why SoftBank was able to attract nearly $100bn of investment for its Vision Fund in 2017.

Does SoftBank’s approach work for telecoms?

SoftBank Group is deeply tied to its charismatic CEO Masayoshi Son’s grand visions about how new technologies such as the Internet, the Internet of things (IoT) and artificial intelligence (AI) will transform the world. Son’s ambition to play a key role in driving the development of these technologies has led SoftBank to achieve some remarkable successes – notably an early investment in Alibaba and building a successful Japanese telecoms business – and survive some major setbacks, such as the dotcom crash and, more recently, the WeWork scandal.

The key question for telecoms operators is whether SoftBank’s telecoms assets gain any competitive advantage from being a part of SoftBank Group. Since SoftBank took ownership of Vodafone KK in Japan in 2006 and Sprint in 2013, both telecoms operators have become more profitable. While SoftBank’s stake in Yahoo Japan and willingness to take risks have contributed to success, neither operator is really exceptional in the way they manage their core business.