Developing new digital services is a key growth strategy to make up for Voice revenue decline, but many telcos are struggling to implement it effectively. NTT DoCoMo has made more progress in digital services than any other operator, but is often dismissed as an example because Japan is considered "too different" to be useful for other operators. We disagree with this assumption and highlight key lessons that operators can learn from NTT DoCoMo's digital journey.

The need for telco transformation

Telcos are facing difficult times; as we wrote in a recent report – Which operator growth strategies will remain viable in 2017 and beyond? – the days of meteoric growth are in the past, and telcos need to find a new approach to prevent a dramatic decline in their revenues. This is not a new story; STL Partners has been writing about this phenomenon and the need for business model change since 2006. In the afore-mentioned report we discussed seven different growth strategies used by telcos between 2009 and mid-2016, and came to the conclusion that only one, which involves developing or acquiring new businesses and services, is viable for 2017 and beyond if the industry is to reignite sustainable growth.

Digital services are an important part of this growth strategy. In fact, as Figure 1 shows, STL Partners estimates that digital business should represent 25+% of Telco revenue by 2020 to avoid long-term industry decline.

Figure 1 – Transformation priorities are different for every operator 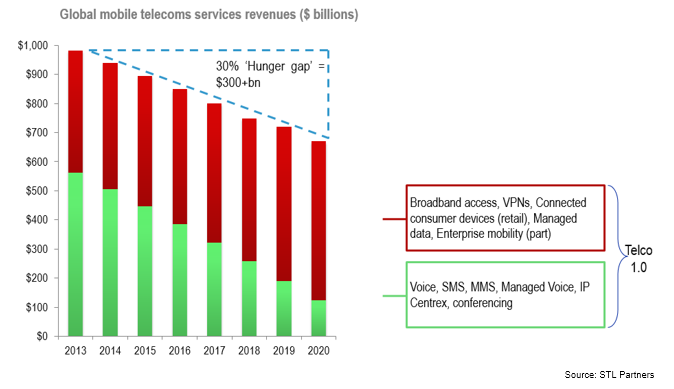 One of STL Partners’ global observations is that all operators have different goals in the pursuit of transformation. This was also true with the group in Singapore, as shown by the following chart of a vote on the priorities assigned to different transformation objectives.

NTT DoCoMo – an example for other operators

With this in mind, telcos need to think about how they will develop new businesses and services. NTT DoCoMo provides a useful example for other telcos because it has done more than any other operator globally to develop digital services.

However, some people claim that the Japanese mobile market is so unique that it does not provide a useful role model for telcos in other markets. STL Partners disagrees with this point of view. Although the Japanese mobile market does have some unique characteristics, in some cases what was originally thought of as “unique” has just been proved to be “advanced.” An example of this is the popularity of apps and the iPhone – before this it was claimed that Japanese consumers were more engaged than those in other markets with mobile games and gadgets – however, the worldwide popularity of the iPhone and smartphones has disproved this.

In fact, although not advanced in every area, the Japanese mobile market has experienced several key phenomena earlier than other countries, such as an early peak in revenues and market disruption from non-telcos. Therefore, STL Partners thinks telcos should be examining the Japanese market to help them prepare for the future challenges of their own. Examples of this can be found in NTT DoCoMo’s annual reports – as early as 1999 the company was talking about the need to develop new sources of revenue (such as digital services and machine-to-machine communications) because of the inevitable decline in voice.

We therefore think that, although telcos in different markets cannot replicate NTT DoCoMo’s strategy in Japan like-for-like, they can certainly adopt similar practices to help them succeed in the digital telco world.