The aim of this report is to set out and analyse three strategic pathways to the implementation of Network Functions Virtualisation (NFV) and Software-Defined Networking (SDN) taken by different telcos, and types of telco. We are calling these approaches ‘Technology Evolution’, ‘Service-led Innovation’ and ‘Organisational Transformation’.

We originally formulated the pathways as part of an analysis of the challenges that telcos were confronting as they embarked on their journey to implement NFV and SDN. The analysis was developed during a consulting project undertaken for Cisco Systems in the second half of 2016. In the present report, we are seeking to re-examine the pathways in the light of the experiences of telcos in 2017 – their challenges and successes – as they have continued to develop and deploy NFV / SDN across their networks.

Our analysis of the three pathways in the project for Cisco was built on a substantial body of STL research and industry knowledge on NFV and SDN, along with conversations with senior executives at 14 telcos from across the world, which we assigned to one or more of the three approaches. A brief definition of the pathways and the types of operator that typically adhere to them is provided below: 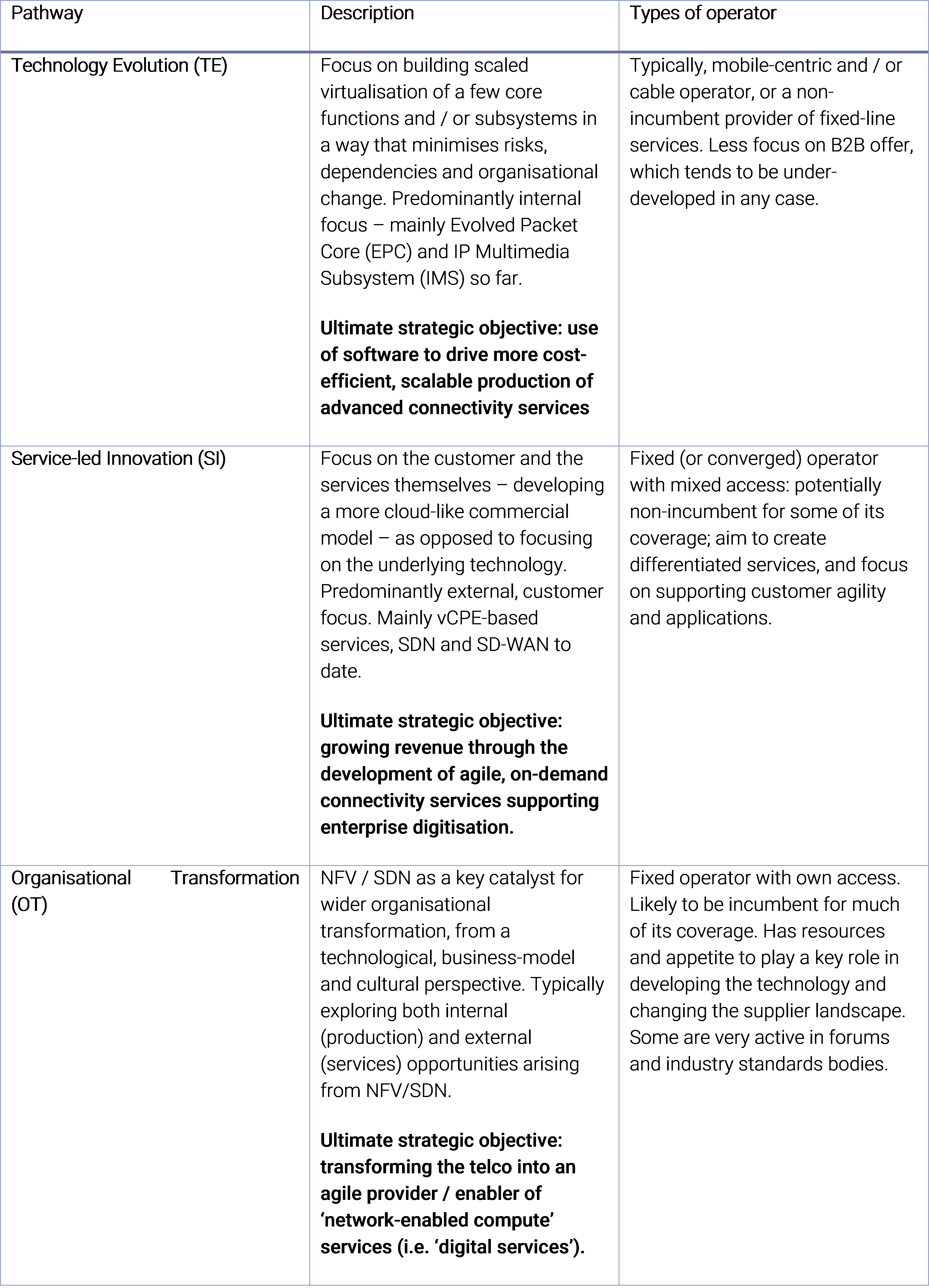 It should be noted that the pathways are not mutually exclusive or rigid, i.e. operators – and different business units within operators – can straddle more than one category, and the different approaches to virtualisation are overlapping to some extent. In addition, there is something of a natural progression from one pathway to another. For example, completing large-scale virtualisation programmes (Technology Evolution) then puts operators in a position to develop new use cases addressing customer needs (Service-led Innovation).

We aim to bring out the interplays and progression between these three broad approaches in the present analysis by focusing on three operators that exemplify some of the tensions and contradictions inherent to each of the pathways, insofar as NFV and SDN ultimately embody a transformative dynamic that is disruptive of existing business models and corporate cultures.

We should also note that not all of the examples discussed in the present analysis were included in the previous study undertaken for Cisco and that the material included here is derived from public-domain information, supplemented by conversations with the telcos themselves where they have been willing to share their experiences.