Updated analysis of STL Partners' NFV deployment tracker. What have Europe's major telcos done, how are vendors faring, and who leads the pack?

Welcome to the fourth update of the ‘NFV Deployment Tracker’

This is a brief extract from the report which is an accompaniment to the fourth update of the ‘NFV Deployment Tracker’ Excel spreadsheet (to the end of September 2018). The update covers all of the global market data. However, the analytical report focuses more narrowly on European deployments, set in global context. We review the progress made over the past year and analyse the drivers of the deployments observed and the challenges faced by leading European telcos.

Detailed explanation of the scope of the information provided in the Tracker, definitions of terms (including how we define a live ‘deployment’ in general, and definitions of frequently used NFV / SDN acronyms) and an account of why we think it is important to track the progress of NFV / SDN are provided in the first analytical report of the series – so we will not repeat them here.[1]

We define ‘European’ deployments as those that take place in Europe, whether:

Some of the deployments in category two may also extend to other global regions (e.g. Telefonica deployments across both its European and Latin American opcos) – in which case they are also included in the totals for those other regions. Conversely, some European deployments are undertaken by telcos based in other regions, e.g. operators with opcos in one or more European markets alongside their domestic market.

However, in this analysis we do not count global deployments by non-Europe-based telcos as ‘European’, even if they extend to parts of the European territory. We assign implementations of genuinely global NFV or SDN platforms to the telco’s region of origin, as this provides a more useful and verifiable way to track the development and commercialisation of NFV / SDN technology by telcos in each region of the world[2].

Analysis of the European data set

NFV deployments grow in volume but not depth

We have gathered data on 126 live, commercial deployments of SDN and NFV in Europe between 2012 and September 2018. These were completed by 30 telco groups in 30 countries in the continent, together with Pan-European or global deployments carried out by some of the same European operators. The data on the deployments includes information on 260 known Virtual Network Functions (VNFs), functional sub-components and supporting infrastructure elements that have formed part of these deployments, i.e. an average of just over two components per deployment.

The volume of deployments has grown steadily year on year since 2012, as illustrated by the chart below:

Figure 4: Growth in the number of European SDN / NFV deployments per year, 2012 to September 2018 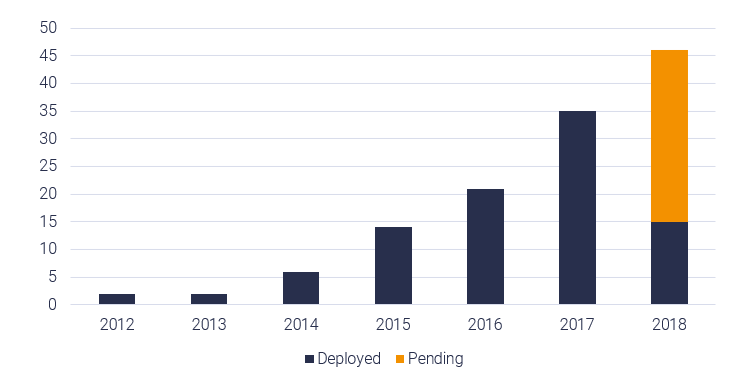