Asia-Pacific is the leading region in the global NFV/SDN market: highest volume of deployments and consistent record of innovation. The region points the way ahead for the global market.

About the NFV Deployment Tracker

The NFV Deployment Tracker is a quarterly-updated database of commercial deployments of Network Functions Virtualisation (NFV) and Software-Defined Networking (SDN) technologies by leading telcos worldwide. It builds on an extensive body of analysis by STL Partners over the past four years on NFV and SDN strategies, technology and market developments.

The Tracker is provided as an interactive Excel tool containing line-by-line analysis of nearly 600 individual deployments of NFV and SDN, which can be used to drill down on trends by company and region. 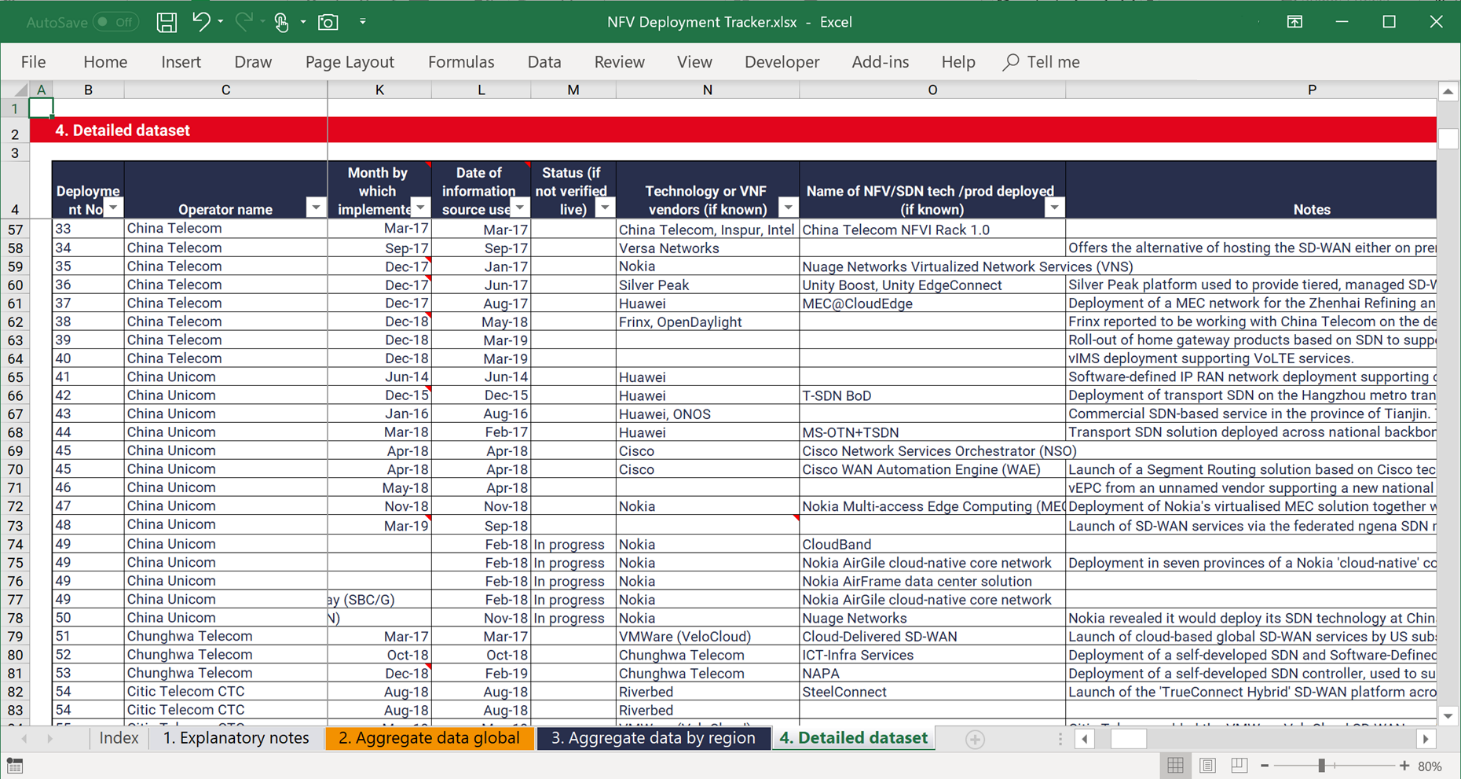 Each new release of the Tracker is global, but is accompanied by an analytical report which focusses on trends in a given region. Previous analysis includes:

This report accompanies the seventh update of the NFV Deployment Tracker, providing an overview of global trends, and a deep-dive on what’s happening in the Asia-Pacific region.

The NFV Deployment Tracker covers verified, live deployments of NFV and SDN in commercial telco networks. We do not include proofs of concept, commercial trials or mere agreements to deploy, unless these eventually result in a full commercial deployment.

The data derives mainly from public-domain sources, such as press releases by operators and vendors, or reputable industry media. We also include undisclosed deployments that the operators concerned have informed us about on a confidential basis. These are subsumed within the aggregate data sets analysed in this report but are not itemised in the detailed information contained in the Excel spreadsheet.

We include only telecoms operators, and not other types of company that rely on communications infrastructure and services to deliver their own services (such as cloud providers, internet exchange and hub operators, vendors, systems integrators, etc.).

The telcos included are mainly Tier One providers: those that rely on their own national and international, end-to-end facilities to deliver B2C or B2B services. However, we also include information on incumbent or dominant operators for smaller countries – which are not big enough to be defined as Tier One – as well as particularly innovative deployments by smaller or start-up players in significant markets.

Data in this report covers deployments from 2011 until August 2019.

We have gathered data on 572 live, commercial deployments of NFV and SDN technology worldwide between January and August 2019. These deployments include 1,161 VNFs, software sub-components and infrastructure elements for which information is available. Overall, the volume of new deployments worldwide has increased every year since 2011.

The total of 132 deployments for 2019 in the above chart includes both completed and pending implementations (we define pending as ongoing deployments that have not yet been verified as completed, but which we expect to be concluded in 2019). In addition, the 2019 total shown here runs only up to the end of August 2019; so we are confident that the full-year total for 2019 will exceed the 147 deployments recorded in 2018.

In fact, the number of deployments in Europe and the Middle East in 2019 to date has already exceeded the total for each of these regions for 2018 as a whole. In Asia-Pacific, the volume for the first eight months of 2019 (38) is already around 80% of the 2018 total (49) – meaning that the region is likely to show growth overall by the end of 2019. It must be noted that, by contrast, deployments in North America have declined significantly.

When measured purely in terms of deployments, Europe led the world for the first time in the first eight months of this year. However, in the previous three years – and overall – the Asia-Pacific region has deployed more than any other. We have gathered data on 203 live, commercial deployments of NFV and SDN technology in the Asia-Pacific region between January 2012 and August 2019 – 35.5% of the global total. This means that Asia-Pacific is the largest market for NFV and SDN. 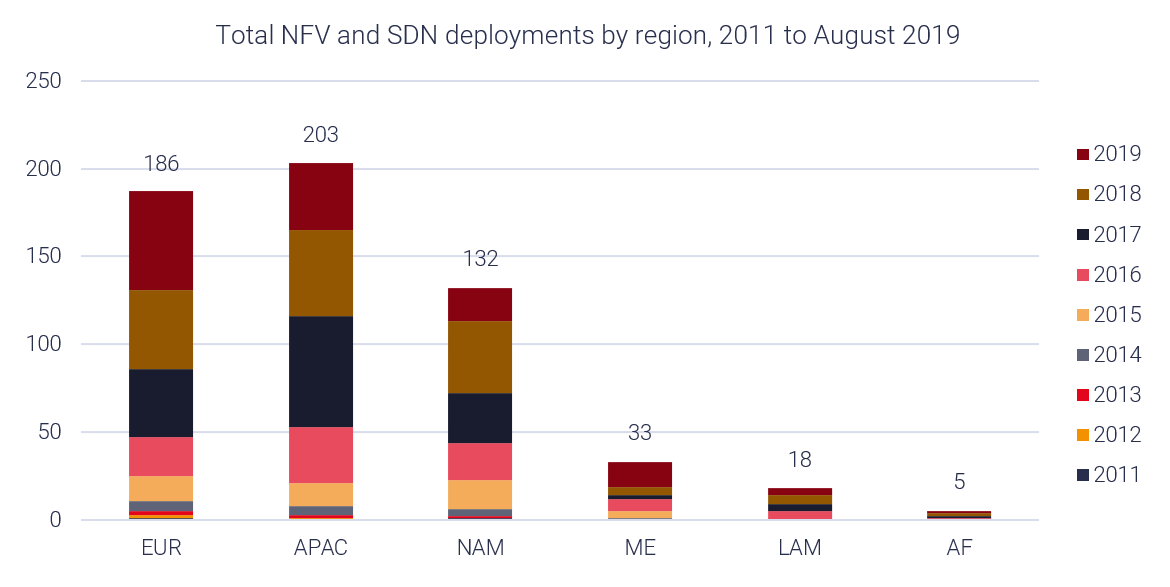