Blockchain has attracted a lot of hype, but what is it actually useful for? In this report and follow-up webinar, we discuss blockchain's strengths and weaknesses as a tool to solve business problems. The report identifies seven high potential use-cases where telcos could use blockchain to cut costs and support new services, and outlines which are most likely to be implemented first and why.

Introduction: What is blockchain?

Blockchain was first created as the technology that powers the Bitcoin cryptocurrency. The aim of Bitcoin is to transfer value between remote parties securely and anonymously, without a traditional ‘trusted’ intermediator like a bank. The creator of Bitcoin’s aim was to circumvent the traditional financial services sector – central banks, commercial banks and governments – in order to protect privacy and prevent currency manipulation (e.g. through interest rates or printing money).

However, without a bank to broker trust between two parties, users needed new means of guaranteeing that party A will deliver ‘x’ amount of money to party B in exchange for ‘y’ services. Blockchains overcome this lack of trust by distributing a ledger containing the entire history of all transactions across thousands of end-points globally.

Figure 1: How the Bitcoin blockchain works 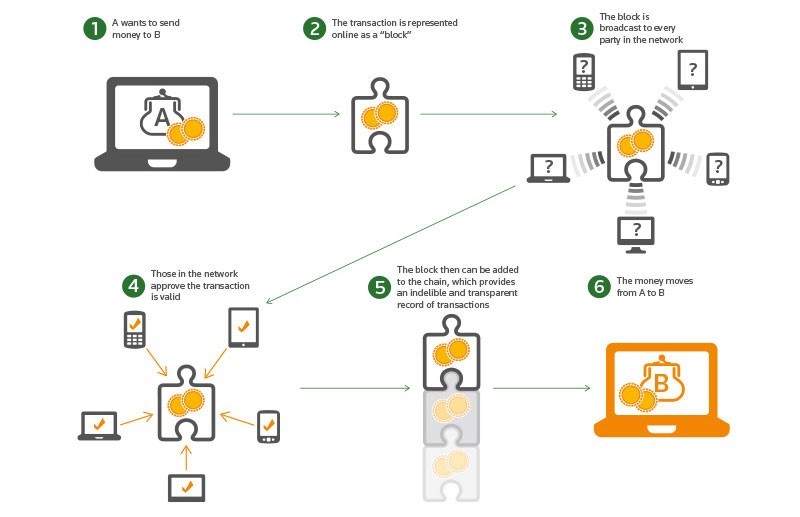 By relying on a transparent record of all historical transactions to authenticate each user’s actions, where transactions are executed by a large, distributed and disinterested network of computers (nodes), users cannot renege on agreements, conceal past transactions for fraudulent purposes, and can depend on constant uptime. Thus, blockchain’s decentralised system offers two important advantages over centralised databases:

On its own, a distributed ledger is a good way to prevent anyone from tampering with a historical record, but part of the revolution of blockchain is its combination of distributed ledgers with other technologies that help increase security and privacy, and which have protected Bitcoin from any significant manipulation since its inception. (Notorious attacks in the Bitcoin ecosystem have compromised the exchanges that trade Bitcoin for real-world currency, rather than the actual cryptocurrency.) Below we outline three of the main technologies underpinning blockchain:

Asymmetric cryptography: Each user has a public and private key, which is unique to them and impossible to alter or forge. The public key is visible and searchable to anyone and is linked to the private key. The private key is confidential to the user, and allows them to decrypt information sent to the public key. This means that the specific contents of a transaction can remain private, while the fact that it occurred is public. This is a widely-used technology, for example in end-to-end encryption of WhatsApp messages.

Hash functions: This is a technology that compresses larger pieces of data into a much, smaller unique numerical code called a hash value or a hash code. If any part of the data contained within a hash code is changed, then so will the hash code. Hash codes can also be programmed with asymmetric cryptography, so that they can only be decrypted by specific private keys. So, hash codes are useful for spotting any attempts to tamper with data and for keeping information, such as the details of a transaction between two parties over a blockchain, private. In a blockchain, each new block has a hash value, which is linked to all the previous blocks in the chain.

Proof of Work: In the Bitcoin blockchain, before a new block of transactions can be added to the chain, a computer must work out a hash value to identify it by. Proof of Work is the mathematical process used to determine possible hash values for new blocks of transactions. Essentially, it is a system that sets very strict conditions that every new hash value must meet. This means that the probability of finding a suitable hash value is very low, making it a time and energy intensive process, i.e. requiring a lot of computing power. It is also a random process, so the likelihood of discovering a suitable hash code to process a new block of transactions is evenly distributed across all participating nodes. When a node discovers an acceptable hash code, it can then create a new block and add it to the chain. In exchange for this ‘work’, the node receives newly created Bitcoin. This system makes it impossible to manipulate the Bitcoin cryptocurrency, and acts as an incentive for organisations to provide the computing power to add new transactions to the blockchain.

Throughout this report, we will discuss how these technologies have evolved as blockchain technology has matured, and their practical application within specific use-cases.