There's a lot at stake in 5G, and many players are understandably pushing their own views and strategies hard. Our latest analysis summarises the story so far, the barriers, players and timelines, and how we see it playing out.

The ‘idealists’ and the ‘pragmatists’

In the last 18 months, several different visions of 5G have emerged.

One is the vision espoused by the major R&D collaborations, academics, standardisation groups, the European Union, and some operators. This is the one with the flying robots, self-driving cars, and fully automated factories whose internal networks are provided entirely by ultra-low latency critical communications profiles within the cellular network. The simplest way to describe its aims would be to say that they intend to create a genuinely universal mobile telecommunications system serving everything from 8K streaming video for football crowds, through basic (defined as 50Mbps) fixed-wireless coverage for low-ARPU developing markets, to low-rate and ultra-low power but massive-scale M2M, with the same radio waveform, backed by a single universal virtualised core network “sliced” between use-cases. This slide, from Samsung’s Raj Gawera, sums it up – 5G is meant to maximise all eight factors labelled on the vertices of the chart.

Figure 1: 5G, the vision: one radio for everything 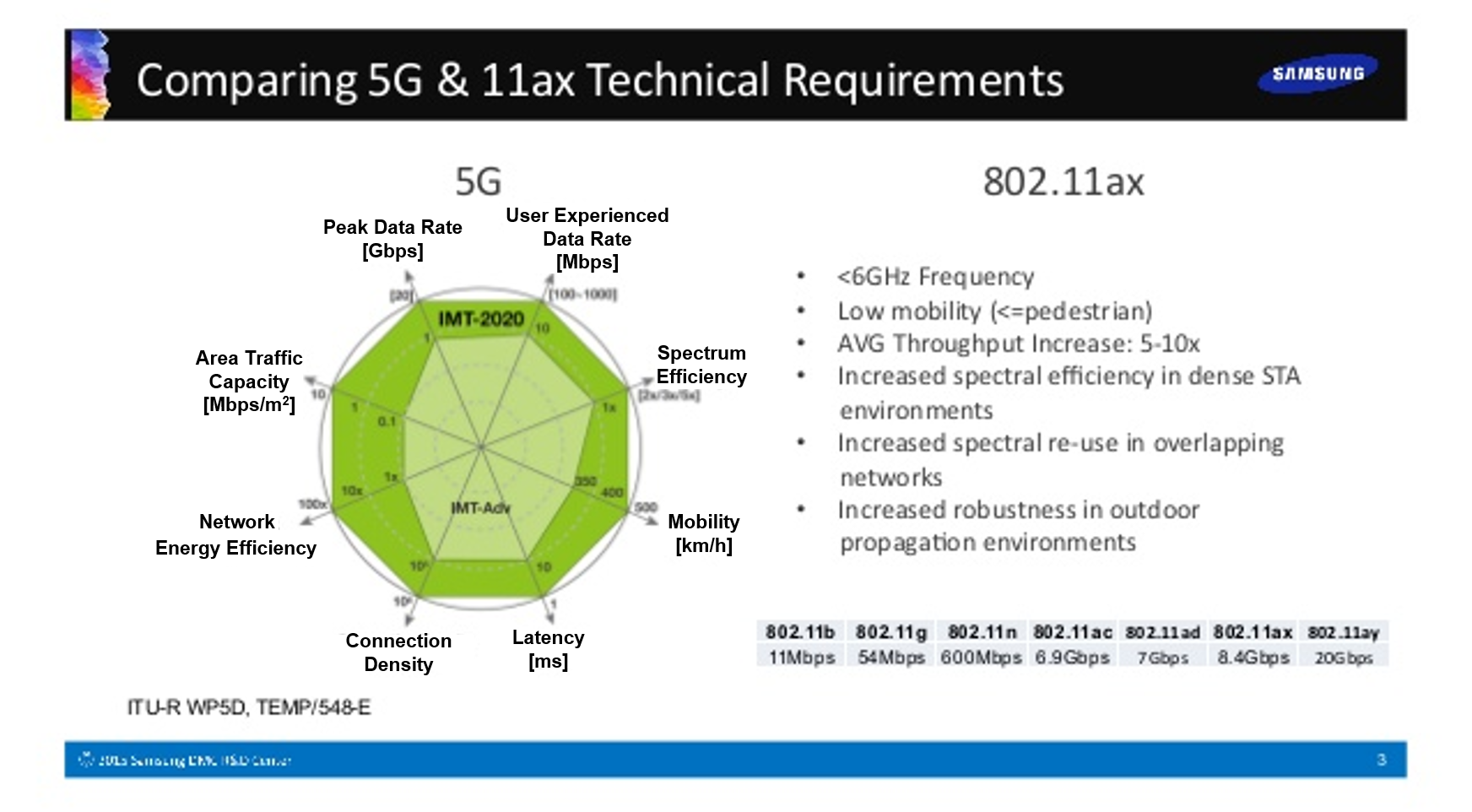 Most of its backers – the idealist group – are in no hurry, targeting 2020 at the earliest for the standard to be complete, and deployment to begin sometime after that. There are some recent signs of increasing urgency – and certainly various early demonstrations – although that is perhaps a response to the sense of movement elsewhere in the industry.

The other vision is the one backed in 3GPP (the main standards body for 5G) by an alliance of semiconductor companies – including Intel, Samsung, ARM, Qualcomm, and Mediatek – but also Nokia Networks and some carriers, notably Verizon Wireless. This vision is much more radio-centric, being focused on the so-called 5G New Radio (NR) element of the project, and centred on delivering ultra-high capacity mobile broadband. It differs significantly from the idealists’ on timing – the pragmatist group wants to have real deployments by 2018 or even earlier, and is willing (even keen) to take an IETF-like approach where the standards process ratifies the results of “rough consensus and running code”.

Carriers’ interests fall between the two poles. In general, operators’ contributions to the process focus on the three Cs – capacity, cost, and carbon dioxide – but they also usually have a special interest of their own. This might be network virtualisation and slicing for converged operators with significant cloud and enterprise interests, low-latency or massive-scale M2M for operators with major industrial customers, or low-cost mobile broadband for operators with emerging market opcos.

The summer and especially September 2016’s CTIA Mobility conference also pointed towards some players in the middle – AT&T is juggling its focus on its ECOMP NFV mega-project, with worries that Verizon will force its hand on 5G the same way it did with 4G. It would be in the idealist group if it could align 5G radio deployment and NFV perfectly, but it is probably aware of the gulf widening rather than narrowing between the two. Ericsson is pushing for 5G incrementalism (and minimising the risk of carriers switching vendors at a later date) with its “Plug-In” strategy for specific bits of functionality.

Dino Flores of Qualcomm, the chairman of 3GPP RAN (RAN = radio access network) has chosen to compromise by taking forward the core enhanced mobile broadband (eMBB) elements for what is now being called “Phase 1”, but also cherry-picking two of the future use cases – “massive” M2M, and “critical” communications. These last two differ in that the first is optimised for scalability and power saving, and the second is optimised for quality-of-service control (or PPP for Priority, Precedence, and Pre-emption in 3GPP terminology), reliable delivery, and very low latency. As the low-cost use case is essentially eMBB in low-band spectrum, with a less dense network and a high degree of automation, this choice covers carriers’ expressed needs rather well, at least in principle. In practice, the three have very different levels of commercial urgency.

Implicitly, of course, the other, more futuristic use cases (such as self-driving cars) have been relegated to “Phase 2”. As Phase 2 is expected to be delivered after 2020, or in other words, on the original timetable, this means that Phase 1 has indeed accelerated significantly. Delays in some of the more futuristic applications may not be a major worry to many people – self-driving cars probably have more regulatory obstacles than technical ones, while Vehicle to Vehicle (V2V) communications seems to be less of a priority for the automotive industry than many assert. A recent survey by Ericsson[1] suggested that better mapping and navigation is more important than “platooning” vehicles (grouping them together on the highway in platoons, which increases the capacity of the highway) as a driver of next-gen mobile capabilities.

3GPP’s current timeline foresees issuing the Technical Report (TR) detailing the requirements for the New Radio standard at the RAN (Radio Access Network) 73 meeting next month, and finalising a Non-Standalone version of the New Radio standard at either RAN 78 in December 2017, with the complete NR specification being frozen by the TSG (Technical Specifications Group) 80 meeting in June 2018, in time to be included in 3GPP Release 14. (In itself this is a significant hurry-up – the original plan was for 5G to wait for R15.) This spec would include all three major use cases, support for both <6GHz and millimetre wave spectrum, and both Non-Standalone and Standalone.

Importantly, if both Non-Standalone and the features common to it and Standalone standards are ready by the end of 2017, we will be very close to a product that could be deployed in a ‘pragmatist’ scenario even ahead of the standards process. This seems to be what VZW, Nokia, Ericsson, and others are hoping for – especially for fixed-5G. The December 2017 meeting is an especially important juncture as it will be a joint meeting of both TSG and RAN. AT&T has also called for a speeding-up of standardisation[2].

The problem, however, is that it may be difficult to reconcile the technical requirements of all three in one new radio, especially as the new radio must also be extensible to deal with the many different use cases of Phase 2, and must work both with the 4G core network as “anchor” in Non-Standalone and with the new 5G core when that arrives, in Standalone.

Also, radio development is forging ahead of both core development and spectrum policy. Phase 1 5G is focused on the bands below 6GHz, but radio vendors have been demonstrating systems working in the 15, 28, 60, and 73GHz bands – for instance Samsung and T-Mobile working on 28GHz[3]. The US FCC especially has moved very rapidly to make this spectrum available, while the 3GPP work item for millimetre wave isn’t meant to report before 2017 – and with harmonisation and allocation only scheduled for discussion at ITU’s 2019 World Radio Congress.

The upshot is that the March 2017 TSG 75 meeting is a critical decision point. Among much else it will have to confirm the future timeline and make a decision on whether or not the Non-Standalone (sometimes abbreviated to NSA) version of the New Radio will be ready by TSG/RAN 78 in December. The following 3GPP graphic summarises the timeline.