As LTE adoption passes 50% in North America and 9% worldwide, we review the operators who did best and worst and draw conclusions for the mass adoption phase of 4G. The analysis provides a valuable template for all players in the 4G race, and has important implications for plans for 5G.

In search of the best practice in 4G deployment, we first had to pick out the operators who did best on quantitative metrics, before we could drill down qualitatively to investigate why. We screened all the 40 MNOs that have so far launched 4G in the BRICS, the United States, the top 5 European markets, China, Japan, Taiwan, and South Korea, on the following indicators.

Where possible, we also collected information on network density (i.e. subscribers per cell), and on spectrum holdings. In Figure 1, we plot EBITDA margin against the change in market share in percentage points since Q4 2012, sizing the bubbles by US dollar monthly ARPU. The axes are set to the average values for each metric.

Figure 1: 8 out of 40 MNOs made the cut for further analysis 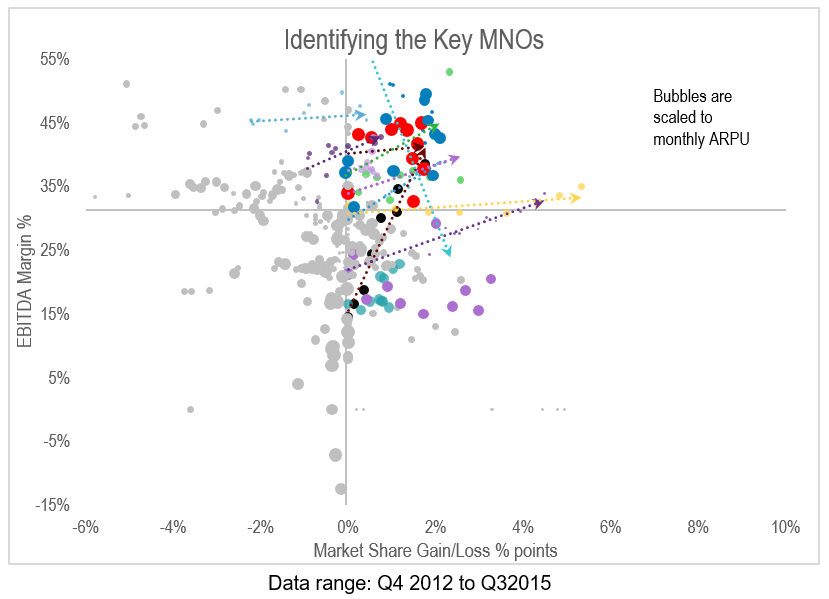 We expected to find that those operators who chose market share first, initiating the price disruptions in the US and in France, would have sacrificed margin as they chased share. An example would be T-Mobile USA, additionally marked in purple on the chart. This is essentially the scenario allegedly needing “market repair” which is dear to the hearts of European telco lobbyists. However, as Figure 2 shows, we found something very different. Profitability is actually gradually increasing with subscriber growth, but only for the top-performing operators. Again, bubbles are scaled to ARPU.