STL’s June 2021 report: Why the consumer IoT is stuck in the slow lane considers the key B2C and B2B2C use cases for Massive IoT technologies – how NB-IoT and LTE-M are evolving and the implications for telcos’ strategies in terms of the consumer Internet of Things.

But uptake varies dramatically by region. At the end of 2020, North East Asia will account for 64% of those 1.7 billion cellular IoT connections, according to Ericsson, a figure it believes will increase to 69% by 2026. That forecast reflects the hugely influential role of the Chinese government, which is pushing the country to lead the world in harnessing the IoT, partly to fulfil its strategic ambitions for artificial intelligence (AI) – the IoT collects much of the real-world data required to train machine learning systems.

The faster-than-expected growth is being driven by the use of conventional cellular connectivity for IoT, rather than NB-IoT and LTE-M. In the consumer market, conventional cellular networks are being used to connect consumer IoT devices such as vehicles, wearables (such as the Apple Watch), asset trackers and security cameras. 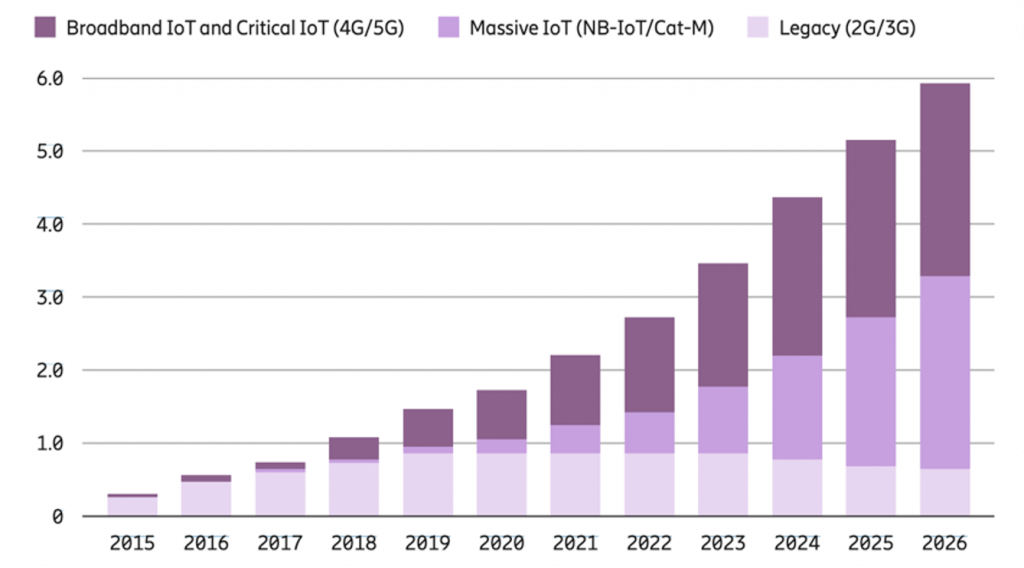 One of the primary reasons for using NB-IoT, in particular, is coverage. It has been specifically designed to deliver data connectivity in locations that other technologies fail to reach. In theory, at least, NB-IoT could cover more of the planet than any other wireless technology by riding on the back of existing cellular infrastructure and extending its reach.

Although most mobile operators publicly back NB-IoT and LTE-M, enthusiasm has waned in some quarters. In March 2020, NTT DoCoMo said it would discontinue the NB-IoT service it launched a year earlier. DoCoMo’s decision may also reflect the fact that devices are increasingly being equipped with both LTE-M and NB-IoT connectivity – chipset and module makers now tend to combine the two technologies in a single solution.

Although some major European operators, including Vodafone, are vocal advocates of NB-IoT, they tend to focus on the business market, as opposed to the consumer internet of yhings. In May 2021, Vodafone reported €800 million in IoT revenues for the year ending March 31st 2021. It predicted the number of connected devices within the Internet of Things will double by 2025, “driven by continued reductions in the cost of computing components, advances in cross-device operability and software, and the near ubiquity of mobile networks.” At the end of March 2021, Vodafone had more 120 million IoT devices connected to its network, including 33 million connected cars.

Some of the leading Internet players have tacitly recognised that Wi-Fi isn’t ideal for many consumer Internet of Things use cases. Amazon, for example, is now rolling out a neighbourhood connectivity service it calls Sidewalk. A shared mesh wireless network designed to cover residential areas with low bandwidth connectivity, Sidewalk has been launched first in the U.S., where it is free to customers. But end-users do need to contribute up to 500MB of data connectivity per month.

These opportunities will be influenced by developments in consumer IoT devices.

Download this report to explore the current primary consumer Internet of Things use cases (in-home and out and about) and their key characteristics.

The report builds on previous STL Partners’ research, including LPWA: Which way to go for IoT? and Can telcos create a compelling smart home?