vRAN will inform operators’ edge strategies: what do those invested in edge computing need to know?

vRAN and edge computing: networking use cases will be key to investment and rollout

The buzz around edge computing has existed for some years now, yet in terms of deployments, edge remains in its infancy. Everyone still wants to know exactly how, when, and where “edge” will be deployed. From manufacturing to gaming, there are a number of touted ‘killer’ use cases. While these need to be carefully evaluated by operators looking to develop edge computing services, there are operator-specific use cases that will also drive their development and investment in edge computing.

One highly significant use case here is vRAN, or virtualised radio access network. Our research estimates that vRAN will be one of the single largest use cases leveraging distributed compute for operators in the short-to-medium term.

vRAN should therefore be a key consideration for stakeholders in the edge computing space. How telcos are thinking about vRAN, and where they plan to deploy it, will play a large role in determining where edge sites are located. Understanding how this situation is likely to develop is important for those evaluating network edge opportunities. 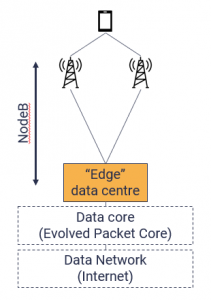 Virtualised RAN involves disaggregating the traditional baseband units into hardware and software components. This has two main benefits. The first, and most important, is that it can reduce capex and opex by breaking vendor lock-in. vRAN, if done through an open approach, means that the RAN components will consist of new baseband unit software functions running off standardised x86 hardware. Therefore, operators will be able to source their RAN equipment more cheaply from a greater range of suppliers, as they are not tied in by proprietary interfaces. The second advantage is that virtualising the RAN enables more advanced flexible use cases such as neutral-hosting, and eventually network slicing.

Virtualising the RAN is not an easy task for operators. Reducing costs will be front of mind. Operators will try to re-use existing infrastructure in many places. We think that vRAN strategies will initially involve consolidation of baseband functions into fewer, more centralised locations (rather than distributing vRAN across thousands of edge nodes). Some are calling these centralised baseband unit hotels.

We spoke to an incumbent operator who outlined their plan to deploy ten of these hotels in a populous but medium-sized country. The expectation is that these hotels will not only serve baseband unit functions but will constitute multi-purpose edge sites. As well being deployed alongside third-party applications, these hotels are also likely to be collocated with distributed core functions.

Incumbent operators such as Telefonica have announced their plans to integrate their Open RAN strategy (of which vRAN is a component) with their MEC (multi-access edge computing) strategy. In a 2019 white paper they illustrate Open vRAN (open interfaces and virtualised RAN) being deployed in central offices and aggregation nodes alongside MEC.

This is not to say that others will not pursue different strategies. In Japan, for instance, Rakuten is deploying a highly distributed edge network to serve its 5G vRAN plans. Indeed, we expect operators to eventually follow suite as they look to enable advanced 5G use cases that require lower latencies and a more distributed edge. However, at least in the near future, we expect centralised vRAN to be more popular. In practise, this means certain well-placed central offices and other technical spaces will be renovated to serve telcos’ edge strategies.

The importance of vRAN to edge has significant consequences for vendors looking to provide IT applications at the edge. They need to understand telcos’ requirements around edge technical spaces which support vRAN (and therefore the mobile network).

Below are the three key considerations those looking to leverage edge need to aware of:

STL Partners will be publishing a full report focused on some of these topics in the coming few months. Check back here for more information once it has been published. To learn more about STL Partners’ network virtualisation and RAN expertise, see our Telco Cloud hub. We recently published a full report on Open RAN, what it means, what telcos are doing, and what they should be doing.

Nikolai Siersted is a Consultant at STL Partners. He is part of STL’s Edge Computing Practice and has worked on a range of a client projects, with a focus on edge and 5G.