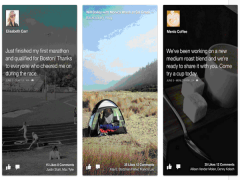 Facebook has launched ‘Facebook Home’, technically a shell around the Android OS, that in theory creates valuable new advertising inventory on the screens of users’ phones. What will its impact be in practice for Facebook, and on Google, mobile operators, and other device manufacturers? (April 2013, Foundation 2.0, Executive Briefing Service, Dealing with Disruption Stream.)
Facebook Home ‘Coverfeed’ April 2013

Smartphones have already transformed the device market but are growth predictions vastly underestimated? Arete Research explain how smartphones growth will mirror that of low cost handsets and reach a billion by 2013. (March 2011, Executive Briefing Service)