In this briefing, we analyse the Digital Commerce 2.0 strategy and progress of the incumbents – the big five Internet players in this market – Amazon, Apple, eBay/PayPal, Facebook and Google.

STL defines Digital Commerce 2.0 as the use of new digital and mobile technologies to bring buyers and sellers together more efficiently and effectively. Fast growing adoption of mobile, social and local services is opening up opportunities to provide consumers with highly-relevant advertising and marketing services, underpinned by secure and easy-to-use payment services. By giving people easy access to information, vouchers, loyalty points and electronic payment services, smartphones can be used to make shopping in bricks and mortar stores as interactive as shopping through web sites and mobile apps.

This executive briefing considers how the rise of smartphones and the personal data they generate is disrupting digital commerce, and explores the mobile commerce strategies of the big five, their strengths and weaknesses and their areas of vulnerability.

Today, California is undoubtedly the epicentre of digital commerce. Amazon, Google, eBay/PayPal, Facebook and Apple are the leading brokers of digital commerce between businesses and consumers in most of the world’s developed economies. Each one of them has used the Internet to carve out a unique and lucrative role matching online buyers and sellers.

But digital commerce is changing fast, forcing these incumbents to innovate rapidly both to keep pace with each other and fend off a new wave of challengers seeking to take advantage of the disruption resulting from the widespread adoption of smartphones, and the vast quantities of real-time personal data they generate. Smartphones with touchscreens, full Internet browsers and an array of feature-rich apps, are turning out to be a game changer that profoundly impacts the way in which people and businesses buy and sell: Digital commerce is moving out of the home and the office and on to the street and in to the store.

As they move around, many consumers are now using smartphones to access social, local and mobile (SoLoMo) digital services and make smarter purchase decisions. This is not a gradual shift – it is happening extraordinarily quickly. Almost 70% of Americans used their mobile devices to look up information while in retail stores between Thanksgiving and Christmas 2012, according to a survey of 6,200 people by customer experience analytics firm ForeSee.

At the same time, the combination of Internet and mobile technologies, embodied in the smartphone, is enabling bricks and mortar businesses to adopt new forms of digital marketing, retailing and payments that could dramatically improve their efficiency and effectiveness. The smartphones and the data they generate can be used to optimise and enable every part of the entire ‘wheel of commerce’ (see Figure 3).

Figure 3: The elements that make up the wheel of commerce 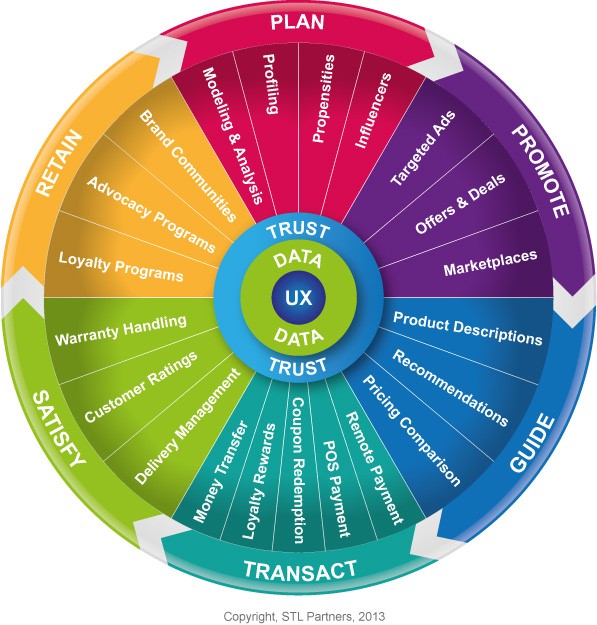 The extensive data being generated by smartphones can give companies real-time information on where their customers are and what they are doing. That data can be used to improve merchants’ marketing, advertising, stock management, fulfilment and customer care. For example, a smartphone’s sensors can detect how fast the device is moving and in what direction, so a merchant could see if a potential customer is driving or walking past their store.

Similarly, local businesses should find sending targeted vouchers, promotions and information, delivered via smartphones, to be much more effective than junk mail at engaging with customers and potential customers. Instead of paying someone to put paper-based vouchers through the letterbox of every house in the entire neighbourhood, an Indian restaurant could, for example, send digital vouchers to the handsets of anyone who has said they are interested in Indian food as they arrive at the local train station between 7pm and 9pm in the evening. As it can be precisely targeted and timed, mobile marketing should achieve a much higher return on investment (ROI) than a traditional analogue approach.

Although the big five – Amazon, Google, eBay/PayPal, Facebook and Apple – are the leading brokers of “traditional” online commerce, they play a far smaller role in brokering bricks and mortar commerce: Their services are typically used to provide just once element of the wheel of commerce. Consumers shopping in the physical world tend to use a mix of services from the leading Internet players, flitting between the different ecosystems. As they shop, they might use Google Maps to locate a store, Facebook to canvas the opinion of friends and Amazon to read product reviews or compare in-store prices with those online. They might even use Apple’s Passbook to redeem a voucher or PayPal to complete a transaction at point of sale.

Although they are all involved to a greater or lesser extent, none of the big five has yet secured a strong strategic position in this new form of digital commerce. Each of them risks seeing their position in the broader digital commerce market being disrupted by the rise of SoLoMo services that seek to meld merchants online and offline sites into a coherent proposition. As the digital commerce pie grows to encompass more and more bricks and mortar commerce, the big five may see their power and influence wane.

As it becomes clear that smartphones and personal data will transform the consumer experience of bricks and mortar shopping, the leading internet companies are being challenged by telcos, banks, payment networks and other companies racing to sign up merchants and consumers for nascent commerce platforms. In most cases, these new entrants are focusing on digitising traditional commerce, but will inevitably also have to compete with Amazon, Google, eBay/PayPal, Facebook and Apple in the online commerce space – consumers will want to use the same tools and platforms regardless of whether they are in the armchair or walking down a street. Similarly, a merchant will want to use the same platform to support its marketing online and in-store, so their customers can redeem vouchers, for example, digitally or in person.

The internet giants are, of course, expanding their SoLoMo propositions to cover more of the wheel of commerce. Amazon, for example, is pursuing this market through its Amazon Local service, which emails offers from local merchants to consumers in specific geographic areas. Google is combining its Search, Maps, Places, Offers and Wallet services into a local commerce platform for merchants and consumers. But global Internet companies based on economies of scale can find it hard to develop commerce services that take into the account the vagaries of local markets.

There is much at stake: Merchants and brands spend hundreds of billions of dollars across the various elements of the wheel of commerce. In the U.S., the direct marketing market alone is worth US$ 139 billion (more than three times the U.S. online advertising market, according to some estimates (see Figure 4).

Figure 4: A breakdown of the U.S. direct marketing and advertising market 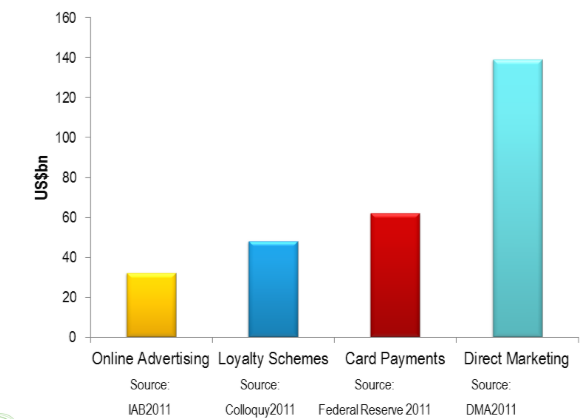 Another way to view the strategic opportunity is to consider the vast amount of money that is still spent on paper-based marketing in local commerce – householders still receive large numbers of flyers through their door, advertising local businesses. Moreover, many merchants still operate crude loyalty schemes that involve stamping a paper card.

Closing the loop: The importance of payments

One of the most important battlegrounds for the big five is the transact segment of the wheel of commerce. Although this segment is only half the size of the promote segment in terms of revenues, according to STL’s estimates (see Figure 5), it is strategically important. Merchants and brands want to know whether a specific marketing activity actually led to a sale. By bridging the online and offline worlds, mobile technologies can close that loop. If a consumer uses their smartphone to research a product and then pay at point of sale, the retailer can see exactly what kind of marketing results in transactions.

Note that payments itself is a low margin business – American Express estimates that merchants in the U.S. spend four to five times as much on marketing activities, such as loyalty programmes and offers, as they do on payments. But Google and Facebook, as leading marketing and advertising brokers, and some telcos, are moving into the payments space to provide merchants with visibility across the whole wheel of commerce.

In general their approach is to roll out digital wallets that can be used to complete both online transactions and point of sale transactions (either using a contactless technology, such as NFC, or a mobile network-based solution). The term digital wallet or mobile wallet generally refers to an application that can store debit and credit card information, loyalty points, electronic vouchers and value. A digital wallet can reside in the cloud or on a specific device or a combination of the two. The big five each have their own digital wallet.

Although Apple and Facebook have only enabled the use of their wallets within their online walled gardens, they are both gradually extending their transact propositions into bricks and mortar commerce.

Figure 5: The relative size of the segments of the wheel of commerce 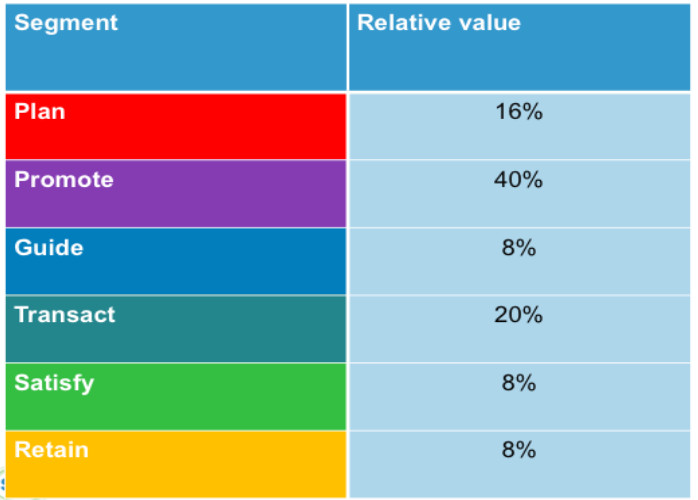 Typically designed to support approximately half of the wheel of commerce (the promote, guide and transact segments), the digital wallet is widely-regarded as an important strategic platform. The theory is that digital wallet suppliers will be well-positioned to interact with consumers while they are shopping, brokering targeted offers and promotions.

Three of the big five – PayPal, Amazon and Apple – have each already signed up tens of millions of users for their online wallets, primarily because they reduce the number of keystrokes and clicks required to complete a transaction online. These Internet players are now weighing up how best to deploy these wallets at point of sale in physical stores. The leading online digital wallet, PayPal, faces increasing competition from leading players in the financial services industry, including Amex and MasterCard (see Figure 6), as well as innovative start-ups, such as Square.

Each of these players is taking a different approach, using different technologies to enabling transactions in store. They are also having to compete with other wallets from companies outside the financial services sector, such as Google, telcos and even retailers. 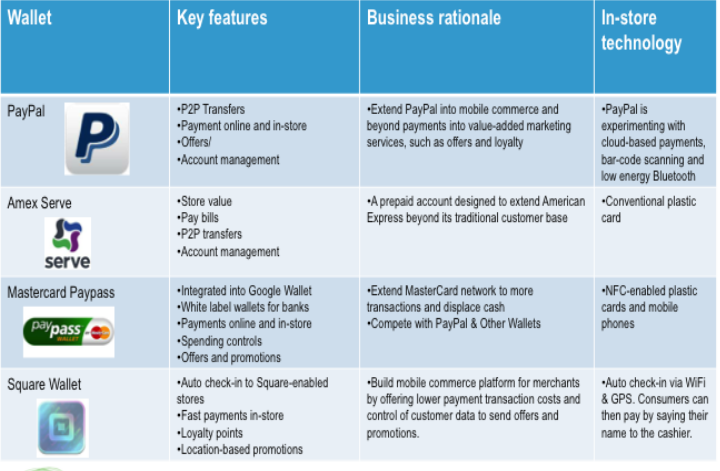 In the transact segment, Google, the leading broker of search-related advertising, is scrambling to catch up, rolling out Google Wallet both to compete with PayPal online and enable payments at point of sale using Near Field Communications (NFC) technology. But the software has been through several iterations without gaining significant traction. At the same time, telcos, such as AT&T, Verizon and T-Mobile in the U.S. (the partners in the Isis mobile commerce joint venture), are developing mobile-centric wallets that use NFC to enable payments at point of sale, supported by the SIM card for authentication. Major retailers are also rolling out digital wallets either individually or as part of a consortium. Figure 7 compares three of the mobile-centric wallets available in the U.S. market.

Figure 7: Examples of Mobile-centric wallets in the U.S. 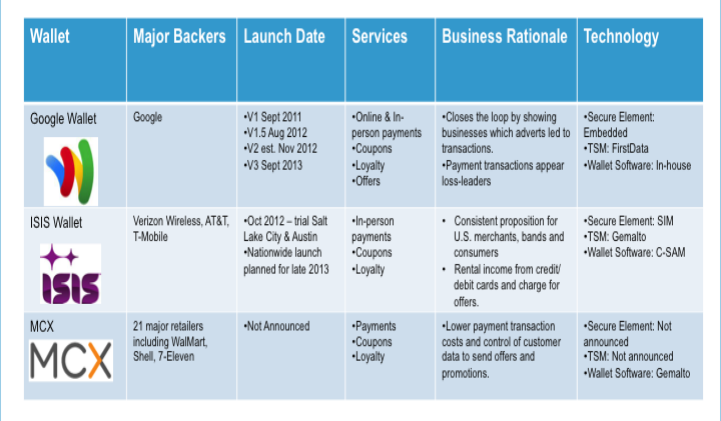