Global telecoms growth has slowed since 2009, but some operators have enjoyed compound annual growth rates of up to 25% over this period. This report examines the financial results of 68 operators over the last seven years, identifies seven successful growth strategies, and evaluates which ones will deliver the best results in 2017 and beyond.

Global, regional and company growth since 2009

For those that have been part of the telecommunications industry over the last 20 years it has been a wonderful ride. Extraordinary growth in fixed-line telecommunications from 1998-2001, as the internet developed, was followed by the explosion in mobile from 2002-2009.

Since 2009, things have been rather different in most markets. Indeed, as the figure below shows, aggregate annual growth from the sixty-eight operators in our group has fallen from over 5% in 2011 to a steady 2-3% from 2013 onwards with no signs of a strong rebound on the horizon.

Aggregate revenue and growth rate for the sixty-eight players, 2009-2016

Some regional differences but growth is slowing for operators everywhere

Operators in Europe and other mature slow-growth markets have focused on building operations in faster growth regions – Telenor, Vodafone, Telefonica, Deutsche Telekom, Orange and others have all expanded into ‘developing’ markets.  The problem is that these developing markets have matured fast from a telecommunications perspective and, although operators hope that growing wealth will translate into higher telecommunications spend, there is little evidence that this is happening in a meaningful way – see the figure below.  It seems that, once low ARPUs have been established in a developing market, intense competition makes raising prices difficult even if mobile broadband demand is rising fast.  This is something we discuss in more detail later. 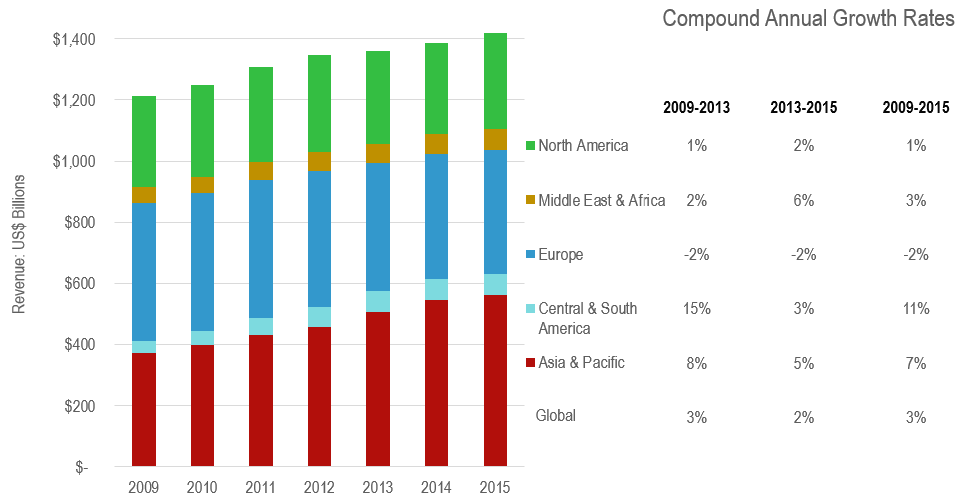 It is worth noting that the figure above reflects where operators are headquartered so, for example, Europe (at a steady -2% growth rate over the period) contains the revenues generated in other markets by the multi-national operators mentioned above. This is true in other markets too. So, for example, Asia-Pacific would include the revenues from Sprint as it is owned by Softbank which is headquartered in Japan.

Nevertheless, because well over 80% of revenues generated in each region are from operators headquartered there, STL Partners is confident that these regional splits and growth rates are relatively accurate and show that all regions have slowed substantially and are now operating in the -2% to 5% per year growth range.