5G is now the main driver of VNF deployment. But can telcos be cloud-native without being hyperscaler-dependent?

The data in the tenth update covers the period up to the end of January 2021, although reference is made in the report to events and deployments after that date. The data is drawn predominantly from public-domain information contained in news releases from operators and vendors, along with reputable industry media. However, it also includes a smaller set of deployment data disclosed to us confidentially by operators and vendors. This information is added to the aggregate data sections of the ‘Tracker’ spreadsheet, which do not refer to the specific solutions supplied or the operators where they were deployed.

We apply the term ‘deployment’ to refer to the total set of virtual network functions (VNFs), CNFs or SDN technology, and their associated management software and infrastructure, deployed at an operator – or at one or more of an operator’s opcos or natcos – in order to achieve a defined objective or support particular services (in the spreadsheet, we designate these as the ‘primary purpose’ of the deployment). For example, this could be:

Accordingly, some of the deployments contained in the database comprise multiple elements, which are listed separately, including details about the category of NFV / SDN / CNF, and vendor and product name where known.

In addition to these mainly public-domain deployments, there are many non-publicised deployments that are inevitably omitted from the ‘Tracker’. However, the ever-growing ‘Tracker’ database now constitutes a considerable body of research that in our view offers a reliable snapshot of the overall market and the main trends in the evolution of telco cloud. In addition, as the ‘Tracker’ contains details only of deployments in live, commercial telco networks (either completed or in progress), this provides a useful corrective to the hype of some vendors’ pronouncements about agreements with operators, which often relate only to collaboration arrangements and preliminary trials, rather than commercial roll-outs.

The one exception to this rule of including only deployments that are implemented to support commercial services is a limited set of data on some of the current live network trials of open and / or virtual RAN (vRAN). The reason for making this exception is the very high level of interest currently in open RAN.

In terms of the telcos included, we limit the database mainly to Tier-One international and national telecoms operators, along with national fixed and mobile operators in smaller markets. For subsequent updates, we may expand the range and types of service providers included, because telco cloud is opening up opportunities for new players to provide cloud- and CNF-based connectivity and related services that are competing strongly with classic telco services.

In this update of the Tracker we have included a deep dive on SD-WAN, which was one of the main early drivers of SDN/NFV deployments, particularly among North American operators. It is worth exploring in more detail because, as it evolves into an increasingly cloud-centric and cloud-native service, it is emerging as another battleground between operators, hyperscalers and vendors.

5G is driving deployments – but will it drive business model change?

This is the first update to the ‘Telco Cloud Tracker’ in 2021, which provides an opportunity to review 2020 and discuss the key trends in 2021.

Despite the global pandemic, the pace of virtualised network function (VNF) deployments has continued at a strong level. 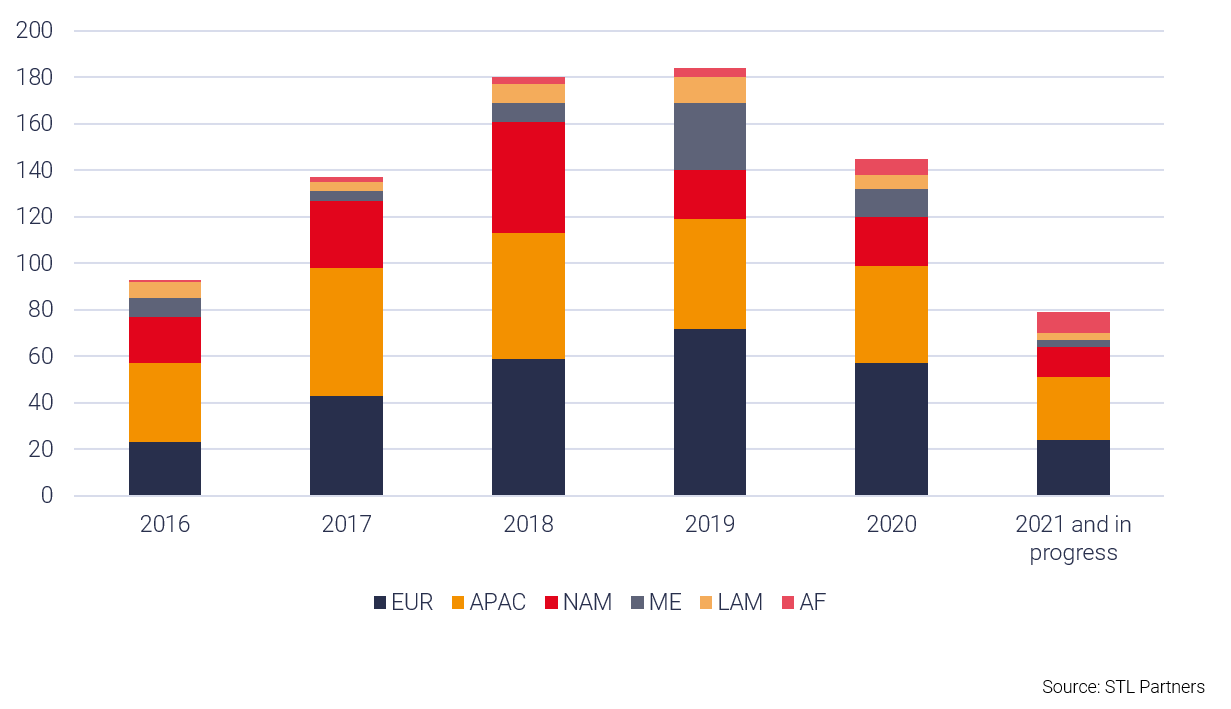 Our projection is that the final number of deployments in 2020 will be at around the same level as 2019 (182 in total). Many live deployments are confirmed some time after the event, swelling the totals for previous years. Accordingly, some of the deployments currently recorded as ‘in progress’ will be added to the tally for 2020.

5G core dominates the scene but is done largely via single-vendor, ‘vertical’ NFV

The main driver of deployments in 2020 was 5G network launches around the world, particularly in the second half of the year. This meant that many Non-standalone (NSA) 5G cores – the platform supporting almost all live 5G networks – also went live, as is illustrated below: 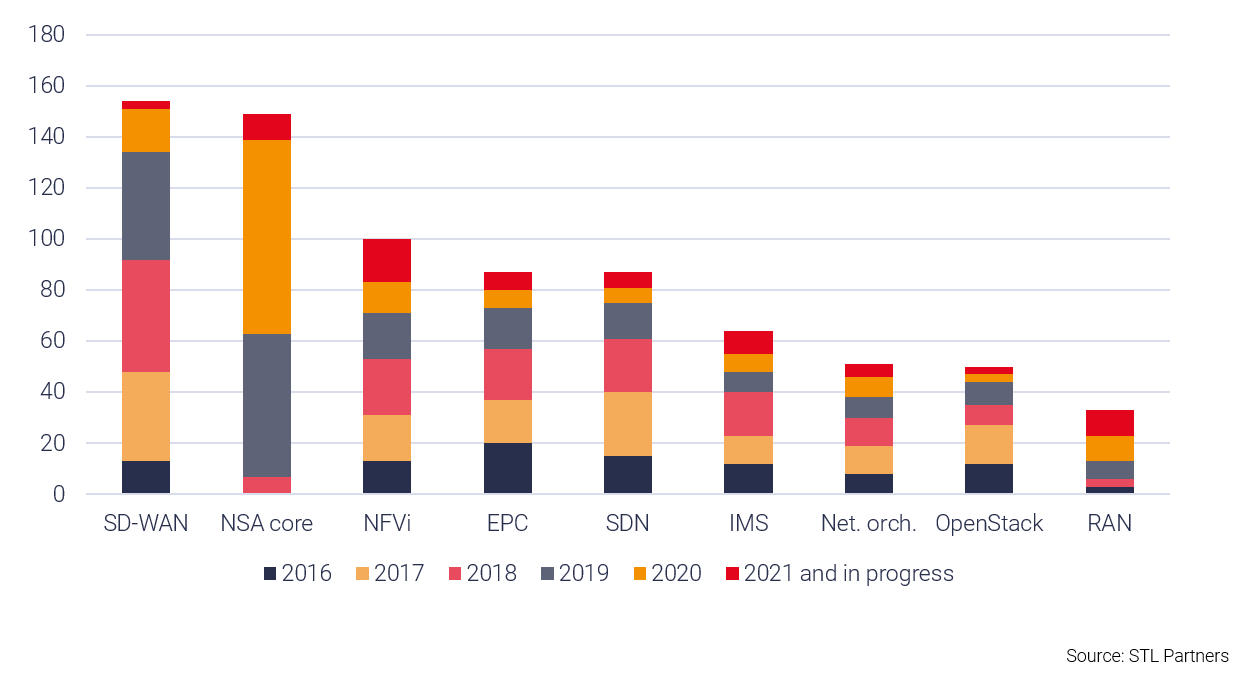 We recorded 76 completed deployments of NSA cores in 2020, up from 56 in 2019. A further ten deployments were either completed or pending in the first quarter of 2021.