The Telco 2.0 team has been travelling a lot recently – spreading the gospel and testing response. For example, some of us were in Dallas last week for the TM Forum’s Management World Americas event, a big show of 1500 people that has traditionally catered for the OSS/BSS industry. The TM Forum is growing in stature fast as its software standards are increasingly being adopted by the cable and media industries as well as telco.

We were invited to sit on a keynote panel on the first day to talk about ‘Telco 2.0’, along with IBM and Oracle’s global communications sector leaders and BT’s CIO. We then took part in a closed-doors session for operators only – CIOs/CTOs from most of the biggest players in the market. Finally a ‘masterclass’ the following day, looking at ‘the future of telecoms’. In the sessions we tested a new definition of ‘Telco 2.0’ (see slides below) which we’ve been working up over the last few months. It seems to be going down very well: “new and progressive” is a common refrain. “We’re doing some of this already, but you’ve clarified the commercial rationale and described a coherent end goal.”

Our focus has been to try to make it very SIMPLE without being simplistic. We’ve found that there is a growing number of people (vendors, trade bodies, pundits, senior industry execs) saying similar things, but we are all using different (and incomplete) ways of saying it. We are starting from different points, or drilling down too quickly into our different domains of expertise.

There’s a lot of talk of ‘the new business model for telecoms’ but no clear and shared definition of what it is. “It’s a bit like the G-spot”, we said flippantly on a panel the other day, “everybody thinks they know what it is, but no one can quite put their finger on it.”

So, we feel that in an industry that thrives on standards, we should create a standard for describing ‘the new business model’. At a high-level the Telco 2.0 Business model can be illustrated below: 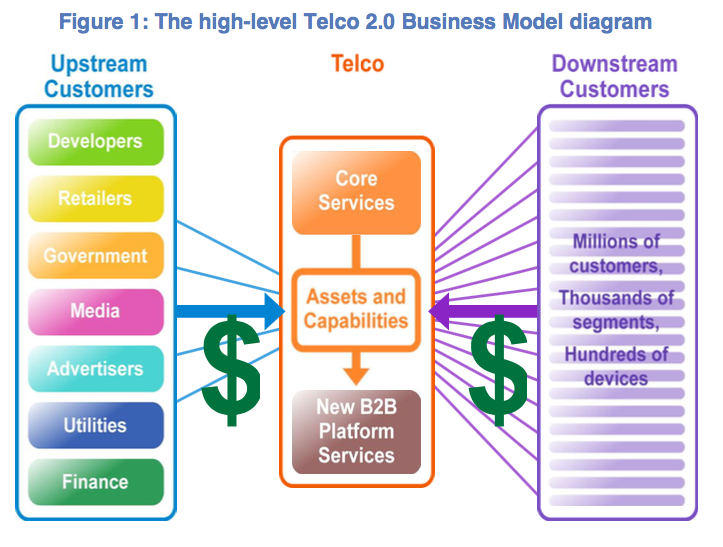 The diagram highlights the critical role of a telecom operator in enabling interactions between its traditional end-user (“downstream”) customers and a variety of new “upstream” parties, such as application developers and media companies. It introduces the concept of “distribution” of Telcos’ core services through these upstream channels, and the addition of a range of value-added B2B services based around the inherent capabilities of the network and service platform.