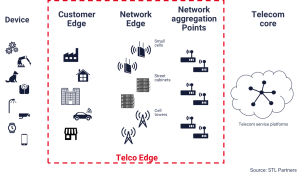 We define telco edge compute as telcos running applications on a distributed compute infrastructure as a service for third parties and internal non-network applications teams. The potential business models vary: from the telco offering ‘co-lo’ style services, to infrastructure-as-a-service to a systems integrator model. We have discussed these in detail in our previous report. Principally, telcos should consider using edge infrastructure not only for running their own network functions but also for running application workloads to deliver new services and improve their customers’ experience.

Telcos have often asked “Where is the edge?” There are multiple potential locations on (and off) the network where telco edge could reside: customer premises, cell towers, street cabinets, and network aggregation points in the access and core network. The decision for where to place the edge really depends on three factors: the telco’s current network architecture, its virtualisation roadmap (i.e. where there are planned data centre facilities for network applications) and the types of use cases the telco will cater to. For example, cell towers, which are located close to the customer edge and have a wider area coverage than street cabinets, would be best suited to provide low-latency communication for autonomous vehicles, allowing cars to make real-time decisions based on their current and future environments.

4) The use case sweet spot: cloud flexibility and local proximity

Telco edge incorporates the benefits of both local computing (on-device or on the premises) and cloud computing. Customers can better run low latency applications, as well as cache or process data close to the data source to reduce backhaul traffic volumes and costs. On the other hand, like cloud, telco edge is flexible and scalable. Unlike on-premise servers, it has the capacity to handle sudden spikes in workloads from unplanned increases in end-user activity and address enterprises’ need to scale when testing and deploying new applications. For mobile applications, edge compute not only needs to scale up and down, but also move across different telco edge locations. 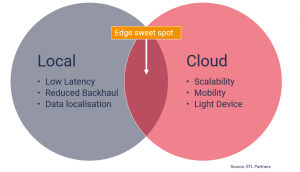 One of the key benefits of edge for enterprises is to reduce the amount of data that has to be sent back to the cloud for storage and processing. This is particularly relevant for applications which generate huge data volumes, such as those in Industrial IoT or high-definition video capture. Reducing the strain on backhaul clearly benefits the telco, as it lowers the associated network and interconnect costs. However, with current pricing models for connectivity, enterprises are not incentivised to run workloads at the network edge that reduce backhaul; they would still be paying the same price whether data travels all the way to the public or private cloud or not. We argue that operators should seek to split the price of access from backhaul and pass on some of the cost savings to the edge customer.

Do we need edge with 5G on the horizon? There is significant overlap in the use cases we talk about when we refer to both: AR/VR, autonomous cars, industry 4.0, IoT etc. Although edge computing supports these low-latency applications, 5G enhances this by improving throughput and reducing latency. In some cases, physics dictates that both are needed to reach sub-10 millisecond latency. One challenge that 5G faces is that deployment will be gradual and focused in major cities to start with. This could undermine adoption of applications such as enterprise AR. Edge compute, in combination with 4G could come to the rescue by enabling work-around solutions in areas where 5G is yet to be rolled out.

The use cases we hear about most are those with millisecond latency requirements: augmented/virtual reality, autonomous cars and drones. Despite the coverage surrounding these applications, they are still far from commercialised, as either the technology is not yet mature or regulation needs to catch up, or both. For example, in anticipation of the arrival of autonomous cars, the UK is proposing a three-year review of the existing law to examine the allocation of responsibility of humans and computers. Alternatively, in the case of AR and VR, the technology is not yet appropriate for many use cases; the size, weight and power requirements of headsets make them impractical for remote use over long periods of time and the devices themselves are expensive.

8) …however, demand may be generated by enterprises in the short term

In recent years, we have seen the trend of enterprises switching to a multi-cloud strategy, a solution that incorporates a mix of on-premise, and public or private cloud. Gartner predicts that multi-cloud will be the preferred strategy for 70% of enterprises by 2019. This is true because a multi-cloud strategy has several key benefits: it optimises compute resources, increases scalability and improves connectivity and security. Telco edge can easily fit into this paradigm and offers an alternative easy-to-deploy option for enterprises, particularly for scaling up applications which previously resided on premises. For example, rather than having to go through a cumbersome process to procure additional servers when growing, an enterprise IT branch manager could deploy new workloads on the telco edge in a matter of minutes.

9) Telco edge compute is complementary to cloud, not a competitor

Given that public cloud computing adoption grew across enterprises in conjunction with enterprise-managed compute infrastructure, telcos planning on offering telco edge services should draw lessons from their success. Rather than viewing telco edge as a competitor to existing solutions, telcos should partner with existing players to create solutions that can be easily adopted – this could mean offering telco edge via a cloud provider platform. Value from the telco will also come from the ability to manage workloads up (to the cloud) and down (to the device or premises) in a seamless way.

Many initiatives have been undertaken to develop telco edge compute, from Deutsche Telekom setting up a US lab for edge computing trials with 5G to HPE planning to invest $4 billion to develop the technology. However, telco edge is still at a nascent stage. It will most likely be implemented first for enterprise use cases, since they do not need wide area telco edge coverage, thus edge can be deployed more easily. Other use cases, such as autonomous cars, will presumably require a longer time to mature, given that they need edge compute to be prevalent across a city, country or even region.

This article was originally posted by Philip Laidler,  STL Partners Consulting Director , on LinkedIn. You can join the debate here.