Where is money being made in edge computing? ​

There is a perception that the edge market has not met expectations and the hype that has been growing over the last four years. It begs the question: Is anyone making money in edge and, if so, how and where? This article cuts through the chatter and presents a pragmatic view for where edge revenues are being made.

STL Partners’ market forecast published in December 2021 forecasted edge computing revenues of USD 22Bn in 2021. Although we had made conservative assumptions, the reality that has played out suggests revenues are lower globally. There is a variety of factors that are contributing to this: lack of available edges (particularly in the network edge), a longer than anticipated lifecycle for enterprises to adopt edge (e.g. using edge for transformational use cases with complex business cases and being stuck in POC) and COVID-19, which has slowed down investments in some sectors. 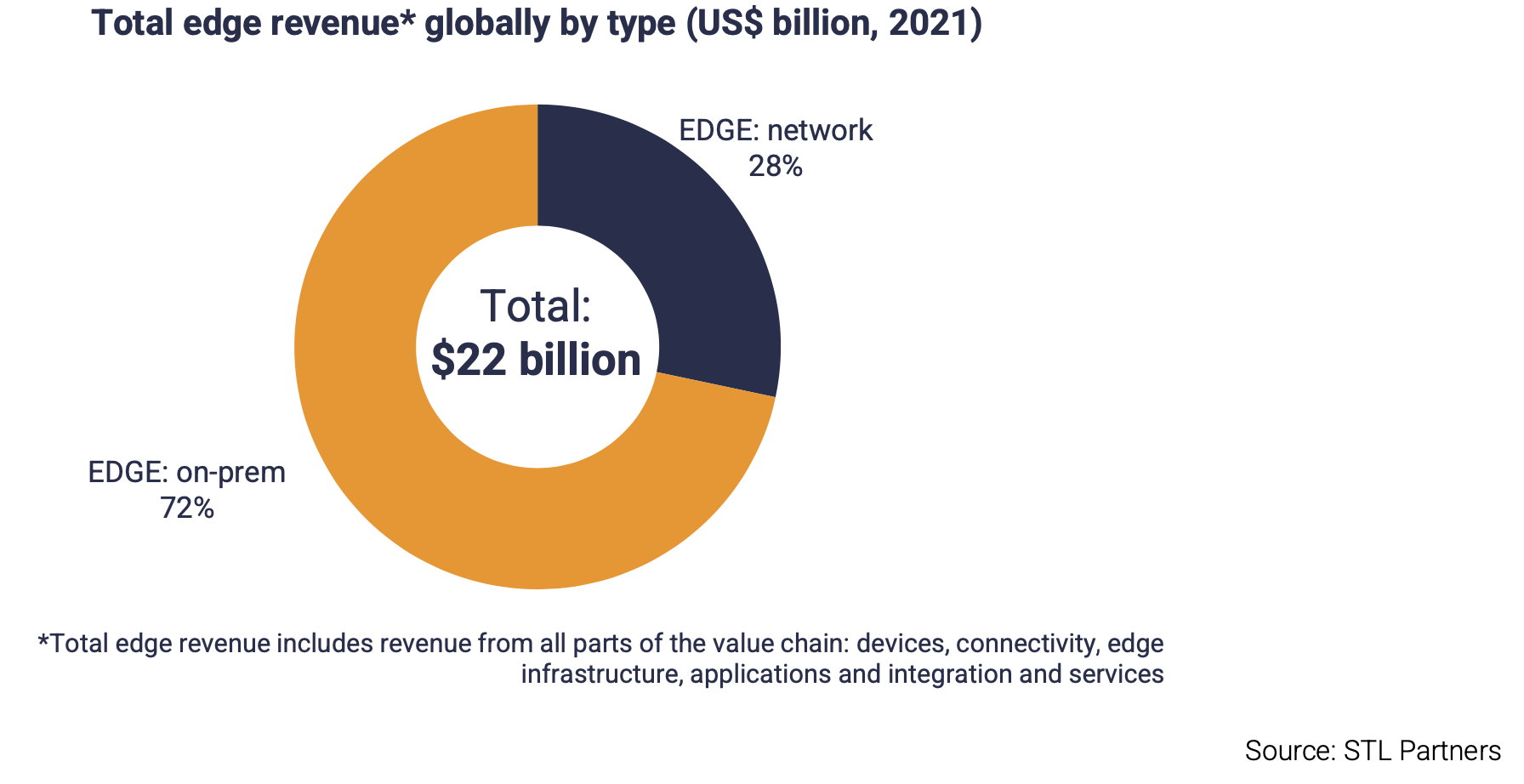 However, 2021 also demonstrated the maturity of the edge market with some consolidation starting to happen in providers of edge products and services, for example Google’s acquisition of MobiledgeX. In addition, we are seeing start-ups and more established edge vendors experiencing growth in the number of sales and adoption of edge computing across their customers.

Nonetheless, there are others who are pessimistic about the near future of edge computing. This article outlines key findings from a series of conversations with STL Partners’ close contacts in the edge computing community to present a nuanced picture of where money is being made.

Where is money being made in edge computing? Observations from the field

Edge computing use cases are often enablers for digital transformation within enterprises, for example using flexible robots in a manufacturing plant to automate processes in the production floor and reduce health and safety. The challenge with implementing such a use case is that it requires change at multiple layers – fundamentally altering the way in which a production process is designed and operated, retraining the entire shop floor workforce to adapt to working alongside robots, ensuring the machines comply with health and safety regulation. Although there is significant investment going into re-architecting robots to make them “edge-ready”, i.e. offloading the processing to a nearby edge rather than on the machine itself, the technology is not yet mature.

Edge vendors who are monetising use cases are seeing quick wins in simpler use cases that do not require huge changes in how the business operates. Examples of these include video surveillance or IoT use cases which shift processing from the cloud to the edge – the application largely remains the same. Other examples which are easier for enterprises to adopt are greenfield use cases – greenfield referring to a new business process (as opposed to changing an existing one). For instance, asset tracking, and although this is not an entirely new use case, enterprises who haven’t yet deployed it find it relatively straightforward to make a business case for to introduce an IoT and edge-based asset tracking system. There often is no alternative business process (i.e. they are not tracking assets).

2. There is no killer use case but video analytics reigns supreme

STL Partners has consistently reinforced the belief that there is no single killer app for edge computing. As with cloud, the proposition hinges on providing a flexible platform that can serve many use cases. Nonetheless, it is clear that video analytics use cases are driving interest and adoption. The combination of high bandwidth applications, (often) a need for low latency processing and (often) the requirement for data to remain locally all point to edge being a solution.

Video analytics use cases range from computer vision types in industrial sectors (e.g. use video analytics to detect faults in operations), checking for tampering of containers at ports, footfall analysis, security/surveillance, as well as using them to customise a user process or customer interaction. In IoT, adding video as a sensor allows enterprises to collect richer data to generate insights and help automate processes.

3. Near term opportunities in public sector, defence and retail sectors

Much of our research on 5G and edge computing has emphasised manufacturing as a sector which is poised to benefit from the technologies greatly. This is still true, but many vendors have found the sales lifecycle to be long, partly due to the transformational nature of the use cases as discussed above, but also because the enterprises are risk averse. Their business cases need to demonstrate there will be significant short term impact; at least 30% in cost savings in the first 2-3 years. This slows down adoption because they will either implement 5G and edge at scale in greenfield facilities only, or require a long process to test the technology in a POC in one part of the production facility first and then slowly roll it out over a number of years.

Some of the practitioners we spoke to highlighted other sectors where they are seeing early adoption. One of these were the public sector and defence. Although budgets vary across countries (often driven by government policy), there is evident willingness to invest in new technologies without the need of the same type of business case that is required by the private sector. There are many projects within the defence sector, particularly in the U.S. and the U.K., where multiple use cases are being tested and deployed. Once proven, these are quickly scaled.

In the U.S., there seems to be good traction of edge in the retail sector, driven by the pressures the sector is facing to meet customer expectations both in the store and online. Some argue Amazon’s entry into the grocery store market in the U.S. has accelerated this further. Edge computing is being explored to “virtualise” traditional equipment used at retailers, e.g. the point of sale (POS) system. By moving to a generic, virtualised compute infrastructure, POS system can become more than a cashier and software updated more regularly. Outside of this, video analytics is driving edge computing adoption, from using video to analyse footfall and customer behaviour in the store, to digital-out-of-home advertising, to conduct queue analysis to better resource the cashiers.

4. Most traction in on-prem edge (not network edge)

It is important to note that much of this demand is focused at the on-premises edge. There are examples of adoption at the network edge but currently this is quite piecemeal and driven by ISVs. The most prominent network edge applications are content and application delivery network (ADN) types: database, security, streaming, web acceleration and caching.

The challenge is that ISVs use edge computing to scale a single application across many edges, but there are very limited numbers of network edges and they are confined to certain mobile networks. A gaming optimisation business reported that they paused their innovation projects with the network edge because they could not see the proposition working. Their customers, gaming companies, would not be interested in a service that only worked for 20-30% of the market. There is good progress being made to federate edges (see STL’s podcast and article on the topic). However, until this happens the opportunity is limited to B2B; any application that serves consumers would see limited value in the network edge.

On the other hand, the use cases described above are often being deployed at the on-premises edge, i.e. at the customer’s premises. We do anticipate that once there is sufficient capacity in the network edge, some of the demand at the on-premises edge will shift to the network edge, particularly if it becomes cost effective to do so and more flexible.

The services that are seeing commercial success are primarily those that support customers to deploy and manage workloads and the underlying infrastructure across a distributed cloud, i.e. cloud and edge, as opposed to only focusing on the edge. Many edge applications are underpinned by container-based infrastructure, sometimes requiring the enterprise to migrate from traditional servers to Kubernetes. These containers need to be deployed easily and scaled across different sites. Vendors that can offer to do this seamlessly across different environments are getting traction from enterprises.

Another model that is getting traction is the end-to-end solutions providers. Vendors are struggling to sell products/capabilities; they need to guide the customer on how the technology will deliver business outcomes, therefore driving a need to be much closer to the use cases and build a strong (application) partner ecosystem.

6. More ISV traction at network edge, but opportunity across both ISVs and enterprise at on-prem edge

Generally speaking, there has been more traction at the network edge from ISVs. Enterprises are further behind when it comes to understanding what edge is and its benefits, whereas (at least some) ISVs have already been exposed to some form of edge (e.g. CDNs or regional edge data centres) and architected their applications to be edge-ready (i.e. in a distributed way, using cloud-native infrastructure).

However, enterprises will be important customers for network edge – either indirectly through the ISV customers, or directly. A single enterprise deal can be orders of magnitude larger than a sale with a developer, but it will take at least two more years for enterprise customers to adopt network edge.

The on-prem edge is a different story where the split is more equal and vendors we spoke to suggested that revenues were almost equivalent, although they expected the traction with enterprises to grow in the next 2 years..

7. Scale is key and has implications for your go-to-market

One of the challenges for edge vendors is that they cannot make a business without scale. A single use case deployed on a single edge server will likely cost more in the cost of sales and delivery than what will be recuperated in revenues. 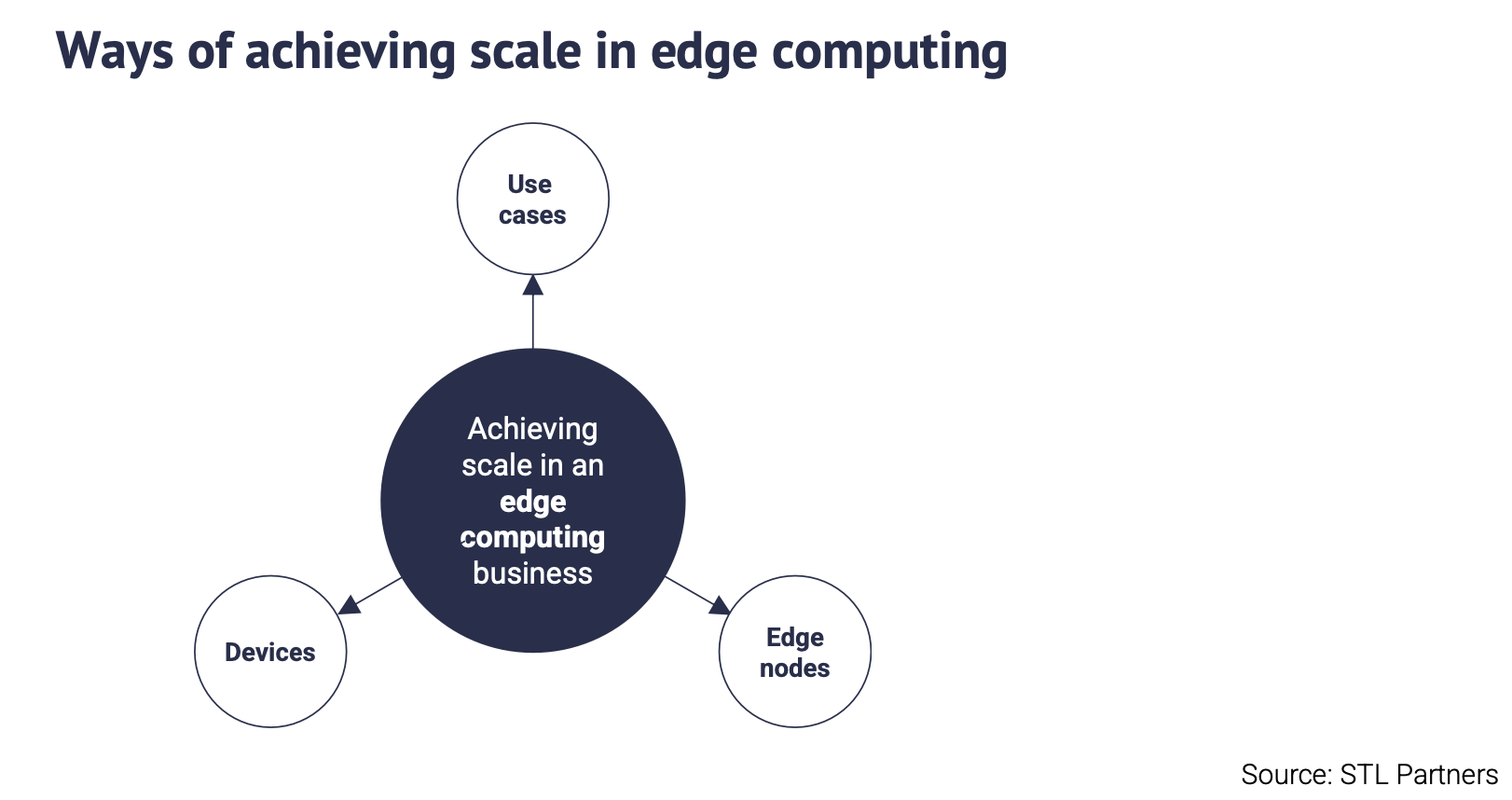 Scale can come in different ways: