Edge computing challenges: 5 reasons why we still do not have large scale deployments

Network edge rollout has been relatively slow despite the ecosystem continuing to explore use cases and trying to drive market adoption. While telcos and other players eye the opportunity, edge computing faces major challenges that the industry needs to face before having ubiquitous edge locations.

As both the market and technology for edge computing continue to evolve, many stakeholders and users might have anticipated a wider availability of edge locations than what is currently deployed. Our edge demand forecast shows that the addressable opportunity of the edge computing market will exceed US$500 billion by 2030 as illustrated in Figure 1.

This is driven by the increased need for improved automation, higher operational efficiency and lower cost across different sectors and use cases. This projected growth represents the demand for both dedicated on-premise edge resources as well as shared network edge locations.

While on-premise edge solutions are available in some markets and deployments are accelerating in line with the growing demand, the network edge is far less mature. Market positions and roles to facilitate the deployments are still to be determined. 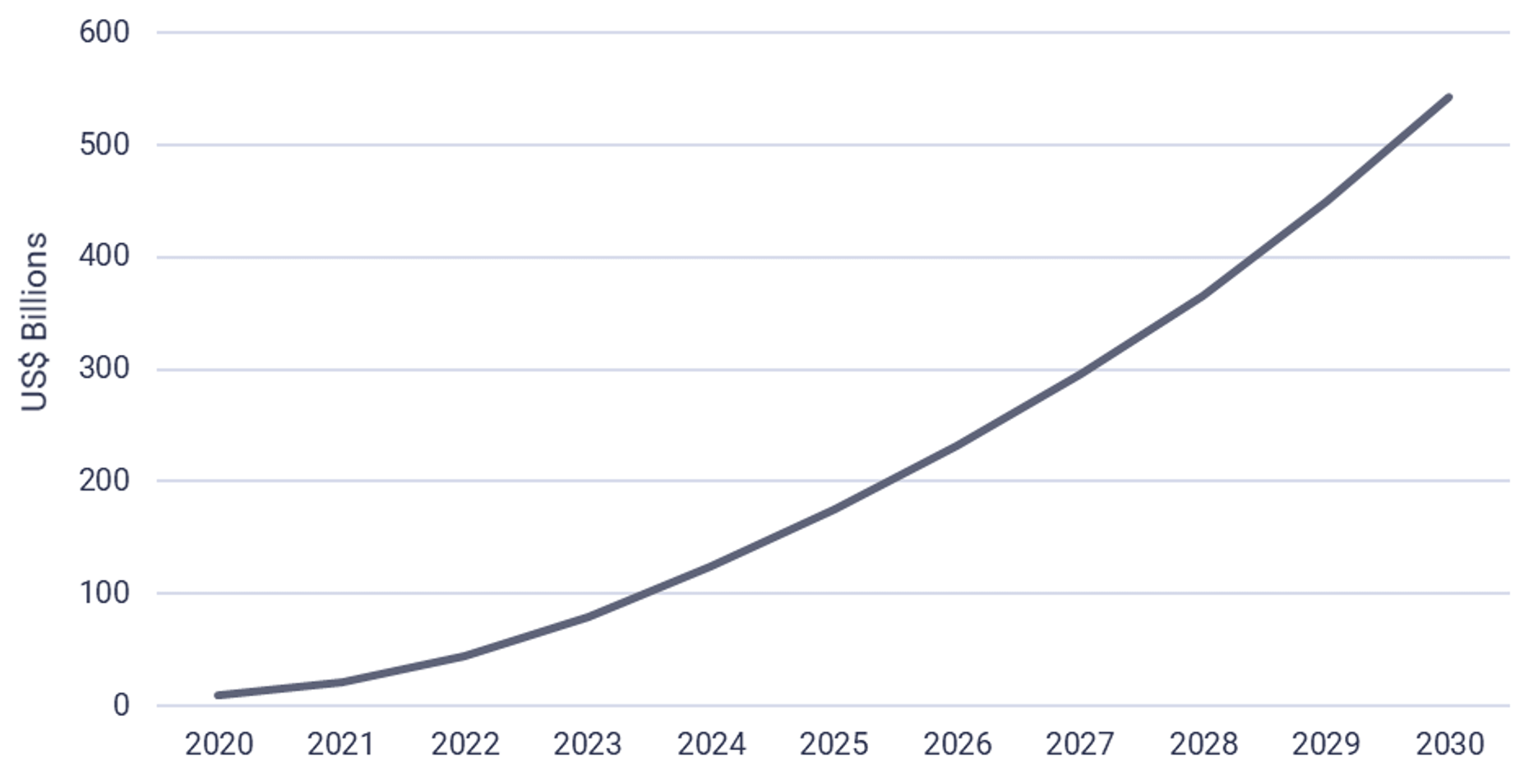 Leading telcos such as Verizon which deployed 17 edge sites with AWS Wavelength and Vodafone which deployed around 4 sites are among the more aggressive adopters of the network edge. Although the US has got more traction than Europe, early adopters across the regions are only deploying or committing to deploy a few sites across their markets. Most telcos have not yet committed to large scale deployments of network edge if any at all.

Many telcos are exploring their options and testing the market through partnerships with hyperscalers and others. But the general census from telcos seems to be that they expect a relatively small scale of network edge deployments over the next few years .

Challenges in scaling the network edge

Building a network edge node is generally a complicated deployment that depends on several factors, unlike an on-premise edge – which as a private deployment, is more in the control of the enterprise. Generally, the activity of telcos within their markets and the wider technology ecosystem are the most important factors in driving the development of network edge. Below are five reasons why establishing a large-scale coverage of network edge nodes is a nascent activity:

#1. The telco business case is still not fully defined

Many use cases would benefit from the support of the network edge such as smart city and automotive applications. However, offering only connectivity and infrastructure to enable these use cases might not translate into an encouraging ROI for telcos. To capture the opportunity, telcos need to explore different business cases and roles within the value chain beyond their traditional connectivity play. The platform and the application spaces are lucrative areas in the edge market and providing end-to-end solutions can help telcos to capture a larger share of the pie. However, that level of verticalisation would require telcos to invest more in understanding vertical market requirements and acquire new skills in application development and system integration to deliver these customised use cases.

#2. The market dynamics and roles are still evolving

Not only the telcos but there are several players such as hyperscalers, data centre providers and neutral host providers that are moving into the edge space with aspirations to leverage the market to expand and strengthen their businesses. They are looking for opportunities across the value chain and, in many cases, their offerings will overlap and compete. In other areas, they have to collaborate to deliver an end-to-end solution. This became evident as telcos started partnering with hyperscalers cautiously to leverage their platforms for the network edge. And although this step started more than two years ago, the partnership deals have slowed down as major tier-1 telcos that are active in the edge space have already either partnered or decided not to partner with hyperscalers. The telco industry, in general, is still assessing how to move forward with hyperscalers as suppliers, partners, and competitors for telcos at various levels.

#3. Telcos are going through major architectural and organisational changes

Telcos are migrating to cloud architecture as they look to virtualise their networks across different layers and functions in the RAN, core, and transport. They also continue to roll out and upgrade their 5G networks while dealing with increasing coverage and capacity demands and an everchanging customer and ecosystem landscape. As explained above, their relationships with their traditional partners, suppliers and competitors are also going through changes that force the telcos to examine their mindset and redefine their priorities. All these require significant investment and effort by different teams within the organisation and will reflect significantly on their edge strategy. The enterprise teams within telcos are usually the ones driving the edge investment, but a successful strategy also requires aligning other teams with these efforts.

Given the investment and commitment highlighted above, telcos are assessing their edge locations carefully. Telcos are weighing up two approaches; building purpose-built sites versus trying to repurpose existing infrastructure like central offices. The former is expensive, especially since most telcos are trying to cut down their capital expenditures where possible. However, the latter approach is very complicated. For example, the existing building structure might not fit the requirements for the racks leading to additional refurbishment costs. Also, If deployed across their access network (at the far edge), telcos risk edge nodes which are costly, under-utilised, and unprofitable. If they only build a few edge nodes, benefits compared to regional edges provided by other players such as neutral host and data centre providers may be relatively small.

While some large multinational companies know about edge computing, the vast majority of enterprises are still figuring out:

The fragmented and complex market state with many different technology vendors and service provider options, while enabling several partnering opportunities, can be challenging for small and new customers that are still exploring their way into the space. Telcos and other players still need to put effort to demystify the edge to the enterprise community and educate them through real use cases but also demonstrate long-term support and commitment to further encourage the adoption.

The network edge indeed serves as a monetisation opportunity for telcos; hence they need to approach it strategically. To capture the opportunity, they need to rapidly solidify their existing position in the infrastructure and connectivity play yet be open to exploring new roles and business models within the value chain.

They need to assess multiple factors including their existing resources, skill gaps, investment capacity, service delivery options and go-to-market routes. Telcos have sites and network capabilities which are attractive to others but if they give away too much value to partners, they may undermine their ability to monetise future services.

Some of the deployment challenges are industry wide and go beyond the telcos’ shortcomings within their markets. For example, educating the enterprise community and defining roles and partnership models for different types of players within the ecosystem. With such issues, telcos should welcome and lead wider conversations within the industry, especially within the telco community, to align efforts and coordinate approaches to drive the adoption and strengthen the telcos’ proposition.

While telcos are busy transforming their networks and migrating to virtualised infrastructure, they risk missing the window of exploring the edge platforms and services and lose the opportunity to shape the industry development. Telcos generally tend to move too slowly, allowing other players such as hyperscalers and other infrastructure providers to lead and dictate the terms related to edge monetisation either on the regional or network edge.