AWS, Azure & Google at the edge: How much of it is telco edge computing?

When we started exploring edge computing about 4 years ago, there were still open questions about:

Aside from question three, most of these have now been answered with a resounding “yes”, a surprise to some. In 2018, there were hints at large edge computing investments from the hyperscalers, although it was unclear where, how and when. Microsoft announced that it would invest $5 billion in IoT and “intelligent edge” and Amazon (Web Services) launched Outposts – an extension of AWS’s core cloud infrastructure and services to data centres and on-premise facilities.

However, when Microsoft announced its partnership with AT&T for network edge computing in 2019, things really heated up. Since then, Microsoft, AWS and Google have made a flurry of announcements on their edge computing offerings and partnerships with telecoms operators globally. March 2020 has been particularly busy, as announcements that were going to be made at Mobile World Congress have been made in a sequence of press releases.

Where does edge fit relative to the hyperscalers’ other strategic initiatives?

All this needs to be put into the context of the hyperscalers’ strategies. Ultimately, they want to see their core cloud business grow and will invest in (sometimes adjacent) opportunities to ensure they maintain and grow their stronghold in the cloud, attract new customers and do more with the existing ones.

The move to edge computing, including on-premises, allows these cloud players to access enterprise customer segments that they had not been able to easily, either because there were potential customers who were not yet ready to migrate to public cloud or they have specific requirements that cannot be met by cloud (e.g. data sovereignty). Through services such as Azure Stack and AWS Outposts, which bring cloud tools to the enterprise site, the hyperscalers can address this customer base. Coupling this with connectivity services, ensures that the enterprise can leverage the hyperscalers’ full spectrum of distributed compute offerings securely and reliably (e.g. AWS VPN and Direct Connect).

In parallel to this, the hyperscalers have been building up their PaaS capabilities, by offering services that allow developers to integrate AI, build blockchain solutions, and enable IoT. These too increase the stickiness of their core cloud IaaS compute, storage, and networking offering.

What is also new is the move to multi-cloud and increased openness. Enterprises are using different forms of IT/cloud infrastructure from multiple vendors and it is becoming increasingly difficult to manage this infrastructure easily. Enterprises look for solutions that can work seamlessly with their diverse systems and infrastructure and tools to help them do so, avoiding vendor lock-in in the process. The recent announcements from the hyperscalers have demonstrated their acknowledgement of this challenge/threat/opportunity. However, this is being addressed in varying degrees across the three companies, with AWS avoiding even using the term “multi-cloud” in its announcements at Re:Invent 2019. This contrasts with Azure and Google pushing forward with Arc and Anthos respectively, which provide orchestration and management capabilities on non-native infrastructure.

In pursuit of new customers, the hyperscalers are starting to invest more in specific verticals. This article focuses on telecoms, which is seen as a key target for hyperscalers, given that it is a relatively fast-moving industry (a shock to peers). Outside of telecoms, we are seeing more messaging and propositions from the hyperscalers that target specific industries, e.g. healthcare, manufacturing and retail.

Scramble for partnerships: telco edge is only one piece of the pie

But, is it overhyped? Dare we say… 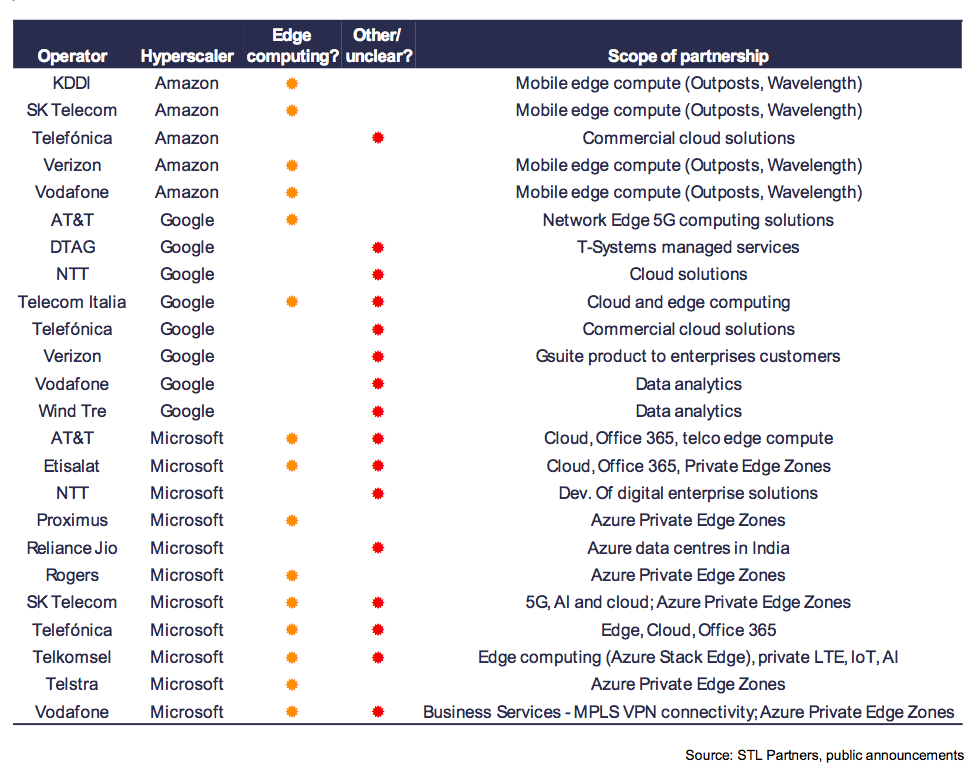 Another question we have been evaluating is how significant the telco edge is for the hyperscalers’ edge strategy. A hyperscale data centre has at least 500 racks; a network edge site is likely to be in the order of magnitude of 10 racks, maximum. Although there will be a higher number of sites, the footprint is still relatively small compared to core cloud, given that AWS/Azure/Google are not slowing down the development of new hyperscale data centres anytime soon.

A final point is remembering that edge compute sites on the telco network can be used for network infrastructure, as well as third party applications. This is exemplified by Microsoft’s acquisition of Affirmed Networks, a virtualised core network solution provider. First of all, Affirmed’s vEPC and other offerings tend to “live” in core data centres, rather than PoPs deep in the network. Telecoms operators will start to distribute their core functions to edge sites, but that is more of a future ambition than a present reality. Affirmed does have its edge break-out offering, Affirmed Cloud Edge, however it is more targeted at enterprise edge, rather than network edge. What the acquisition really allows Microsoft to do is provide a vertical solution to operators, offering both the infrastructure stack (Azure) as well as the application (Affirmed).

Things are moving rapidly in the edge space and we’re aware this article could get outdated very quickly. In the short term, we will continue seeing announcements from the hyperscalers as they partner with telecoms operators increasingly and develop solutions to target both telecoms and other industries more effectively.

The challenge for future partners is to bear in mind the diverse range of capabilities and assets the hyperscalers have. This is an opportunity, as it is beneficial to leverage these capabilities for internal use and to enable new revenue opportunities. On the other hand, the scope of partnerships needs to be considered to avoid cannibalising a telco’s own business and future opportunities.

We discuss the differences between AWS and telcos’ assets in our report How telcos can flex their physical strength, which helps to show how AWS has sought to monetise its assets and what the telcos can learn from its approach.