It’s a natural inclination to imagine that the difference between young people and their elders is simply that they’re young. But at times of rapid technological or social change, quite often, nothing could be more wrong. Instead, patterns of behaviour and culture that you might assume are the caprices of youth will last a lifetime and will become the conservative norm that the youth of the future will rebel against.

Serving the Digital Generation: Innovation for a new breed of customers is Telco 2.0’s attempt to characterise future customers and explore what operators should be doing to better serve them. Statistically speaking, the customer of the future is already with us, in the form of Chinese, South Korean and Japanese youngsters, and is a user of at least one of many social networks, games, and virtual world applications that have sprung up in the last few years. In the report, we analyse a whole range of such services in order to understand the business models and product features that have succeeded.

We identified a number of major factors and new opportunities that constrain and liberate the customer of the future. On one hand, parental paranoia, rapid urbanisation, and proliferating surveillance systems have led to a public space that is ever more restrictive for the young; on the other hand, the digital world has created huge opportunities to escape this and to pursue what we describe as the ’Participation Imperative’. We have developed a framework to help service providers clarify these user needs and how to serve them.

An Introduction to the Participation Imperative Framework? 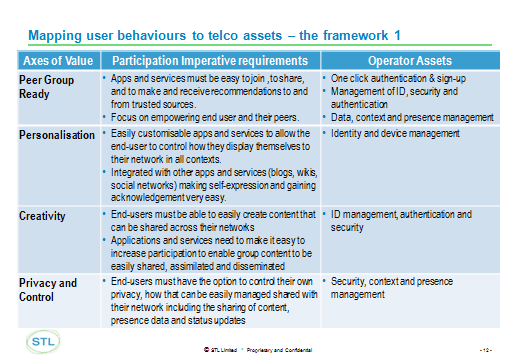 People have a psychological need either to build their identity or to participate vicariously in the identity of others (often through a group identity). In the report, we analysed the innovation processes of operators and other providers, as well as the outputs of this process – products and services – based on the degree to which they help the customer of the future: 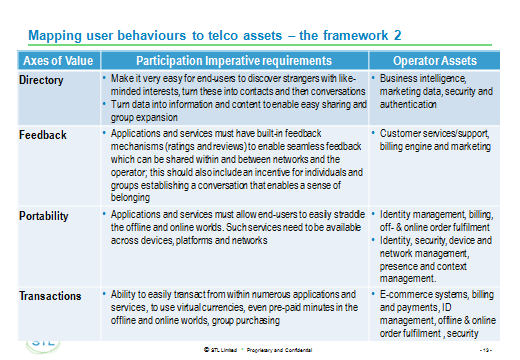 From Participation Imperative Framework to the Two-sided Business Model

Going a step further, we introduce the concept of three basic strategies for two-sided business models:

Strategy One: Give services away up to the point at which a transaction occurs. Amazon Marketplace gives free access to its platform for merchants until they make a sale when they pay for billing and payments services, logistics and distribution etc.

Strategy Two: Subsidise users to build scale and selling other products to them in the as a complement to the free service. The original Lloyds’ Coffee House served this purpose – people were meeting to spread risk and paid for coffee while they did this.

Strategy Three: Charge others for access to the crowd of users you have created through giving away cheap or free services. Google is the classic example here – free search has resulted in billions of Googlers and advertisers are prepared to pay to reach them.

Companies who design their products to meet these needs and integrate more than one of the three strategies have an excellent chance of success. Take QQ, for example, the Chinese IM community-cum-Web portal. IM network user base figures are notoriously vacuous – the services are provided free, many users have multiple accounts, an unknown but non-zero percentage of accounts have multiple users or are used by machines, and there is little stickiness. All these caveats apply to QQ’s claimed total user base, which ranges between 355 million and 570 million accounts. But a much more reliable number is the peak concurrent user base, and a genuinely interesting one is the number of users who actually spent real money. 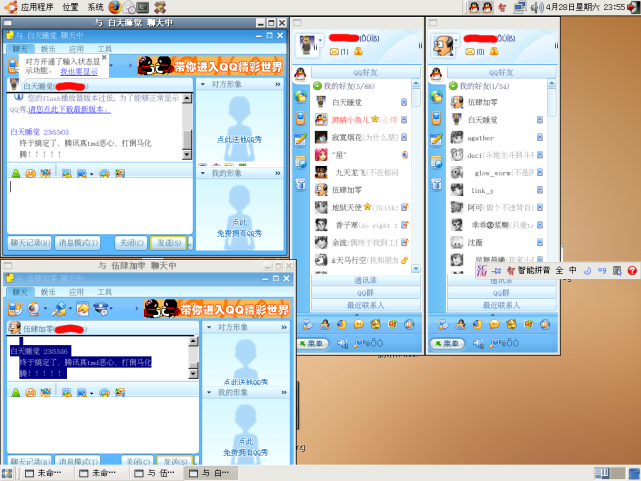 In 2007, the maximum concurrent user figure was 12.3 million; that year, 7.3 million users actually spent money at QQ, or 60 per cent of the lower bound on the user base. This is a much better performance than practically any other IM community or Web social network. In the quarter to October, 2008, the result was profits – profits! – of RMB775m on revenue of RMB2bn, a gross margin of 63.5%! Last year’s peak user figure was 45.3 million, and if the same proportion of sign-ups were converted to sales, this would imply 27 million paying users and an annual ARPU of roughly £10. This is far below even the most bleeding-edge emerging market GSM operators – about one sixth – but then, it’s very likely that a GSM network serving 27 million subscribers would be using more than six times the capital QQ absorbs.

How are they achieving this, when most social-network and IM products aren’t just pre-profits but pre-revenues and indeed pre-money in general?

QQ manages to hit essentially all the elements of the participation imperative framework – creativity, peer-group, personalisation, portability, payments, feedback, and directory. As well as the usual avatars, skins, etc, QQ is relatively open technically speaking and positively encourages its users to invent interesting uses for it (although there has been some conflict about this). Not just that, but it has a business model that lets user innovators profit from their work, by distributing it through the QQ store, which shares the revenue between QQ and the creator – just like the Google App Store. You cannot really do better on creativity and personalisation than that, and it’s telling that user feedback is effective enough that the management has even ignored demands from the Public Security Bureau when the users were sufficiently angry. It’s portable too – there is a version for Symbian and it anyway has SMS interworking.

Obviously, selling apps implies buying them. Like so many games, virtual worlds, and social networks, there is an internal virtual currency. These always face the difficulty of making sure that there is a steady demand for the currency, and specifically, that the demand for currency inside the game exceeds the amount users want to convert back into real currency – otherwise, the owners are faced with a steady cash drain. One of the purposes of selling premium services (blogs, games, and a streaming music service) and apps, avatars and the like is to create a demand for the currency – once it can be used to buy things, its value as a gift or reputation good greatly increases, and so does the demand for it.

This is classically two-sided – QQ gives away the directory and messaging elements of its peer-group play, so as to create a crowd to sell virtual goods to. In a further twist, it’s passing some of the sales revenue on to encourage user creativity. So far, it’s a neat hybrid of Strategies One and Two. Lloyds’ Coffee House wasn’t, after all, in the marine insurance business itself to begin with – it sold coffee. Here, QQ is selling to the crowd, but it is also facilitating transactions between user innovators and others in return for a transaction fee, like Amazon. And QQ shows signs of being very nimble in identifying the different sides – for example, it also offers a paid-for service for business users which is, amusingly, branded “Tencent Messenger” and skinned to look like Microsoft Live Messenger.

This is important because the target market probably isn’t interested in building an identity by impressing the QQ community, and probably won’t spend extended periods of time surfing the community at random – so their other strategies, in-world sales and contextual advertising, aren’t applicable. QQ has identified a segment of their user base that really belongs to the generation before – the e-mail generation, as it were – and realised that a more standard retail strategy is appropriate.

As far as Strategy Three goes, ads seem to be the default option for monetisation globally but, so far, only Google has been a real hit. QQ carries ads, but a non-trivial percentage of users are using unofficial clients created by the hacker ecosystem to filter them out – hence there’s a degree of tension with the innovators. However, QQ risks throwing the baby out with the bathwater because 66% of revenue originates from sales of applications, goods and premium services, compared to 11% from advertising. Further, sales revenue is growing at around 90%, better than the business as a whole, whereas ad revenue is growing at 70%, which means it’s actually shrinking in importance to the company.

Instead, QQ is beginning to look at virtual-real hybridisation as a source of future growth – there is already a streaming music service, and they recently started a dating site.