Mobile Linux foundation LiMo‘s presence at the Mobile World Congress was impressive. DoCoMo demonstrated a series of handsets built on the OS; and LG & Samsung showed a series of reference implementations. But more impressive than the actual and reference handsets were the toolkits launched by
Access & Azingo. 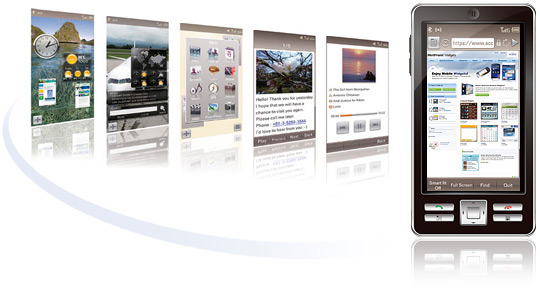 We believe that LiMo has an important role to play in the Mobile Ecosystem and the platform is so compelling that over time more and more handsets based upon the OS will find their way into consumers hands. So why is LiMo different and important?

In a nutshell, it is not owned by anyone and is not being driven forward by any one member. Symbian and Android may also be open-source, but no-one has any serious doubt who is paying for the majority of the resources and therefore whether consciously or sub-consciously whose business model they could favour. The LiMo founder members were split evenly between operators (DoCoMo, Vodafone and Orange) and Consumer Electronic Companies (NEC, Panasonic & Samsung). Since then several other operators, handset makers, chip makers and software vendors have joined. The current board contains a representative sample of organisations across the mobile value chain.

LiMo as the Unifying Entity

The current handset OS market reminds us very much of the days when the computing industry shifted from proprietary operating systems to various mutations of Unix. Over time, more and more companies moved away from proprietary extensions and moved them into full open source. Unix was broken down into a core kernel, various drivers, thousands of bytes of middleware and a smattering of User Interfaces. Value shifted to the applications and services. Today, as open source has matured each company can decide which bits of Unix they want to push resources onto to develop further and which bits they want to include in their own distribution. 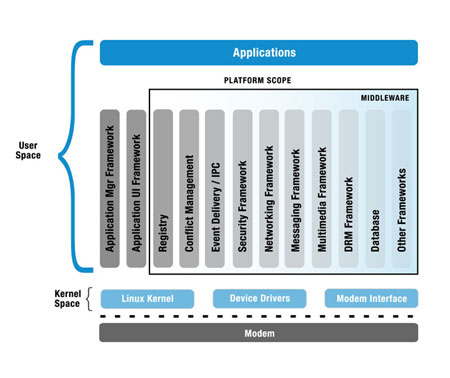 The reason that Unix developed this way is pure economics – it is just too expensive for many companies to build and maintain their own flavours of operating systems. In fact there is only currently two mainstream companies who can afford to build their own – Microsoft and Apple – and the house of Apple is built upon Unix foundations anyway. Today, we are seeing the same dynamics in the mobile space and it is only a question of time, before more and more companies shift resources away from internal projects and onto open-source ones. LiMo is the perfect home for coordinating this open-source effort – especially if the Limo foundation allows freedom for the suppliers of code to develop their own roadmap according to areas of perceived value and weakness.

LiMo should be really promiscuous to succeed

In June 2008, LiMo merged with the LiPS foundation – great news. It is pointless and wasteful to have two foundations doing more or less the same thing, one from a silicon viewpoint and the other from an operator viewpoint. Just before Barcelona, LiMo endorsed the OMTP BONDI specification and announced that it expects future LiMo handsets using a web runtime to support the BONDI specification. Again, great news. It is pointless to redo specification work, perhaps with a slightly different angle. These type of actions are critical to the success of LiMo – embracing the work done by others and implementing it in an open-source, available to all manner.

Compelling base for Application Innovation

The real problem with developing mobile applications today is the porting cost to support the wide array of operating systems. LiMo offers the opportunity to radically reduce this cost. This is going to become critical for the next generation of devices which become wirelessly connected, whether machine-2-machine, general consumer devices or niche applications serving vertical industries. For the general consumer market, the key is to get handsets to the consumers. DoCoMo has done a great job of driving LiMo-based handsets into the Japanese market. 2009 needs to be the year that some European (eg Vodafone) or US (eg Verizon) deploy handsets in other markets.

Also, it is vital that the operators also make available some of its internal capabilties for use directly by the LiMo handsets and allow coupling to externally developed applications. These assets are not just the standard network services, but also internal service delivery platform capabilities. This adds benefits to the cost advantage that LiMo will ultimately have over the other handset operating systems. As in the computing world before, over time value will move away from hardware and operating systems towards applications and services. It is no accident that both Nokia and Google are moving into mobile services as a future growth area. The operators need an independent operating system to hold back their advance onto traditional operator turf.

We feel that as complexity increases in the mobile world, the economics of LiMo will become more favourable. It is only a matter of time, but LiMo market share will start to increase – the only question is the timeframe. Crucially, LiMo is well placed to get the buy-in of the most important stakeholders – operators. Operators are to mobile devices as content creators were to VHS; how well would the iPhone have done without AT&T?

The recent purchase of Symbian by Nokia highlights the tensions around running a consortium-owned platform business. Obviously, Nokia believes that making the software royalty-free and open source is the key to future mass adoption. While Nokia is busy buying Symbian, the competition has moved on and offers a lot more than purely handset features. The team at Telco 2.0 disagree and believe the creation of the Symbian Foundation will cure none of the governance or product issues going forward. Additionally, Symbian isn’t strong in the really important bits of the mobile jigsaw that generates the real value to any of the end-consumer, developer or mobile operator.

In this article, we look at the operating performance of Symbian. In a second we examine the “openness? of Symbian going forward, since “open? remains such a talisman of business model success.

Symbian’s core product is a piece of software code that the user doesn’t interact with directly — it’s low-level operating system code to deal with key presses, screen display, and controlling the radio. Unlike Windows (but rather like Unix) there are three competing user interfaces built on this common foundation: Nokia’s Series 60 (S60), Sony Ericsson’s UIQ, and DoCoMo’s MOAP. Smartphones haven’t taken the world by storm yet, but Symbian is the dominant smartphone platform, and thus is well positioned to trickle down to lower-end handsets over time. What might be relevant to 100m handsets this year could be a billion handsets in two or three years from now. As we saw on the PC with Windows, the character of the handset operating system is critical to who makes money out of the mobile ecosystem.

The “what? of the deal is simple enough — Nokia spent a sum of money equivalent to two years’ licence fees buying out the other shareholders in Symbian, before staving off general horror from other vendors by promising to convert the firm into an open-source foundation like the ones behind Mozilla, Apache and many other open-source projects. The “how? is pretty simple, too. Nokia is going to chip in its proprietary S60, and assign the S60 developers to work on Symbian Foundation projects.

The generic problem with consortium is typically not all members are equal and almost certainly have different objectives. This has always been the case with Symbian.

It is interesting to note that: Siemens is out of the handset business, Panasonic doesn’t produce Symbian handsets (it uses LiMo), Ericsson only produces handsets indirectly through SonyEricsson, and Samsung is notably permissive towards handset operating systems.

SonyEricsson has been committed towards Symbian at the top end of its range, although recently is adding Windows Mobile for its Xperia range targeted at corporates.

Nokia seems almost committed though has recently purchased Trolltech — a notable fan of Linux and developer of Qt.

The tensions within the shareholders seem obvious: Siemens was probably in the consortium for pure financial return, whereas for Nokia it was a key component of industrial strategy and cost base for its high-end products. The other shareholders were somewhere in between those extremes. The added variable was that Samsung, Nokia’s strongest competitor, seemed hardly committed to the product.

It is easy to produce a hypotheses that the software roadmap and licence pricing for Symbian was difficult to agree and that was before the user interface angle (see below).

Going forward, Nokia has solved the argument of licence pricing — it is free. Whether this passed to consumers in the form of lower handset prices is open to debate. After all, Nokia somehow has to recover the cost of an additional 1,000 personnel on its payroll. For SonyEricsson with its recent profit warning, any improvement in margin will be appreciated, but this doesn’t necessarily mean a reduction in pricing.

It also seems obvious that Nokia will also control the software roadmap going forward: it seems to us that handset operators using Symbian will be faced with three options: free-ride on Nokia; pick and choose components and differentiate with self-build components; or pick another OS.

We think that given the chosen licence (Eclipse — described in more detail in next article), plus the history of Symbian user-interfaces, and the dominance of Nokia, all point towards other handset operators producing their own flavours of Symbian going forward.

Nokia may have bought Symbian, even without competitive pressures, purely to reduce its own royalties. However, the competitive environment adds an additional dimension to the decision.

RIM and Microsoft are extremely strong in the corporate space and both share two features that Symbian are currently extremely weak in — they both excel in synchronizing with messaging and calendaring services.

Apple has also raised the bar in usability. This is something where Symbian has stayed clear, but is certainly not one of the strengths of S60, the Nokia front end. The wife of one of our team — tech-savvy, tri-lingual, with a PhD in molecular biology — couldn’t work out how to change the ringtone, and not for lack of trying. What do you mean it’s not under ‘settings’? Some unkind tongues have even speculated that the S60 user interface was inspired by an Enigma Machine stolen to order by Nokia executives.

Qualcomm is rarely mentioned when phone operating systems are talked about, and that is because they take a completely different approach. Qualcomm’s BREW would be better classified as a content delivery system, and it is gaining traction in Europe. Two really innovative handsets of last year, the O2 Coccoon and the 3-Skypephone, were both based upon Qualcomm software. Qualcomm’s differentiator is that it is not a consumer brand and develops solutions in partnership with operators.

The RIM, Microsoft, Apple and Qualcomm solutions share one thing in common: they incorporate network elements which deliver services.

Nokia is of course moving into back-end solutions through its embryonic Ovi services. And this may be the major point about Symbian: it is only one, albeit important piece of the jigsaw. Meanwhile, as we’ve written before, Ovi remains obsessed around information and entertainment services, neglecting the network side of the core voice and messaging service. Contrast with Apple’s first advance with Visual Voicemail.

As James Balsillie, CEO of RIM, said this week “The sector is shifting rapidly. The middle part is hollowing — there are cheap, cheap, cheap phones and then it is smartphones to a connected platform.��?

Jan 1999 – Symbian acquires Ronneby Labs from Ericsson and with it the original UIQ team & codebase.